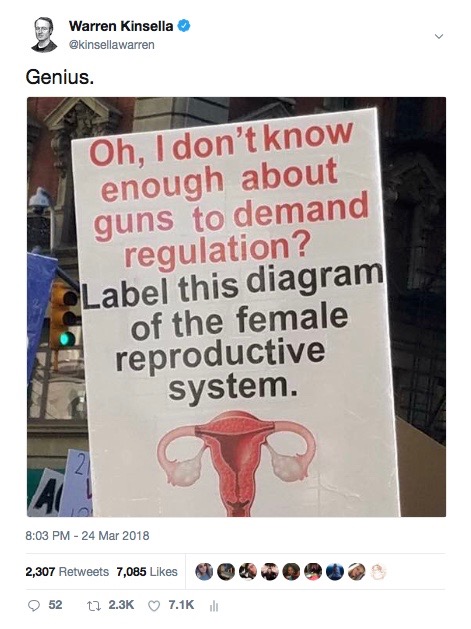 I could be wrong, but I’m pretty sure this is the most-noticed tweet I’ve ever sent out into the Internet ether.

It’s a photo of a woman holding a funny but important message, at this past weekend’s March For Our Lives.  One word description, that’s it.

What it tells me is that social media – previously the exclusive preserve of the Troll-in-Chief, Donald Trump, and his feral winged monkeys – is possibly getting a lot more progressive.  That tweet was pro-women, anti-gun – and it took off like a rocket.

The so-called whistleblower in the Cambridge Analytica scandal is testifying before the British Parliament as I type this.  CBC is covering it live – because he’s a Canadian, and because he and his cabal were paid plenty to do work for the Canadian Liberals, the British Brexiteers and the American Republicans.  All of whom won, hugely, in circumstances where no one – no one – thought they would.  And now people are taking notice and speaking out.

All of this comes together to suggest to me that something is happening out, there, perhaps.  Something positive.

We shall see.  In the meantime, I remain amazed about that one little tweet.