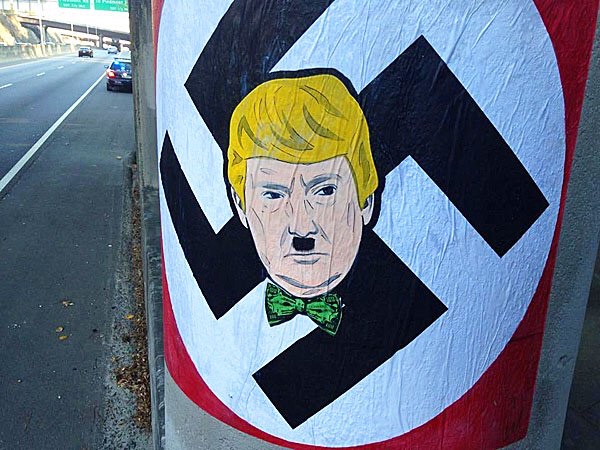 British Prime Minister Theresa May, who lately knows a thing or two about unsubtle truths, offered up a perfectly English way of describing it all: “Difficult.”

The G7 summit, that is. “This was a difficult summit, with at times some very candid discussions,” May told MPs in the House of Commons. “The United Kingdom, with our allies and partners, will continue to play our part in promoting…the rules-based international order.”

Except, of course, there is no “rules-based international order” anymore. With the exception of the one that Vladimir Putin has unleashed on the West, “rules” and “order” are now decidedly oxymoronic. The new new order – characterized by chaos and disunity and the disintegration of democratic institutions – is the one that prevails, now.

Donald Trump is the embodiment of the new world disorder, and also the glowering face of it. Even the Britons most disinterested in politics knows that much. Down at the bustling Camden Market, above all of the knock-off Nike and Thrasher stuff, there is one T-shirt that is a big seller: one featuring a face, with Donald Trump on one side, and with Adolf Hitler’s on the other.

Just past the Hitler-Trump T-shirts, in an old British Rail yard, is the spot where the Clash practiced, a place called Rehearsal Rehearsals. The legendary punk group posed for their first album cover there, too, and wrote many of the political anthems found on that record.

“Yankee dollar talks, to the dictators of the world,” the Clash’s Joe Strummer howled on their song, ‘I’m So Bored Of The USA.’ “In fact it’s giving orders, and they can’t afford to miss a word!”

Not much, then or now. Trump – as despotic and as deranged as he is – is indisputably in charge. Per Strummer, he’s not just talking, but giving orders.  We listen.

That was the part of the G7 summit in Québec that was the hardest to bear, for the British Prime Minister and our own: being obliged to listen to Trump. Being again forced to take seriously the rantings and ravings of the most unqualified President of the United States in history.

That, too, was the significance of that now-infamous photo, the one that was everywhere to be seen here in London, in the dispiriting day’s following the worst-ever G7 summit: the G7 leaders and advisers sombrely gathered around Germany’s Angela Merkel, as she stood like a schoolteacher above a pouting Trump, his arms crossed, the petulant child. Merkel looked to be imploring Trump about some point, and Justin Trudeau (revealingly, perhaps) was not even in the frame.

“Tense boardroom” is a bit of an understatement. Trump arrived late at the G7, departed early, and left frustration and consternation in his wake. On his way out of town, most notably, Trump lashed out at his host, Trudeau.

Trump said Trudeau was “dishonest.” He said Trudeau was “weak.” He said that Trudeau’s comments about the collapse of the G7 – which were bland and benign diplomatic politesse, and nothing particularly new – were going to “cost the Canadian people a lot of money.”

Trump’s advisors piled on, too. “There’s a special place in Hell for any foreign leader that engages in bad faith diplomacy with President Donald J. Trump and then tries to stab him in the back on the way out the door,” said Trump trade adviser Peter Navarro.

Not since John F. Kennedy raged about John Diefenbaker – not since Lyndon B. Johnson grabbed Mike Pearson by the lapels and shook him – have Canada-U.S. relations been this truly bad. Trump’s attacks on Trudeau – and, to a lesser degree, his dismissal of the G7 what May calls the rules-based international order – left the pundits and the experts in a lather.

Not this one, I confess. As I observed on Twitter, Trump’s preferred social media platform, “Justin Trudeau’s relationship with Donald Trump was always going to reach this nadir: Trump is a dishonest, disgusting thug. No campaign of servility was ever going to change that. But, now that it has, every Canadian should rally to Trudeau’s side.”

And, with the notable exception of the tin-eared Andrew Scheer, Canadians have rallied to Trudeau’s side. From Doug Ford in Ontario to Jason Kenney in Alberta, even Trudeau’s fiercest partisan critics were outraged by Trump’s attacks on a Canadian Prime Minister, and on Canada’s economy.

Meanwhile, Trudeau’s Trump charm offensive – up to and including pretending to take seriously Trump’s daughter, who was previously was only known for designing ugly handbags – was left in ruins at the G7. The thirty-plus phone calls, the many bizarre handshakes – the solicitous tilt of Trudeau’s tousled head, as he feigned interest in Trump’s inanities – all came to naught. Nothing was as important as rescuing NAFTA, a PMO senior staffer told me last year, and now NAFTA appears Canadian completely doomed.

Despite having no major legislative success to point to – despite the India imbroglio, despite the #MeToo moments, despite falling behind an uninspiring opponent in fundraising and the polls – Trudeau was politically rescued by the G7. Trump’s extraordinary attacks on the Canadian Prime Minister have united Canadians like they have seldom been before. He may be an imperfect Prime Minister, but he is our Prime Minister, after all.

The G7 may have made for some “very candid discussions,” as the British Prime Minister said. But they also made for something else: Justin Trudeau’s inevitable re-election.