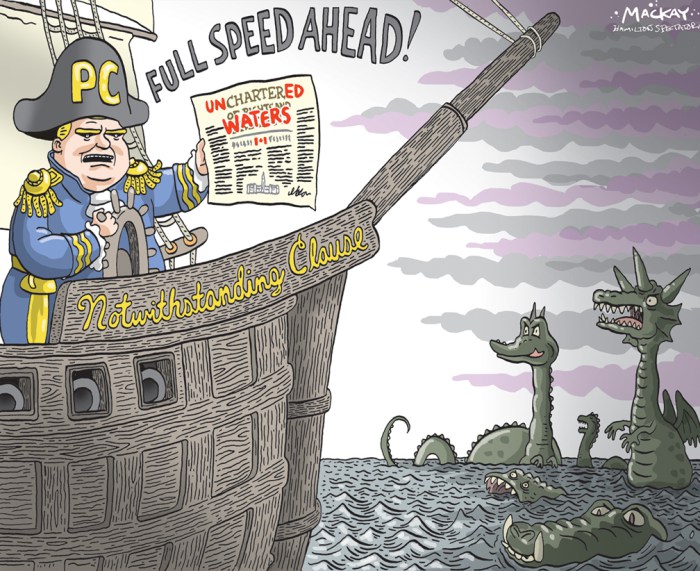 Show of hands: how many of you expected the Ontario government to lose the constitutional challenge of its Bill 5, which aimed to reduce the size of Toronto’s city council?

Exactly. No one – no one who has been paying attention, at least – expected Doug Ford’s government to lose.

Municipalities are creatures of provincial legislatures, as we lawyers like to say. Provinces can do anything they want to municipalities – even legislate them out of existence.

But Ford lost. In a scathing decision, Justice Edward Belobaba concluded that the newly-minted Ontario government had violated the Charter of Rights and Freedoms with their bill. Specifically, the free speech rights of those seeking a seat on city council.

So, chagrined and chastened, Ford and his government decided to invoke section 33 of the Constitution to override Belobaba’s decision. The non abstante provision. The notwithstanding clause.

What does it all mean? Nothing. It means we are precisely at the point we all expected to be at: with a smaller city council here in the centre of the universe.

The only difference, in fact, is this: Doug Ford decided to avail himself of the notwithstanding clause, something the Constitution explicitly permits him to do.

Section 33 was not conjured up by a Québec separatist, either. It was mostly the invention of Alberta PC cabinet minister Merv Leitch. He suggested it to Alberta Premier Peter Lougheed, who in turn suggested it to Pierre Trudeau, Jean Chretien, Roy McMurtry and Roy Romanov.

None of them liked it. But they all went along with it. Tories, Grits, Dippers. Everyone was in on it.

So, now we are all where we expected to be: with a Toronto city council that is smaller – and which needed to smaller, in my opinion. The only difference is that a little-used part of the Constitution has been once again used. That’s the honest truth.

And, let’s be honest about something else, too. Not many folks can spell “notwithstanding clause,” let alone feign interest in it. To most normal folks, it is just another case of politicians being preoccupied only with themselves.

And that, to me, is Doug Ford’s biggest problem. Not that he overturned a court decision everyone expected him to win. Not that he used a constitutional provision no one knows about. Not any of that.

No, Doug Ford’s big problem is this: he has done the thing that Canadian voters most dislike – he has put the Constitution back on the agenda. He has sent the constitutional cottage industry into overdrive. He has gotten us talking about the thing that most often divide us. That brings out the worst in us.

Trust me, here. I was privileged and honoured to work for the greatest politician this country has ever seen, Jean Chretien. He didn’t lose a single election in 40 years. He did that, mainly, by saying this: “Vote for me, and we won’t talk about the Constitution.”

Whenever the Constitution would be raised by some politician seeking more power, Chretien would be dispatched to wrestle it back into its cage, like a lion tamer. Canadians loved him for it. (I sure did.)

Doug Ford’s mistake wasn’t even invoking section 33, really. Not even that.

No, his mistake was in rousing the Canadian constitutional beast. The beast is now awake, and it is out of its cage, and it is going to start consuming everything in sight. As it always does.

Hands up, anybody who thinks it was a good idea to start talking about the Constitution again.