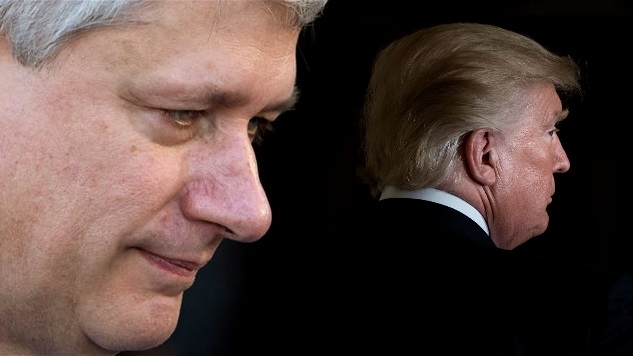 Column: Stephen Harper thinks he can manage the likes of Donald Trump. He can’t.

Can Donald Trump be managed? Can so-called “populists” be persuaded to moderate their so-called populism?

Anyone who has paid the slightest attention to politics, in the past two years, knows the answer. The answer is no.

But the optimists – mainly traditional conservatives, like former Prime Minister Stephen Harper – stubbornly persist in a decidedly Pollyanna-ish outlook. Against all available evidence, they continue to believe that the derangement that is Trump-style populism can be wrestled to the ground.

Uncharacteristically, the new Harper is a sunny, cheerful Harper, all pigtails and puppy dogs. In his new book, Right Here, Right Now: Politics and Leadership in the Age of Disruption, Harper acknowledges that Trump’s rise has been both “disruptive” and “dysfunctional.” But, bizarrely, Harper then goes on to call Trump’s dysfunctionality “benign and constructive,” which is nuttier than Trump is.

Here’s a snippet from Harper’s book that has been excerpted in the Globe and Mail:

“From Brexit to Donald Trump and the “populist” parties of Europe, [the populists’] success has hit establishment institutions with successive surprises that are provoking reactions leading from confusion to alarm and to outrage… If [traditional] policy does not seem to be working out for the public, in a democracy, you are supposed to fix the policy, not denounce the public.

But, if you listen to some leaders and much of the media, you would not know it. Their response is wrong, frustrating and dangerous. Wrong, because most of today’s political upheaval has readily identifiable causes. Frustrating, because it stands in the way of credible, pragmatic solutions that do exist. Dangerous, because the current populist upheaval is actually benign and constructive compared with what will follow if it is not addressed.”

Donald Trump is “benign and constructive?” Seriously? The only rational explanation, here, is that the straight-laced former Conservative Prime Minister indulged in the Liberal Party’s cannabis policy that he once denounced. Proffer policy, says Harper, and we will mollify and manage Trump’s lunatics legions.

That, to put it charitably, is highly naïve. You don’t offer sugar cubes to a rampaging bull, folks: you kill it.

Harper’s mistake, however, is not his alone.

The punditocracy and the commentariat made (and still make) the same critical error. They said Trump and Brexit couldn’t win, but they won. They said Trump and Brexit couldn’t do it, but they did it. Donald Trump – the bilious, buffoonish billionaire – is the President of the United States. It really happened, Mr. Harper. You’re not dreaming. And no amount of thoughtful “policy” will now offset that.

Donald Trump, having become famous on TV, knew one thing above all else: the political brain is all emotion. Logic and policy, if it plays any role at all in politics in this Century, play only a supporting one. Trump has therefore always known that if he talks like a regular guy, regular guys like will hear him, and they’ll support him, too.

Similarly, Trump and the Brexiteers know that most people – most normal people, anyway – pay little or no attention to politics. They’re Joe and Jane Frontporch, and they’re busy. They don’t have time for voluminous political party platforms, or sitting through political speeches, or reading campaign press releases. In the digital era, to wit, they’re overwhelmed by too much information, so they just tune it all out. That’s why the guy who attracts the most attention is Donald Trump (or those like him).

Guys (because they are mainly guys) like Trump and the Brexiteers are so outrageous, so brash, so loud, they break through the noise, and capture Joe and Jane’s attention, and dominate every media cycle. Harper’s book notwithstanding, that is why plain-talking Trump captured the White House, and why Hillary Clinton didn’t.

Here’s the reality: Donald Trump didn’t happen despite the traditions of the Republican Party – he happened because of the traditions of the Republican Party. Specifically, its recent traditions – and its willingness to hand over the keys to the car to the Tea Party types a decade or so ago, who promptly piloted the proverbial car into the proverbial ditch. The Harper, Romney and Bush types speak for the people who formerly ran their respective parties – while Trump speaks for the people who lack money and corner offices, but who presently run the show.

The progressive side of the continuum have always dismissed guys like Trump as red-necked, mouth-breathing knuckle-draggers. But now traditional conservatives like Stephen Harper are doing it, too.

That’s a big mistake that helps Trump, the Brexiteers and the conservative populists like them: it plays into their strategy, because it suggests the critics of Trump/Brexit/populism are snobby, latte-sipping elitists who profess kinship with ordinary folks – but who wouldn’t want to actually live next door to any ordinary folks.

Destroy the populists. Wipe them out. A polite chit-chat, a la Stephen Harper, will only get you more of the very exile from which you are presently attempting to escape.