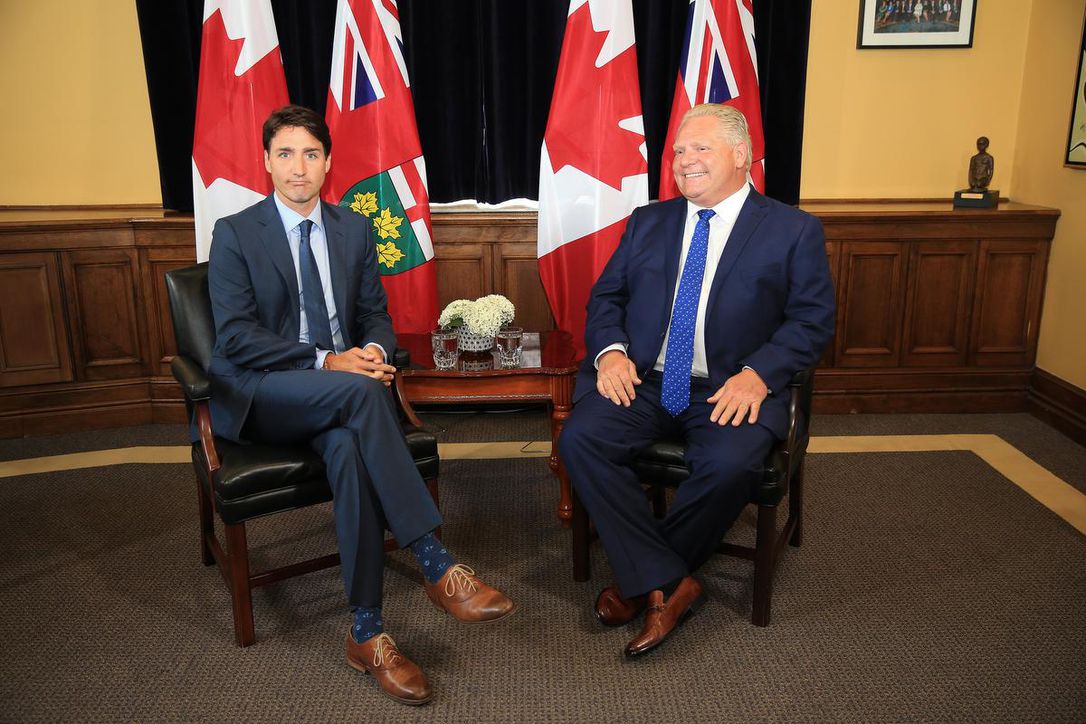 Doug Ford and Justin Trudeau hate each other’s guts. And that makes sense. 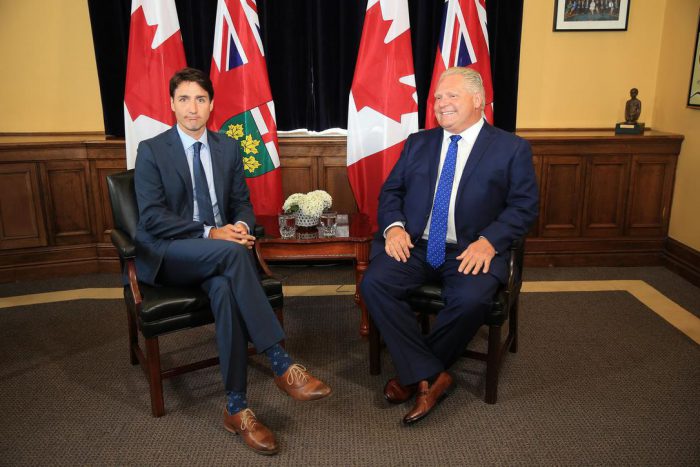 That’s what newspaper editors always write when publishing a photo of a couple who have (a) just announced their divorce, (b) expressed their profound sadness, and (c) requested privacy for their family. “In happier times.”

Justin and Doug briefly had a happier time together, too, although it seems to have happened long, long ago, in a galaxy far, far away. But it happened, just the same.

June 2018: Donald Trump, the sexual predator and crook now holding the White House hostage, unleashed a tirade against Canada’s Prime Minister on Twitter (where else?). Trump called Justin Trudeau “dishonest and weak” and one of his advisors – who of the few who hasn’t been indicted yet – opined that there was “a special place in Hell” reserved for Trudeau.

It was an astonishing attack on an ally, one that Canadians have never witnessed before. Trudeau, for his part, bit his tongue and said nothing. But Doug Ford? The Doug Ford who had won a massive majority government, just a few days earlier? That Doug Ford?

Here’s what he said: “I can tell you on the trade deal south of the border, we stand shoulder to shoulder with the prime minister and our federal counterparts. My number one priority is to protect jobs in Ontario, especially protect the steel workers, aluminum workers. That’s going to be a priority.”

This writer is not friendly with Trudeau, but is with Ford. So I sent Ontario’s newly-minted Premier a note, telling him I was proud that he had placed the national interest above the partisan one. Lots of other folks, as Ford loves to call citizens, felt likewise. Even if you didn’t like Justin Trudeau all that much, he – and, by extension, we – were under attack, and we needed to come together.

And then, well, politics.

In the intervening months, Justin Trudeau and Doug Ford haven’t stood “shoulder to shoulder” so much. Instead, it’s been more a case of a relationship that’s getting “colder and colder.” Here’s a short list of the sort of thing that has taken place since the happier, sunnier ways of Spring:

And war it is. Just a few months in, and the Ford and Trudeau governments – from top to bottom – deeply despise each other. Their enmity and animosity seems to only grow worse by the day.

Neither government will admit to a secret, however: they may hate each other, but they need each other.

Since the departure of Saskatchewan’s Brad Wall from the national stage, Justin Trudeau has lacked a serious, capable conservative opposite. Walls’ successor couldn’t be picked out of a one-man police lineup by most Canadians, and Brian Pallister is too busy running a villa in Costa Rica. Quebec’s Francois Legault is too new to the job, and knows that Trudeau remains somewhat popular in Quebec. Out in Alberta, meanwhile, Jason Kenney isn’t Premier yet.

So the job of Conservative antagonist has fallen to Doug Ford.

And his partisans love his sallies and broadsides against Justin Trudeau. They love it. While Ford’s most-recent party convention was scuttled, somewhat, by SoCon knuckle-draggers passing a non-binding resolution attacking trans people, most PC attendees delighted in Ford’s ceaseless critiques of Justin Trudeau’s government. They ate it up. Andrew Scheer even showed up to join in on the fun.

Similarly, the Trudeau Party is covertly grateful for Doug Ford: he is (and will be) useful in Liberal fundraising, recruitment and electioneering. And Trudeau’s disdain for Ford is deep, and of longstanding. The Ontario Premier has never forgotten this attack by Trudeau on Ford and his deceased brother, made as the 2015 federal election was winding down:

“There’s a lot of people talking in the news these days about the hypocrisy of the Fords and their drug problems. But that’s not really the issue, as serious as it is, that strikes me most. What bothers me the most is the misogyny. The Ford brothers should have no place on a national campaign stage, much less hosting [Stephen Harper] at an event…That’s just completely irresponsible.”

As low blows go, that was low.

Shoulder to shoulder? No longer, with Messrs. Ford and Trudeau.

These guys hate each other – and, weirdly, need each other.