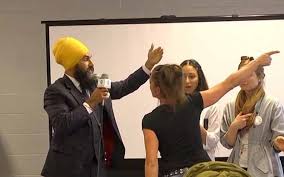 How Jagmeet Singh can be saved from himself

By now, you would have seen the latest Nanos poll thing, showing your New Democrats at a titch under fifteen per cent. ‎By now, too, you have perhaps abandoned the fetal position you have adopted under your desk, which is nowhere near Parliament Hill because, well, you haven’t been elected to a seat in Parliament.

That’s one of your problems. You have many.

The regular Nanos poll, which is an opioid to many Hill folk, suggests the Conservatives are at or around 32 per cent nationally. And the Liberals – who daily give thanks to the gods for making you leader of the federal NDP – ‎are at forty (40) per cent, Jagmeister.

Forty per cent: almost three times as much support ‎as you.

Even worse – and don’t start hiding under that desk again, Jagmeet – Nanos says Justin Trudeau is the favoured choice of Prime Minister ‎by 38 per cent of Canadians.

That means you are tied in the crucial leadership ‎horserace with Green Party leader Elizabeth May (who just got engaged, and best wishes from all of us here at the Hill Times, Liz).

It also means you are presently leading the once-proud New Democratic Party to its worst electoral showing in decades. The last time the NDP dipped below 15 per cent in popular vote was under the leadership, such as it was, of Audrey McLaughlin and Alexa McDonough.

What political challenge did Audrey and Alexa face in 1993, 1997 and 2000, you ask? Well, thank you for asking. They faced my guy, Jean Chretien. Le petit gars wiped the floor with Dippers, when he was leader. Your party only rebounded, and got past 15 per cent again, when Chretien resigned and Paul Martin commenced piloting the Liberal Party into the ditch.

So, how do you beat Justin?

Glad you asked. ‎You have it in your power to reverse your party’s present downward descent into obscurity and, possibly, invisibility.

Number one: bring back the pros. Fire the amateurs in your office.

Brad Lavigne, Kathleen Monk, Karl Belanger, Brian Topp, Anne McGrath: those were among the strategists who lifted your party, and Jack Layton, to previously-unheard-of heights. That was the team who beat the Liberal Party of Canada in 2011 – the party that had previously been the most successful political machine in Western democracy – and consigned it to the ignominy of third place.

There are newer New Democrats, too, who you need to hire, and fast. Like, say, Michal Hay, the genius who leads Progress Toronto, and who was Chief of Staff to the aforementioned Jack Layton when he was a city councillor – and who was the woman who helped you win the NDP leadership. And who, upon winning it, you cruelly and stupidly abandoned. You need Michal back.

Don’t just take my word for it. A recent sounding by Mainstreet Research shows you running third, Jagmeet. That reflects the internal (and usually more accurate) numbers of both the Liberals and the NDP.

The insanity of running somewhere when you know you are going to be eviscerated: that’s bad enough. But it’s rendered even more crazy when there is a perfectly acceptable alternative available, in Brampton.

You know, the neighbourhood which you represented for years in the Ontario Legislature. And which you would easily win.

Look, maybe you’re tired of all this politics stuff, and you are looking for a dramatic and humiliating ‎way to exit public life. That’s possible.

Or, more likely is the possibility that your are stubborn as a mule, and you think losing is principled or something.

It isn’t. It’s losing. And it means the end of your political career, buddy. Lights out.

‎Number three: do what Layton did. Copy him. It made him the much-loved Leader of Her Majesty’s Official Opposition, among other things.

As my wife – a former Michael Ignatieff senior aide – recently reminded me‎: Jack Layton didn’t have a seat in the House for a long time, either. But no one off the Hill knew it. Jack scrummed as often as possible, en les deux langues, and was ubiquitous. You should do likewise, Jagmeister.

Policy-wise, too, you’ve been letting Justin Trudeau steal your leftie lunch money. Take it back.

The Leap Manifesto faction want to see Canadians living in huts, heated by windmill power, and eating stuff squirrels do. They are nut cases. Have nothing to do with them.

Do what Layton did. Do what Rachel Notley has done, too: ‎embrace the progressive centre.

Pledge to push for more doctors and nurses. Push for better pensions. Demand caps on credit card fees. Offer to spend more on post-secondary education, and affordable housing. Say you’ll craft a better tax credit for those who create jobs‎ and who care for their elderly family members.

Insist on lower home-heating costs. Recognize that pipelines are safer, and more environmental, than transporting trainloads of oil through places like Lac Megantic. Do better at helping small business than the Trudeau Party has done (and, as a small business owner, I assure you that won’t be difficult).

All of these things were advocated by the Layton/Notley tribe, over the objections of the Lewis/Laxer gang. And guess who clobbered Liberals in subsequent elections, Jagmeet?

You have it in you, young man, to do better. Way, way better. But only if you (a) bring back strategists who know strategy (b) run in that Brampton by-election and (c) ‎start crafting policies that are, you know, both progressive and popular.

Can you do it? Sure you can.

Will you do it?

I have my doubts.