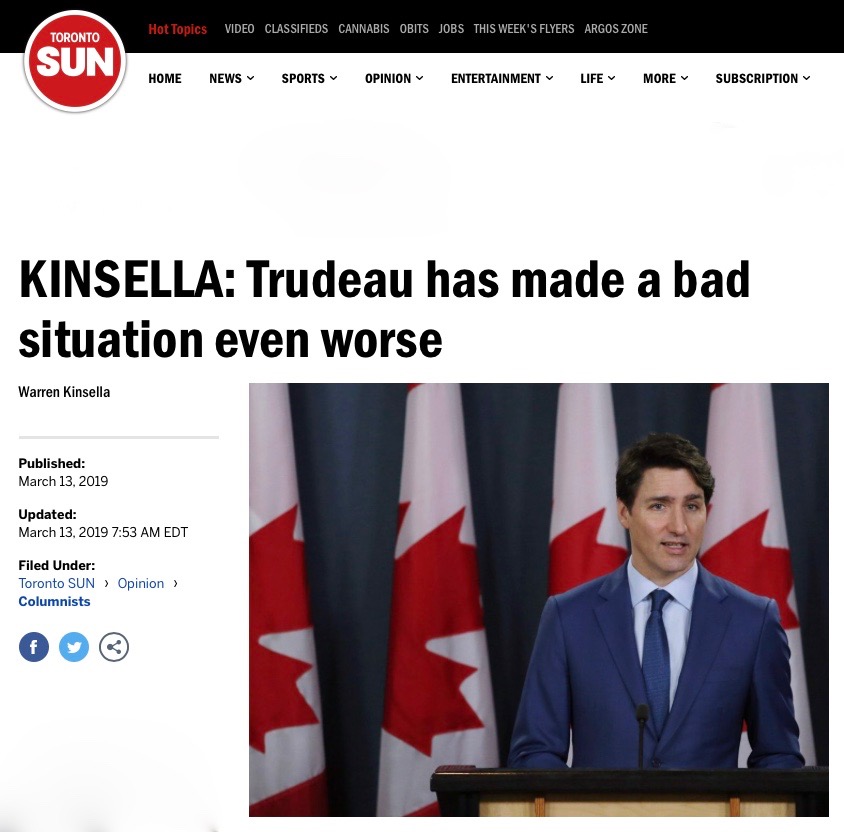 It was vintage Justin Trudeau.

There he stood at the prime ministerial podium at the National Press Theatre in Ottawa, a battery of Canadian flags behind him, a throng of journalists in front of him. He blinked, all dewy-eyed sincerity.

It was Thursday morning, early. He’d just been asked if he planned to apologize for the metastasizing Lavscam scandal. It wasn’t a crazy question: Trudeau’s own press minions had been leaking that the prime minister was considering doing precisely that.

But, no. Said Trudeau: “I will be making an Inuit apology later today,” he said. Blink, blink.

And so it went. Not the worst press encounter of the week — R. Kelly won that prize, hands down — but close. Made a bad situation way, way worse.

For starters, as noted, the Liberal leader didn’t apologize — for what he had done to Jody Wilson-Raybould. For trying to cook up a sweetheart deal for a rotten Quebec engineering firm. For wiping his feet on the rule of law.

Apologies cost nothing, Justin. If done right, they pay lots of dividends.

That’s not all: The Deflector-in-Chief didn’t take responsibility. Not even a bit.

Even if you don’t apologize, Justin — even if you don’t express the smallest amount of regret, which you didn’t do either — it’s important that you accept that the proverbial buck stops with you. Instead, you whinged (yet again) that it’s all Wilson-Raybould’s fault.

“She didn’t come to me,” you wheezed. (Actually, she did. You just wouldn’t listen.)

The worst of it: Trudeau sounded as sincere as a two-bit carnival barker.

That’s a surprise. Trudeau’s greatest talent, you see, is acting. He is an expert at radiating sincerity and emotion. But at his press conference, he had all the conviction of an al-Qaida hostage reading a statement about the evils of the West. This was a historic moment, and Trudeau needed to convince us. He didn’t.

He didn’t acknowledge the seriousness of this scandal, either. Lavscam is a raging five-alarm fire; Trudeau brought a squirt gun. He said nothing that will extinguish Canadians’ growing belief that Trudeau and his staff may have obstructed justice.

Also: Trudeau didn’t rebut the allegations that have been made against him. In fact, he did the reverse. He confirmed all of Wilson-Raybould’s evidence: That she was pressured to give SNC-Lavalin a judicial high-five. That he and his officials — 11 of them, more than 20 times, over a four-month period in fall 2018 — did what the former attorney general said they did. Guilty as charged, Your Honour.

At one point, Trudeau looked up from his focus-grouped talking points. He looked a bit weepy. Was an apology about to arrive?

Instead, Trudeau gave us every indication that the pressure is getting to him. Without warning, he launched into a bizarre exposition about his dead father. How he and Pierre liked justice. And stuff.

And so it went. Trudeau just didn’t get how bad this is. You know: That, in a functioning democracy, politicians cannot ever, ever tell judges and prosecutors what to do. When that happens enough, you are a democracy no more. You’re a banana republic.

As he departed to “make an Inuit apology,” he was right about one thing, however. An “erosion of trust” had happened, as he said.

But the “erosion of trust” wasn’t between him and Wilson-Raybould.

It’s between him and us.