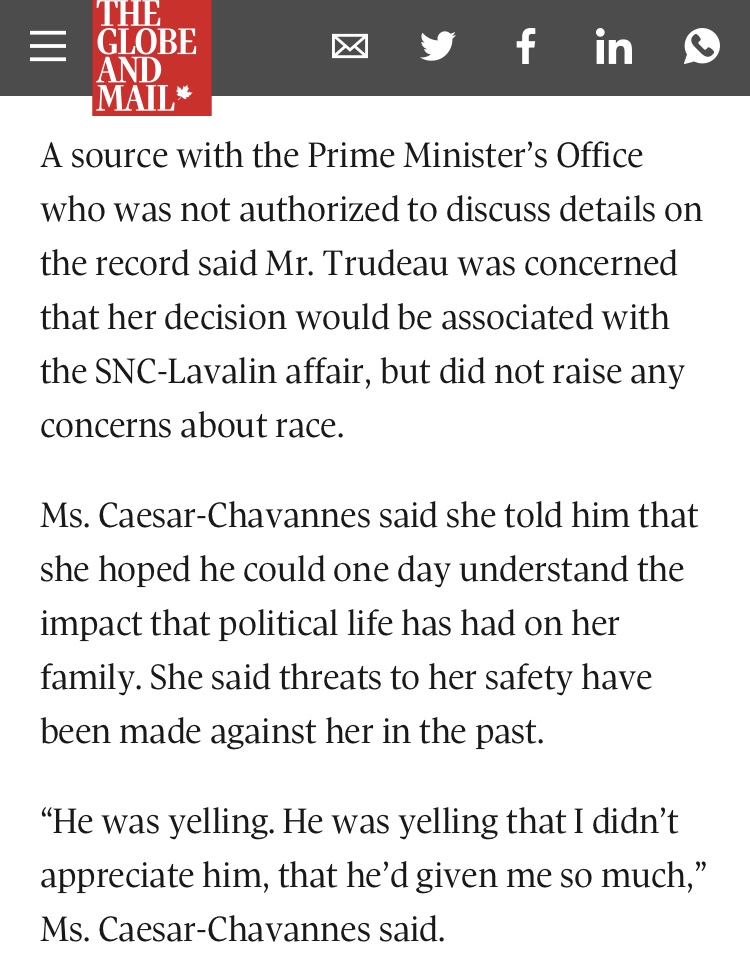 “[Trudeau] was yelling. He was yelling that I didn’t appreciate him, that he’s given me so much.”

The Globe and Mail just broke this incredible story. And, on International Women’s Day – on any day – it’s not a good look for the self-professed “feminist.”

I guess he could again say that we should believe women when they come forward. And then he could dismiss them. Again.

Liberal MP Celina Caesar-Chavannes says she was met with hostility and anger from Justin Trudeau when she told him she was leaving politics, prompting her to speak out about the Prime Minister’s behaviour.

A source with the Prime Minister’s Office who was not authorized to discuss details on the record said Mr. Trudeau was concerned that her decision would be associated with the SNC-Lavalin affair, but did not raise any concerns about race.

Ms. Caesar-Chavannes said she told him that she hoped he could one day understand the impact that political life has had on her family. She said threats to her safety have been made against her in the past.

“He was yelling. He was yelling that I didn’t appreciate him, that he’d given me so much,” Ms. Caesar-Chavannes said.

A week later after a caucus meeting, Ms. Caesar-Chavannes said she approached Mr. Trudeau to talk about their last interaction.

“I went to him, I said, ‘Look I know our last conversation wasn’t the greatest but …’ And at that point I stopped talking because I realized he was angry,” she said.

“Again, I was met with hostility. This stare-down … then him stomping out of the room without a word.”