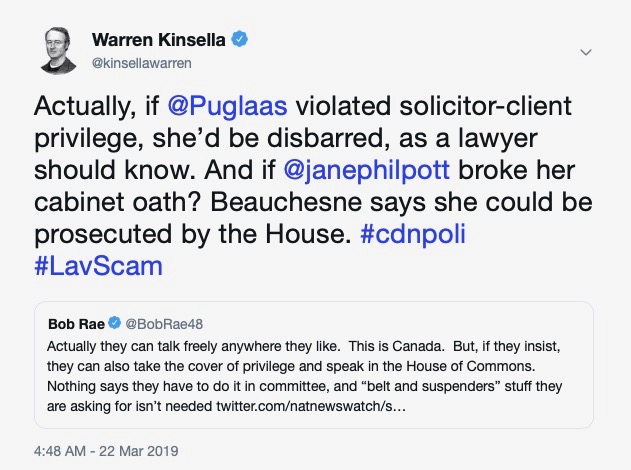 Hate to sound like a guy who teaches at a law school and all that, but I am and I do.  And so, Judy Sgro, John McKay, Susan Delacourt and Trudeau patronage recipient Bob Rae et al.: stay in your lane, please.  Violating a cabinet oath is a serious offence.  Violating solicitor-client privilege will get a lawyer disbarred, too.

Get with it, folks.  Jody Wilson-Raybould and Jane Philpott have both said they want to talk, and they have things to say.

What’d happen, ⁦@SusanDelacourt⁩, if ⁦@Puglaas⁩ violated solicitor-client privilege? She’d be disbarred, that’s what. And if ⁦@janephilpott⁩ broke her cabinet oath? Beauchesne says she could be prosecuted by the House. #cdnpoli #LavScam https://t.co/505MLoqY1U

It’s revealing, but not surprising, that the political party that cooked up #LavScam is urging two principled women to break their oaths – which will result in disbarment/prosecution if they do so. A basic understanding of law and ethics isn’t a Trudeau PMO strength. #cdnpoli

From the bulging Political Irony file: if @Puglaas and @janephilpott violate cabinet confidences, as PMO's supplicant's are urging them to do, they could be charged with Breach of Trust – as, um, Vice-Admiral Norman has been. By PMO's supplicants. #cdnpoli #LavScam