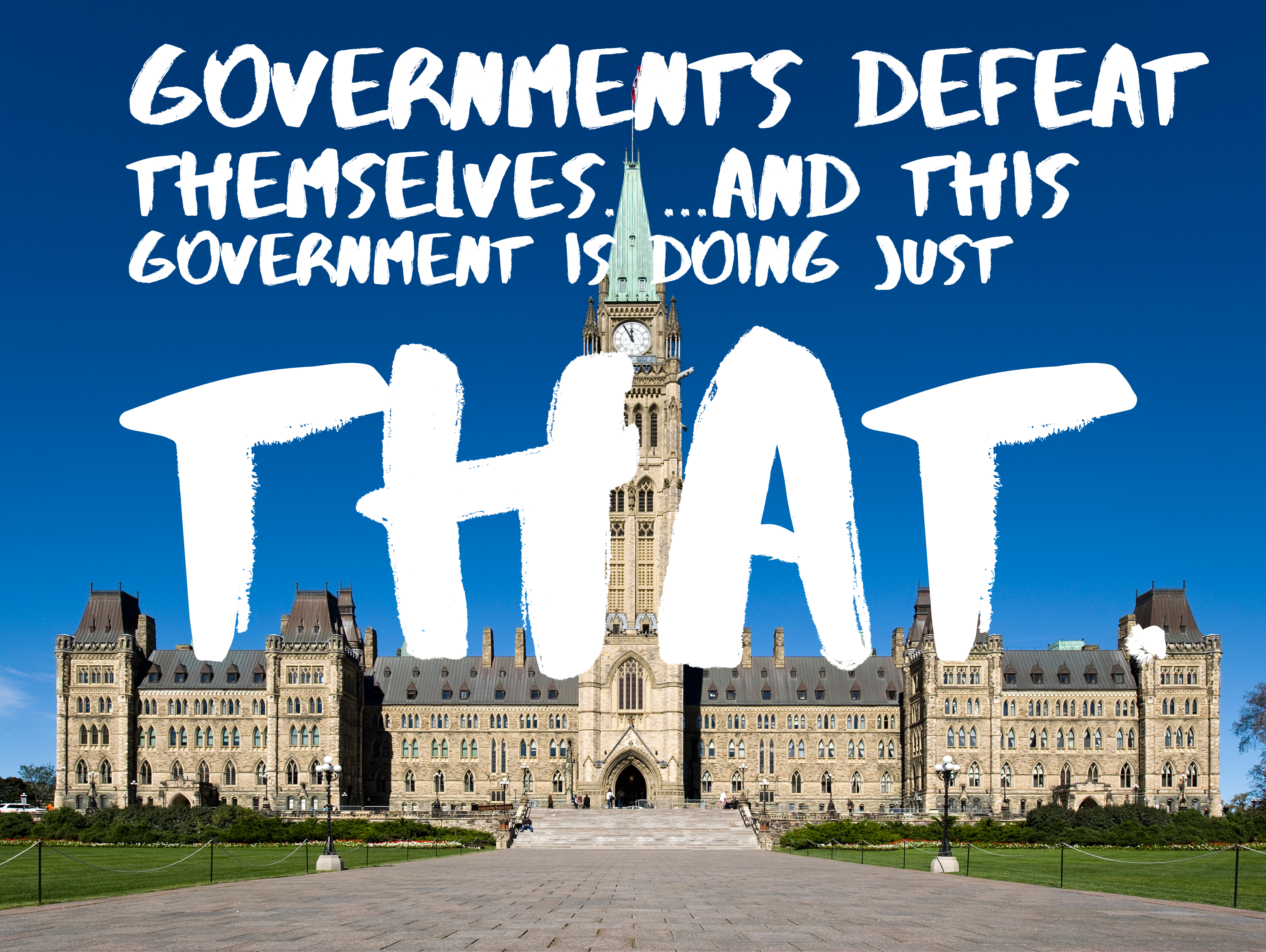 The Liberal majority on the “Justice” Committee again voted to prevent Jody Wilson-Raybould from speaking.

It didn’t go over well. None of it has gone over well.

•Toronto Sun Campaign Research poll: “As for Trudeau himself, Yufest says he now stands at just 29% approval compared to 58% who think the PM is doing a bad job. Those numbers says Yufest are close to the unpopularity of former Ontario Premier Kathleen Wynne who dropped into the 20s and was never able to recover. While just 29% approve of Trudeau’s job performance, 45% approve of the job done by former attorney general Jody Wilson-Raybould. “The people are with her on this issue specifically and not so much with Justin Trudeau,” Yufest said.

•Campbell Clark, Globe and Mail: “Too bad for their party that [Trudeau Liberals] can’t figure out how to rip the Band-Aid off as quickly on the larger SNC-Lavalin affair. Instead, they are fuelling the most potent narrative still giving legs to the story – the idea that they are blocking Ms. Wilson-Raybould, the former justice minister and attorney-general, from revealing something important about the SNC-Lavalin affair…The Liberals say they prefer to discuss such things behind closed doors.But in this case, that’s a crock. This was a simple motion in the most closely watched parliamentary hearings in the country. It was a simple yes or no question. The Liberal MPs voted to adjourn the committee meeting without having it go anywhere. At best, that’s stalling. At worst, it’s obstructionism.”

•Lawrence Martin, Globe: “Let’s reject Gerald Butts’s claim in his committee testimony that the Prime Minister’s Office did not pressure Jody Wilson-Raybould on the SNC-Lavalin case. Let’s reject his view that her cabinet demotion had nothing to do with her unwillingness to co-operate on the file. Instead, let’s accept Ms. Wilson-Raybould’s version of events and conclude that she showed courage, not spite; that she stood for high principle, and performed a noble public service….But on the matter of loyalty, a woman from the Indigenous community presents a new dynamic. How different is the loyalty concept to a community betrayed so often through the country’s history? It’s been a community that has stood apart, has been made to feel apart and is apart. That Ms. Wilson-Raybould reacted the way she did should not have come as a surprise to Mr. Trudeau. Her people, with good reason, were never really part of the team. As the Prime Minister is ruefully finding out, they still aren’t.”

•Campbell Clark, Globe: “This seems like a pretty self-destructive thing for Liberal MPs to do. It adds fuel to the story, and the same question – whether they will let Ms. Wilson-Raybould come back to the committee to testify again – will come up again next Tuesday. Those Canadians who figured they already knew pretty much what happened in this affair are being invited to ask questions again.”

•Konrad Yakabuski, Globe: “The brutality of Libyan dictator Moammar Gadhafi’s regime has been cited by some legal experts as a possible explanation for why Director of Public Prosecutions Kathleen Roussel refused to negotiate a deferred prosecution agreement (DPA) with SNC-Lavalin. The law forbids Ms. Roussel from entering into such an agreement if she believes a company’s alleged crimes might have caused serious bodily harm or death….SNC-Lavalin had been operating in Libya since the mid-1990s. But its business there took off after [Paul] Martin’s trip. In a 2006 Globe and Mail interview, then-SNC-Lavalin CEO Jacques Lamarre insisted the company was helping to elevate business practices in Libya: “We like win-win situations. We’ve been involved in international markets for over 40 years and have helped many countries to become normal.” By 2011, as Mr. Gadhafi moved to suppress Arab Spring protests in his country, it had become clear the dictator had never given up on repression. SNC-Lavalin found itself having to publicly defend its $275-million contract to build a state-run prison.”

•John Ibbitson, Globe: “[The LavScam] affair damaged as well Mr. Trudeau’s reputation abroad. News organizations around the world have reported on the controversy, with “charismatic Trudeau tarnished by scandal” a common refrain. And this week’s statement by the Organization for Economic Co-operation and Development was devastating. “The OECD Working Group on Bribery is concerned by recent allegations of interference in the prosecution of SNC-Lavalin,” the statement read, adding that, under the terms of the OECD Anti-Bribery Convention that Canada belongs to, “political factors such as a country’s national economic interest and the identity of the alleged perpetrators must not influence foreign bribery investigations and prosecutions.” To anyone who has been arguing that this controversy was manufactured by febrile media feeding off the actions of misguided or disloyal MPs: The OECD disagrees.”

• Andrew Coyne, National Post, on Twitter: Holy freaking hell. I thought the Libs would try to shut things down, but I didn’t think they’d do so quite so crudely and obviously.”

• Susan Delacourt, Toronto Star, on Twitter: “I was more optimistic about openness than Andrew, so I think I’m more stunned. What the freaking hell indeed….Did the Liberals really shut down the #JUST committee and the motion to recall Jody Wilson-Raybould? Whoa. I’m speechless.”

• Toronto Star editorial board: “Liberals on the House of Commons justice committee are doing Canadians, and their own government, no favours by failing to clear the way for Jody Wilson-Raybould to tell her full story. She wants to speak out and there’s no doubt she should be heard. Trying to prevent that, or even just delaying it in the hope that everyone will lose interest, is both wrong and self-defeating.”

• Christie Blatchford, National Post: “On Wednesday, Liberal MP Francis Drouin took non-Liberal members of the committee by surprise — the opposition had called the emergency session to discuss getting deposed attorney-general Jody Wilson-Raybould back as a witness and MPs had just started making arguments — when he abruptly moved to adjourn the meeting and the sheep duly followed. To opposition shouts of “This is disgusting!” and “Coverup!”, the Liberal members bravely slipped out back doors. PM Justin Trudeau himself was either in Florida, or heading back to Florida, or heading home again from Florida: For a while there, he was in and out like a sailor on shore leave. He appears to treat that state like he treats question period: It’s there for his convenience.”

• Andrew Coyne, Post: “The irony is suffocating. Concentration of power is very much at the root of this scandal: the assumption of the prime minister and his lieutenants that they were entitled, not only to lean on the former attorney general to decide on a criminal prosecution to their liking, but allegedly to reach down deep into her department. And yet the same concentration of power makes it all but impossible to get to the bottom of it. The public is very much in the same position as Wilson-Raybould: told of her complaints of having been improperly pressured by the prime minister, among others, the prime minister replied that she should have brought her concerns to the prime minister. (She did, of course, but nevever mind.)

• Anthony Furey, Sun: “It was always obvious from the get go that the Justice Committee wasn’t going to be the place where we really got to the bottom of Lavscam. Yes, it’s where the plot first thickened as Jody Wilson-Raybould gave her damning testimony. Yes, it’s where Gerald Butts and Michael Wernick offered their troubling rebuttals. But it looks like that’s all folks. The door has slammed shut, courtesy of the Liberal MPs on the Committee…Back to that reason why we should have known all along this process was bad news: Because it was Prime Minister Justin Trudeau’s preferred option. He kept telling us trust the committee, to have faith in it. No wonder. Now it’s doing his bidding.”

• Robyn Urback, CBC: “You have to listen to the [Chrystia Freeland] interview to appreciate the full effect, but suffice to say, it was the sort of sycophantic performance characteristic of — and perfected in — the early days of #TeamTrudeau. Freeland didn’t just pledge her allegiance to the prime minister (which, granted, you sort of have to do as a cabinet member), she actually extolled his handling of the affair — as if the conflicting messages, sloppy smear jobs and clumsy attempts at obfuscation never happened. Freeland was gushing over a plate of bones, trying to convince us they still looked tasty. Contrast that with the statement released by Philpott on Monday, when she announced her resignation as president of the Treasury Board and exit from cabinet. Philpott said she had “lost confidence in how the government has dealt with this matter and in how it has responded to the issues raised.” Citing the need for cabinet solidarity, she said it would be “untenable” for her to continue to serve as a minister…A million more Freeland-type ovations can’t undo what Philpott did in a few hundred words: she told the doe-eyed #TeamTrudeau hangers-on that their faith in this government is misplaced. And she said she would not be able to fulfil her duties as a minister if it meant publicly defending the government.