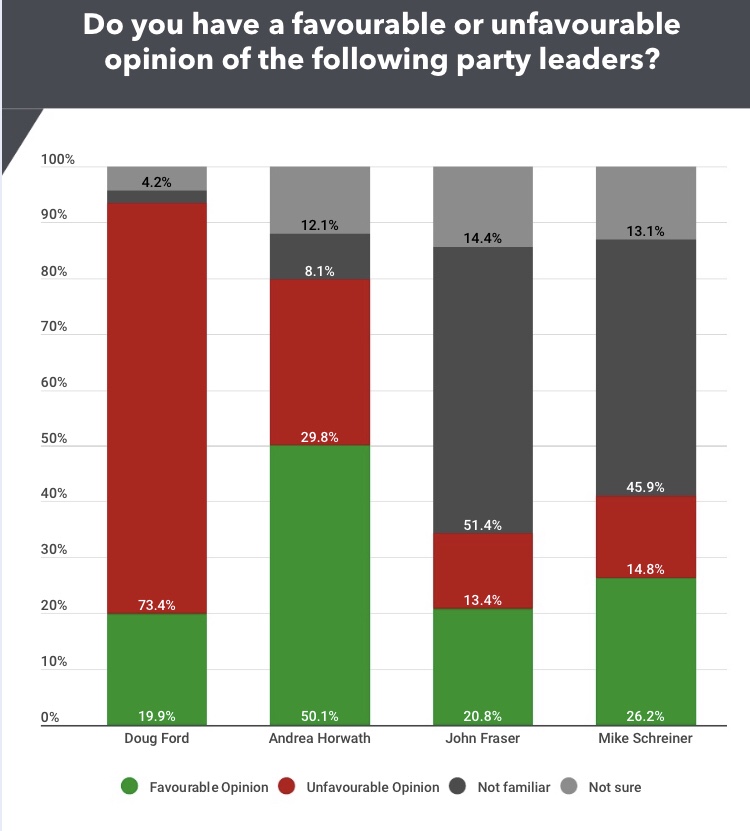 So, that Mainstreet poll.

On the one hand, I like its founder and the people who work there. My firm has used them in the past.

When the Lavscam scandal broke, however, Mainstreet’s boss took it upon himself to – for lack of a better word – troll each and every opinion I offered on the scandal. In particular, he repeatedly asserted that Lavscam would have little to no effect on Liberal fortunes.

By now, of course, we all know that that is simply not true. Lavscam precipitated a dramatic decline in Liberal support, and the Trudeau Grits have not really recovered.

On the other hand, however, I think we need to take Mainstreet’s latest poll somewhat seriously. It is consistent with a commissioned poll done by Environics, and an earlier poll done by Don Guy’s Pollara, and one that speculated about the effect of a John Tory-led Ontario Liberal party.

But most of all, it reflects what my gut has been telling me for some time – that the Ford folks need to get back the narrative that got them elected nearly a year ago.

It’s a debate that I had with Jerry Agar on Newstalk 1010 early Wednesday morning. There’s no doubt, I said, that Kathleen Wynne’s regime spent recklessly in the final half of its mandate. Equally, there is no doubt that Ford was elected with a clear mandate to cut back on same.

The problem, I told Jerry, is that the cuts lack a coherent underlying story. I reminded him that my boss Jean Chretien oversaw the largest program of government restraint in Canadian history, way back in 1994 and 1995. Chretien pulled that off, and then some. And he was subsequently reelected with a majority.

Ontarians understand that there is a need for cuts. What they clearly don’t understand is why the Ford government is doing them. People are prepared to accept lots of belt-tightening – but you need to be able to tell them why, in 30 words or less.

It’s not too late for the Ford folks to find that short, sharp narrative.

But they need to do so soon, or they may end up being exiled on Mainstreet.