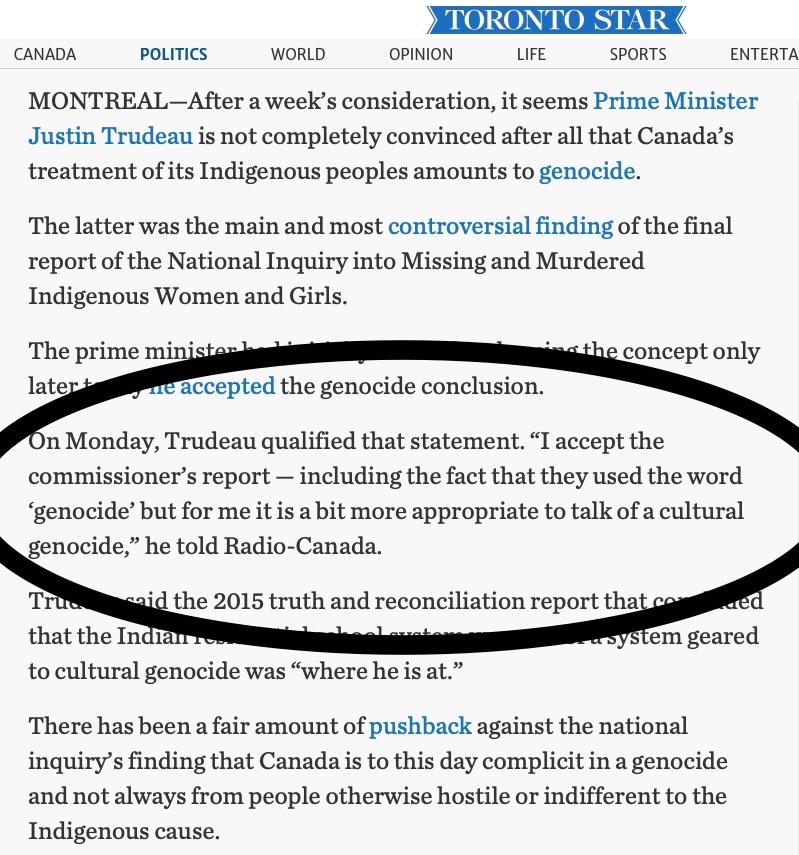 My latest: it isn’t genocide

Genocide is one of those words that one does not toss about, like confetti. One does not treat “genocide” like it has no meaning.

It has a very specific meaning.

Justin Trudeau knows it is a serious word, because of what he has said in the recent past. He knows that the word “genocide” describes the most serious crime there is: murder on a massive scale, by a state power, targeting citizens because of their religion or race or ethnicity.

So, in the House of Commons in September 2016, as Prime Minister, Trudeau said: “This government recognizes that acknowledging genocide should be done on the basis of extraordinary facts and wise counsel internationally, not just on political grandstanding by members like the member opposite.”

That’s what he said. Earlier, in June of that year, the Liberal Prime Minister said this: “Mr. Speaker, we feel that determinations of genocide need to be done by objective measures and through proper research on the international stage. We will not trivialize the importance of the word ‘genocide’ by not respecting formal engagements around that word.”

In the same month, Trudeau also said that his government “understand[s] how important it is not to trivialize the word ‘genocide’ and to give it the international legal weight it deserves. That is why we are asking the international community to examine the facts and make an objective determination. We do not want to play petty politics with this issue and these atrocities. Canadians expect better than that from this government.”

And, again in June 2016, when the Conservatives were hounding him about the Islamic State and genocide: “We do not feel that politicians should be weighing in on this first and foremost. Determinations of genocide need to be made in an objective, responsible way.”

And so on, and so on. You get the point. He knows what genocide means. He knows that it is a word that must be used with great, great care.

Last week, Justin Trudeau said that Canada, and Canadians – and every government that preceded his – had committed genocide against Indigenous people. Specifically, the thousands of women and girls whose murders were documented, and lamented, by a National Inquiry he himself created.

Were we – as a people, as a nation – indifferent for 150-plus years? Yes. Were we inattentive? Yes. Were we ignorant? Yes. Were some of us racist and cruel and simply evil? Yes, yes and yes. All those things.

But the murder of thousands of Indigenous women and girls was not a state-sanctioned, state-led, state-mandated act of genocide. It was a series of murders, committed by individuals, not the state. Fully deserving of investigation and prosecution, still, because there is no statute of limitations on any murder.

When the National Inquiry’s report was handed to him, Justin Trudeau did not say this: “Was it state-sanctioned genocide? No. But we, as a nation, were negligent. We were wrong. We were to blame. So, today, I’m announcing the creation of a fully-funded national police task force to investigate and prosecute these many murders. We will not rest until we get justice for these women.”

Instead, he spent the morning in Ottawa doing some verbal gymnastics, trying to avoid acknowledging that genocide had taken place. By the time he got to Vancouver, however, he had reversed himself. “It was genocide,” he said at a conference, to some applause.

The international community – the one which Canada belongs to, and which we regularly give pious lectures about things like genocide and crimes against humanity – immediately took note. Within a matter of hours, the Secretary-General of the Organization of American States had formally written to one of Justin Trudeau’s government, demanding its compliance in an investigation of acts of genocide committed by Canada against Indigenous people.

Justin Trudeau, at that moment, had made history: he will be the first Canadian Prime Minister to be investigated for genocide during an election campaign. It is a bit of history that will not end well, for him.

Justin Trudeau, being an actor before he is anything else, knows the importance of words. He knows the impact they can have on one’s audience. That is why, until last week, he was always careful not to use one word, above all. He knew its power: “genocide.” The crime of crimes.

The power of that word will now be used against him.