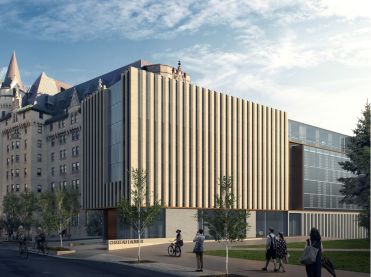 Save the Chateau? Buy it

Several lifetimes ago, when this writer was a Chief of Staff in Jean Chretien’s government – and when the Reform Party was a political force to be reckoned with – stuff started to fall out of the sky.

Well, not the sky, actually. Centre Block’s Peace Tower, to be precise.

Bricks and mortar and other stuff was crumbling and falling onto the ground below. Our bureaucrats had to place some brightly-painted construction hoarding on the ground level, to keep tourists from getting a souvenir they’d never forget. But there was clearly a problem that needed to be addressed.

The bureaucrats, as bureaucrats do, came up with a modernizing solution that would involve the expenditure of several million dollars. Anticipating the reaction of the government-hating Reform Party, I was opposed. The Minister in question, David Dingwall, was in favour. He said something to me I will never forget.

“Warren,” said Dingwall, in that Cape Breton lilt of his, “these buildings do not belong to us. They belong to the people. We are going to do this, and there will be not a peep of protest.”

Dingwall was right, and I was wrong. We went ahead with remediation efforts, and nary a peep was heard from the Reformers, or anyone else.

This tale came to mind, recently, as the Rest of Canada has watched official Ottawa tear itself to shreds over the planned modern addition to the Chateau Laurier. It’s not nice, but this writer has found the sturm und drang rather amusing. It perfectly describes Ottawa, in a way: a bunch of people going apoplectic (a) about change, and about (b) something that doesn’t actually belong to them.

Because, you know, the Chateau Laurier doesn’t belong to the government. Lots of government people spend taxpayer money there, naturally, but they don’t own it.

They sure are acting like they do, however. They don’t want the Chateau Laurier’s owners to make an addition to the hotel that looks different than the way the hotel does now.

Their arguments, in the main, seem to be that the Chateau Laurier looks old, so whatever is attached to it has to look old, too. But is that true?

Well, no. As I type this, I am in Toronto, half a block from the Royal Ontario Museum. It’s an incredible building. Its main structure is more than one hundred years old. On the North side, however, the ROM added an explosion of angular glass and metal, one that aroused a lot of controversy when it was proposed. They added that structure about a decade ago, and the architects call it a deconstructivist crystalline-form structure. It’s beautiful. It has won lots of awards.

If you take a minute and think about it, this sort of thing happens a lot, these days. Architects are coming up with way to fuse modern with traditional right across the country, for both private and public buildings. Among other things, it’s a way of preserving historic buildings while making space for modern buildings which are cleaner, safer and more environmental.

Tradition and modernity aren’t inconsistent. If done right, they’re quite complementary. In a country as old as ours – but in a country that is growing as ours is, by leaps and bounds – it is a way to preserve aspects of the past without being bound to the past. It is a way of embracing modern building methods which are frankly far superior to the ways things were done a Century ago.

Now, if you only like old stuff, you don’t like modern design. Modern design is sleek and clean and avoids fluff. People who like old buildings like fluff. Old buildings are often full of it. The Chateau Laurier has the pretensions of a castle, and with all that implies. It needs to be less pretentious.

The debate raging over the privately-owned Chateau Laurier neatly defines Official Ottawa. It recalls the perpetual 24 Sussex debate. The Prime Minister’s Official Residence is generally regarded as a drafty, windy old barn. No one has been living there for years. But Official Ottawa agonizes about it endlessly, deliberating over whether to tear it down or spend the treasury on it. The opted for the latter.

Ottawa, stop embracing the past. Stop celebrating fluff. Consider the possibilities of 2019 and beyond.

Oh, and this: it’s not your building. If you want to keep it the way it is, buy it.

But use your own money for once, please.