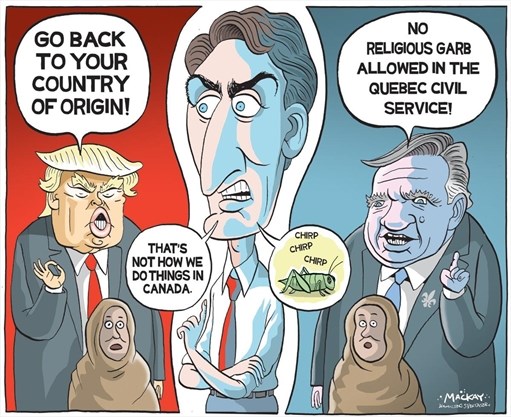 And Canada becomes a little less of a country

And our federal leaders say nothing.  Oh, and our Prime Minister says he’s okay with “values tests.”

Does anyone care about what is happening, here?

Immigrants who want to settle in Quebec will soon be required to pass a values test.

Starting Jan. 1, they will have to prove they have learned “democratic values and Quebec values” in order to obtain a selection certificate, the first step toward permanent residency for those who want to live in the province.

The test was a key election promise made by the Coalition Avenir Québec.

It is still unclear exactly what questions will be asked on the test, but the values are defined as those expressed in Quebec’s Charter of Human Rights and Freedoms.

All adult immigration applicants and their accompanying family members will be required to pass the test if they want to move to Quebec, the government announced in the official Gazette Wednesday.