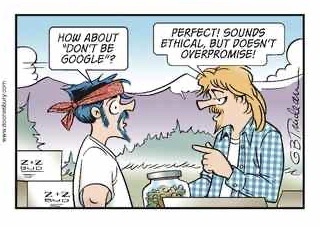 Google’s secret plan to privatize everything – and spy on you

This Globe report, by Josh O’Kane and Tim Cardoso, is just extraordinary.

In essence, the US-based multinational wants to privatize cities and turn them into profit centres. Everything. Along with control over taxation and transit – like they want here in Toronto – Google even wants control over our system of justice, schools and even people’s’ “behaviour.”

This thing reads like a science fiction/horror movie script.

How can anyone at Waterfront Toronto – or Ottawa, or City Hall – continue to treat Google’s ambitions as benign?

They can’t. They shouldn’t.

A confidential Sidewalk Labs document from 2016 lays out the founding vision of the Google-affiliated development company, which included having the power to levy its own property taxes, track and predict people’s movements and control some public services.

The document, which The Globe and Mail has seen, also describes how people living in a Sidewalk community would interact with and have access to the space around them – an experience based, in part, on how much data they’re willing to share, and which could ultimately be used to reward people for “good behaviour.”

Known internally as the “yellow book,”the document was designed as a pitch book for the company, and predates Sidewalk’s relationship and formal agreements with Toronto by more than a year. Peppered with references to Disney theme parks and Buckminster Fuller, it says Sidewalk intended to “overcome cynicism about the future.”

But the 437-page book documents how much private control of city services and city life Alphabet leadership envisioned when they created the company, which could soon be entitled to some of the most valuable underdeveloped real estate in North America.

Since 2017, Sidewalk has been in negotiations with Waterfront Toronto to redevelop a section of the city’s derelict eastern waterfront…

The book proposed a community that could house 100,000 people on a site of up to 1,000 acres, and contains case studies for three potential sites in the United States: Detroit, Mich., Denver, Colo. and Alameda, Calif. It also includes a map with dots detailing many other potential sites for Sidewalk’s first project, including a dot placed on the shores of Lake Athabasca in northern Saskatchewan.

From the beginning, generating real estate value was a key consideration for Sidewalk.

The company presents “enormous potential for value generation in multiple ways,” according to the document: “As a global showcase, as an adaptable testbed for innovation, as a generator of new products, and as perhaps the most ambitious real-estate development project in the world.” It includes profitability estimates for all three sites…

To carry out its vision and planned services, the book states Sidewalk wanted to control its area much like Disney World does in Florida, where in the 1960s it “persuaded the legislature of the need for extraordinary exceptions.” This could include granting Sidewalk taxation powers. “Sidewalk will require tax and financing authority to finance and provide services, including the ability to impose, capture and reinvest property taxes,” the book said. The company would also create and control its own public services, including charter schools, special transit systems and a private road infrastructure.

The book mentions both the data-collection opportunities for police forces (Sidewalk notes it would ask for local policing powers similar to those granted to universities) and the possibility of “an alternative approach to jail,” using data from “root-cause assessment tools” that would guide officials in finding an appropriate response when someone is arrested. The overall criminal justice system and policing of serious crimes and emergencies would be “likely to remain within the purview of the host government’s police department,” however.

Data collection plays a central role throughout the book. Early on, the company notes that a Sidewalk neighbourhood would collect real-time position data “for all entities” – including people. The company would also collect a “historical record of where things have been and vector information about where they are going.” Furthermore, unique data identifiers would be generated for “every person, business or object registered in the district,” helping devices communicate with each other.

There would be a quid pro quo to sharing more data with Sidewalk, however. The document describes a tiered level of services, where people willing to share data can access certain perks and privileges others may not. Sidewalk visitors and residents would be “encouraged to add data about themselves and connect their accounts, either to take advantage of premium services like unlimited wireless connectivity or to make interactions in the district easier,” it says.

Shoshana Zuboff, the Harvard professor emerita whose book The Age of Surveillance Capitalism investigates the way Alphabet and other big-tech companies are reshaping the world, called the document’s revelations “damning.” The community Alphabet sought to build when it launched Sidewalk Labs, she said, was like a “for-profit China” that would “use digital infrastructure to modify and direct social and political behaviour.”

While Sidewalk has since moved away from many of the details in its yellow book, Prof. Zuboff contends that Alphabet tends to “say what needs be said to achieve commercial objectives, while specifically camouflaging their actual corporate strategy.”

According to the document, personalization would increase as users contributed more data, leading to “more complete or personalized services from Project Sidewalk in return.” An example states that people choosing to share “in-home fire safety sensor” data could receive advice on health and safety related to air quality, or provide additional information to first responders in case of an emergency.

The document also describes reputation tools that would lead to a “new currency for community cooperation,” effectively establishing a social credit system. Sidewalk could use these tools to “hold people or businesses accountable” while rewarding good behaviour, such as by rewarding a business’ good customer service with an easier or cheaper renewal process on its licence.

This “accountability system based on personal identity” could also be used to make financial decisions. “A borrower’s stellar record of past consumer behaviour could make a lender, for instance, more likely to back a risky transaction, perhaps with the interest rates influenced by digital reputation ratings,” it says.

The company wrote that it would own many of the sensors it deployed in the community, foreshadowing a battle over data control that has loomed over the Toronto project.