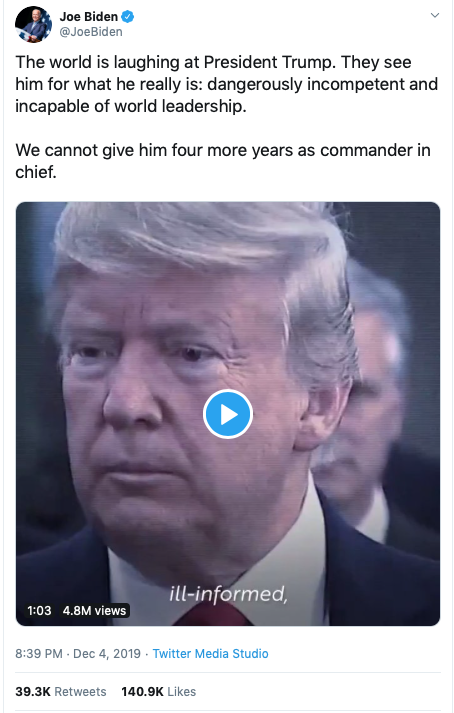 When something becomes A Thing

And the NATO “hot microphone” thing has indeed turned into A Thing.

My regular readers didn’t care what I had to say about it, either: Conservative followers and friends were incensed.  Still smarting from the election result, they pounced on Justin Trudeau’s unguarded remarks.

It was shocking, they claimed, that a world leader wouldn’t know a live microphone and camera were pointed his way – even though Princess Anne, French President Emmanuel Macron, Prime Minister Boris Johnson and Prime Minister Mark Rutte of the Netherlands and even Donald Trump were also caught saying and doing dumb things, on tape, at the same summit. (Trump isn’t new to “hot mic” missteps, of course.)

It was unstatesmanlike for Trudeau to say what he said, they insisted – even though Trump was far more insulting, calling Trudeau names, and leaving the summit early, like the petulant child that he is.

It won’t hurt Trudeau at home – most Canadians detest Trump, and the ones who don’t would never vote for a Trudeau, anyway. But it may hurt us in an impeachment-distracted Washington. Yes, that is true.

Because, 24 hours or so later, it seems that what happened at NATO isn’t going to fade from the collective memory anytime soon, here or in the U.S. It has now turned into A Thing – a thing that may be unhelpful to Canada.  The occupant of the Oval Office is a monkey with a machine gun, you see, and he ain’t gonna be happy about this:

The world is laughing at President Trump. They see him for what he really is: dangerously incompetent and incapable of world leadership.

We cannot give him four more years as commander in chief. pic.twitter.com/IR8K2k54YQ

Sigh. It’s a good ad. Which is probably bad news.

I, again, don’t blame Trudeau for the hot mic – that’s the fault of the Brits, and some political staff who weren’t on the ball. Nor do I blame him for what he said – I have been present when Canadian Prime Ministers talk with other world leaders, and I can assure you it can get pretty nasty, and even pretty ribald, pretty fast.

But there’s no doubt this thing is now A Thing.