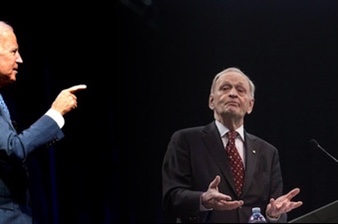 My latest: keep underestimating them. See what happens next.

The familiar voice at the other end of the line laughed, a bit.

“They’re making fun of the way I look and sound, again,” he says, sounding not at all upset.  “I love it when they underestimate me.”

The voice belonged to the Right Honourable Jean Chretien, naturally, and the call had come in early Fall of 2000.

For the ruling Liberal Party, it was an uncertain time.  Rumours were circulating that finance minister Paul Martin was not going to run again.  Newspaper baron Conrad Black was threatening to use his newspaper chain to punish Chretien for denying him a knighthood.  Meanwhile, the nascent Canadian Alliance was surging in the polls, and some of the Grit caucus members were grumbling that Chretien should resign.

But Chretien was unfazed.  For nearly 40 years, his opponents had mocked his looks, his language skills, and his mental acuity.  For years, he had been wallpapering his home with his political obituaries.  And, for years, he kept winning.

It happened again in 2000, too – when Canadian Alliance leader Stockwell Day had dared him to call an election.

So, he did.  He captured many more seats than he did in the previous election, in 1997.

Surveying the political landscape Down South, during a devastating pandemic some 20 years later, I’m reminded of that “chit chat,” as Chretien refers to his telephone calls to friends.

And I’m reminded of it, particularly, when I hear what Trumpkins – on both sides of the border – have to say about Joe Biden.  Namely: that he has dementia.  That he’s senile.  That he acts inappropriately.  That he has too many scandals.  That he’s yesterday’s man.

Because that’s exactly what Conservatives used to say about Jean Chretien.  Word for word.

The attacks on Biden will be as ineffective as the attacks were against Chretien, for the same reason: both men are cut from the same cloth.

Joe Biden kicked off his winning campaign in a comparatively low-key way: he released a video on YouTube.  He said he was running to beat Donald Trump, because he was the only candidate who could.  And, in the interim, successive polls have shown that Americans know who Joe is, they like who he is, and they like him way more than Trump.

Joe Biden has what it takes to win, mainly because he never forgot his roots.  He never stopped boasting about his hardscrabble Scranton, Pa. youth.  He grew up in a big, poor Irish Catholic family in Scranton – in a crowded apartment, not a gilded Fifth Avenue penthouse apartment – and the Bidens were forced to move to Delaware when Joe was ten, where his father secured a job as a used car salesman.

He got into law school only because he got a scholarship.  He participated in anti-segregation sit-ins.  He struggled for everything he got.

They’ll keep underestimating him, however, just like they did Chretien.

Like Chretien, Biden didn’t win the top job the first time he ran for it.  But he won it – and is the presumptive Democratic presidential nominee – at precisely the right time.  When his country is hurting, and when it desperately needs healing.

Like Chretien, Biden has an Everyman appeal that cuts across demographic categories – which is why Biden won the overwhelming support of African-Americans in the South Carolina primary at the start of March, and why he never looked back.

Like Chretien, Biden often doesn’t seem to speak any of the official languages – but he has an innate ability to connect with voters, at a gut level, that conservative politicians too often don’t.

Like Chretien, too, Biden’s timing is just right.  Chretien returned to politics when Canada was being riven by endless Constitutional wars, and the growing threat of separatism, and he helped keep us together.

Biden has returned to politics at a similarly historic moment – after too many years of the racism and madness of Donald Trump, and a deadly pandemic that has claimed the lives of tens of thousands of Americans.

If Jean Chretien were to have one of his chit-chats with Joe Biden, I’m pretty sure I know what he’d say.

“They’re underestimating you again,” he’d say.  “And that’s always good, for guys like you and me.”