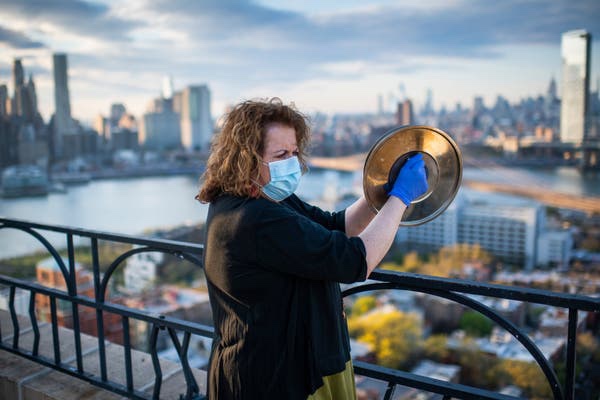 The future, no future

The New York Times‘ Frank Bruni is the writer I’ll never be. Here, in its entirety, is his column in today’s paper, about the woman above, the one who foresaw it all – and what she foresees next.

Don’t expect to feel very hopeful by the end.

I told Laurie Garrett that she might as well change her name to Cassandra. Everyone is calling her that anyway.

She and I were Zooming — that’s a verb now, right? — and she pulled out a 2017 book, “Warnings: Finding Cassandras to Stop Catastrophes.” It notes that Garrett, a Pulitzer Prize-winning journalist, was prescient not only about the impact of H.I.V. but also about the emergence and global spread of more contagious pathogens.

Cassandra, of course, was the Greek prophetess doomed to issue unheeded warnings. What Garrett has been warning most direly about — in her 1994 best seller, “The Coming Plague,” and in subsequent books and speeches, including TED Talks — is a pandemic like the current one.

She saw it coming. So a big part of what I wanted to ask her about was what she sees coming next. Steady yourself. Her crystal ball is dark.

Despite the stock market’s swoon for it, remdesivir probably isn’t our ticket out, she told me. “It’s not curative,” she said, pointing out that the strongest claims so far are that it merely shortens the recovery of Covid-19 patients. “We need either a cure or a vaccine.”

But she can’t envision that vaccine anytime in the next year, while Covid-19 will remain a crisis much longer than that.

“I’ve been telling everybody that my event horizon is about 36 months, and that’s my best-case scenario,” she said.

“I’m quite certain that this is going to go in waves,” she added. “It won’t be a tsunami that comes across America all at once and then retreats all at once. It will be micro-waves that shoot up in Des Moines and then in New Orleans and then in Houston and so on, and it’s going to affect how people think about all kinds of things.”

They’ll re-evaluate the importance of travel. They’ll reassess their use of mass transit. They’ll revisit the need for face-to-face business meetings. They’ll reappraise having their kids go to college out of state.

So, I asked, is “back to normal,” a phrase that so many people cling to, a fantasy?

“This is history right in front of us,” Garrett said. “Did we go ‘back to normal’ after 9/11? No. We created a whole new normal. We securitized the United States. We turned into an antiterror state. And it affected everything. We couldn’t go into a building without showing ID and walking through a metal detector, and couldn’t get on airplanes the same way ever again. That’s what’s going to happen with this.”

Not the metal detectors, but a seismic shift in what we expect, in what we endure, in how we adapt.

If America enters the next wave of coronavirus infections “with the wealthy having gotten somehow wealthier off this pandemic by hedging, by shorting, by doing all the nasty things that they do, and we come out of our rabbit holes and realize, ‘Oh, my God, it’s not just that everyone I love is unemployed or underemployed and can’t make their maintenance or their mortgage payments or their rent payments, but now all of a sudden those jerks that were flying around in private helicopters are now flying on private personal jets and they own an island that they go to and they don’t care whether or not our streets are safe,’ then I think we could have massive political disruption.”

“Just as we come out of our holes and see what 25 percent unemployment looks like,” she said, “we may also see what collective rage looks like.”

Garrett has been on my radar since the early 1990s, when she worked for Newsday and did some of the best reporting anywhere on AIDS. Her Pulitzer, in 1996, was for coverage of Ebola in Zaire. She has been a fellow at Harvard’s School of Public Health, was a member of the Council on Foreign Relations and consulted on the 2011 movie “Contagion.”

Her expertise, in other words, has long been in demand. But not like now.

Each morning when she opens her email, “there’s the Argentina request, Hong Kong request, Taiwan request, South Africa request, Morocco, Turkey,” she told me. “Not to mention all of the American requests.” It made me feel bad about taking more than an hour of her time on Monday. But not so bad that I didn’t cadge another 30 minutes on Thursday.

She said she wasn’t surprised that a coronavirus wrought this devastation, that China minimized what was going on or that the response in many places was sloppy and sluggish. She’s Cassandra, after all.

But there is one part of the story she couldn’t have predicted: that the paragon of sloppiness and sluggishness would be the United States.

The highlights — or, rather, lowlights — include President Trump’s initial acceptance of the assurances by President Xi Jinping of China that all would be well, his scandalous complacency from late January through early March, his cheerleading for unproven treatments, his musings about cockamamie ones, his abdication of muscular federal guidance for the states and his failure, even now, to sketch out a detailed long-range strategy for containing the coronavirus.

Having long followed Garrett’s work, I can attest that it’s not driven by partisanship. She praised George W. Bush for fighting H.I.V. in Africa.

But she called Trump “the most incompetent, foolhardy buffoon imaginable.”

And she’s shocked that America isn’t in a position to lead the global response to this crisis, in part because science and scientists have been so degraded under Trump.

Referring to the Centers for Disease Control and Prevention in Atlanta and its analogues abroad, she told me: “I’ve heard from every C.D.C. in the world — the European C.D.C., the African C.D.C., China C.D.C. — and they say, ‘Normally our first call is to Atlanta, but we ain’t hearing back.’ There’s nothing going on down there. They’ve gutted that place. They’ve gagged that place. I can’t get calls returned anymore. Nobody down there is feeling like it’s safe to talk. Have you even seen anything important and vital coming out of the C.D.C.?”

The problem, Garrett added, is bigger than Trump and older than his presidency. America has never been sufficiently invested in public health. The riches and renown go mostly to physicians who find new and better ways to treat heart disease, cancer and the like. The big political conversation is about individuals’ access to health care.

But what about the work to keep our air and water safe for everyone, to design policies and systems for quickly detecting outbreaks, containing them and protecting entire populations? Where are the rewards for the architects of that?

Garrett recounted her time at Harvard. “The medical school is all marble, with these grand columns,” she said. “The school of public health is this funky building, the ugliest possible architecture, with the ceilings falling in.”

And what America needs most right now, she said, isn’t this drumbeat of testing, testing, testing, because there will never be enough superfast, super-reliable tests to determine on the spot who can safely enter a crowded workplace or venue, which is the scenario that some people seem to have in mind. America needs good information, from many rigorously designed studies, about the prevalence and deadliness of coronavirus infections in given subsets of people, so that governors and mayors can develop rules for social distancing and reopening that are sensible, sustainable and tailored to the situation at hand.

America needs a federal government that assertively promotes and helps to coordinate that, not one in which experts like Tony Fauci and Deborah Birx tiptoe around a president’s tender ego.

“I can sit here with you for three hours listing — boom, boom, boom — what good leadership would look like and how many more lives would be saved if we followed that path, and it’s just incredibly upsetting.” Garrett said. “I feel like I’m just coming out of maybe three weeks of being in a funk because of the profound disappointment that there’s not a whisper of it.”

Instead of that whisper she hears wailing: the sirens of ambulances carrying coronavirus patients to hospitals near her apartment in Brooklyn Heights, where she has been home alone, in lockdown, since early March. “If I don’t get hugged soon, I’m going to go bananas,” she told me. “I’m desperate to be hugged.”

Me, too. Especially after her omens.