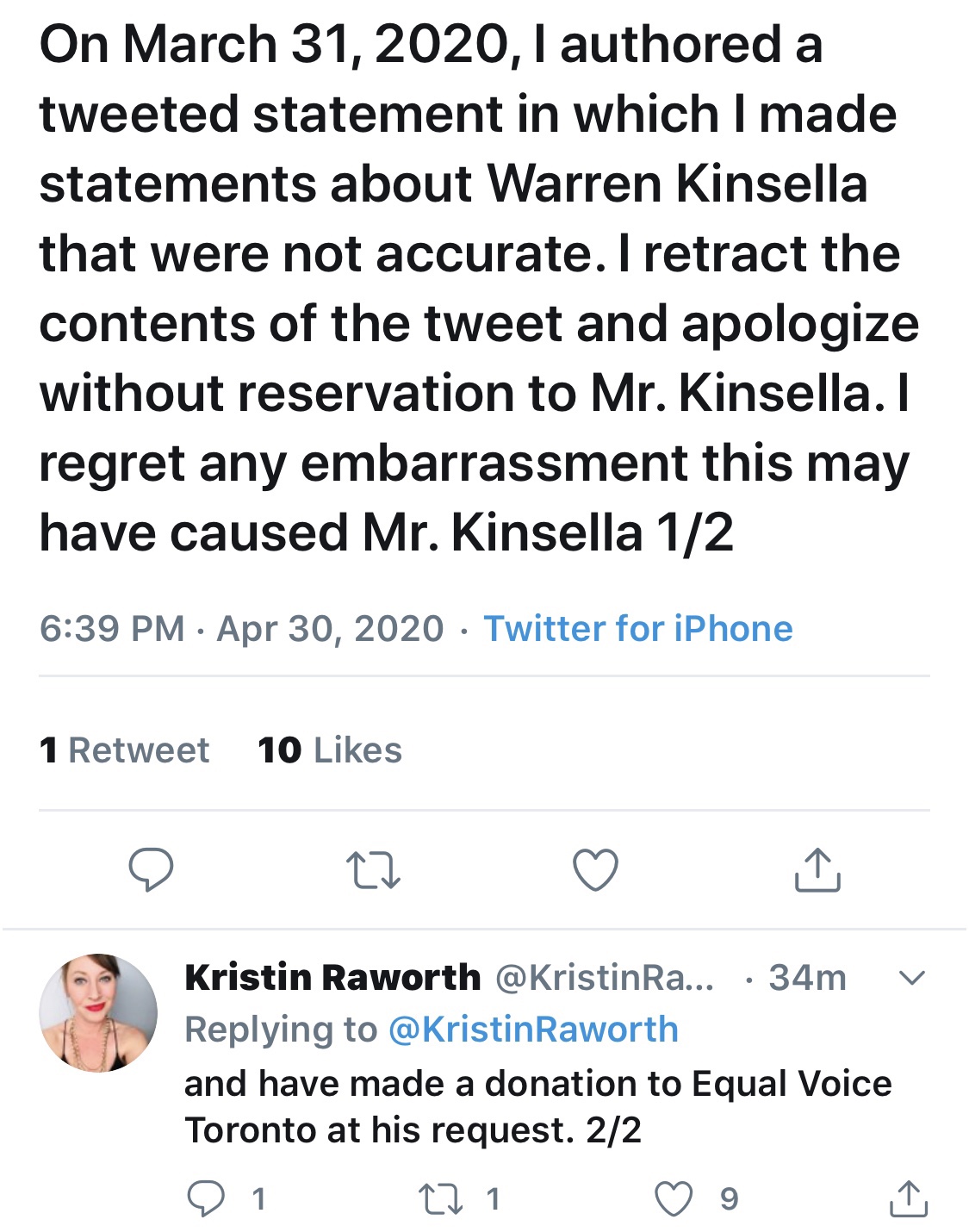 When you read this important essay, keep in mind that Kristin Rayworth was obliged to apologize to me, retract, pay my legal fees, and make a donation to Equal Voice on my behalf.

That says plenty. So does Mr. Hehr.

More than two years have passed since I faced the #MeToo accusations that led to me resigning from Cabinet. While it has been a whirlwind, I have taken pause every day since to reflect not just on the accusations, but how I have lived my life.

This came into sharp focus a month ago when the woman who accused me of sexual harassment in 2018 apologized for making libellous statements about Canadian public figure Warren Kinsella. She falsely claimed that he had abused women and hit his wife, and was forced to retract these statements. Kinsella wrote an article that provided some context for all of this, and you can read it in the link below. Here’s how he closed it: “… to Kent Hehr, wherever you are: I now wonder whether you deserved better. I wonder that a lot.”

When I read this, my mind immediately went to the classic Clint Eastwood film, Unforgiven. My favourite scene is when Eastwood’s character, an aging outlaw killer, stands above the corrupt sheriff who pleads, “I don’t deserve this, to die like this. I was building a house.” Eastwood’s character replies, “Deserve’s got nothing to do with it.”

I stand by what I wrote to Canadians in the spring of 2018. The same woman who accused Kinsella alleged, when I was an MLA twelve years ago and she worked at the legislature, that I had called her “yummy” in an elevator. I did not, and do not, recall ever meeting her. I certainly don’t recall ever saying “yummy” to her (or to anyone, for that matter).

In response to this accusation I wrote, “I have never been perfect but have always strived to do better,” and this remains true today. The important question for me is whether I could become a better person from the #MeToo movement. The answer has proven to be yes.

But it was not enough, not even close.

I have learned that it matters not just who you affiliate with, but how you speak and listen. Being a progressive is a choice each and every day, to fight for certain values as well as to live by them. It meant looking at my own behaviour and language. It means humility by consistently choosing to be humble. It means renouncing attitudes once taken for granted.

The truth is: I have acted inappropriately at times in my life—sometimes inadvertently, sometimes by choice. I grew up playing hockey, and if there was ever a place for toxic masculinity to fester it was in the dressing room. Everything centred around sex; it was far from healthy or respectful, and I willingly took part. I spent more than my fair share of time sitting around a pub table where improper conversations about women were commonplace.

I didn’t see, or try to see, the inherent harm in what I thought was harmless banter. This was wrong. Even as an elected politician, I could revel in a bad joke with friends, colleagues and my own staff. I realize now more than ever that this was also wrong. I take personal responsibility, and what I stated in 2018 doesn’t just stand: it takes on new meaning for me every day.

Here’s another quote I love from Unforgiven. The Schofield Kid says, “Yeah…well, I guess they had it comin’.” Eastwood’s character replies, “We all have it comin’, kid.” I agree: sometimes we do have it coming, whether we deserve it or not.

At 50, there are more days behind me than ahead. I’ve learned during my time rolling this earth that, while “deserve” may have nothing to do with it, forgiveness does. I hope to be forgiven and I want to forgive others as well.