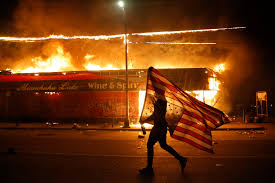 My latest: we’ve been here before

Riots across the country.  Dozens of them, every night.

Blood all over the streets.  Broken glass crunching underfoot.  Tear gas and smouldering police cars combining to produce a stench that is as unbearable as it is unforgettable.  Fear is everywhere, tight as the zip ties on a protestor’s wrists.

The protestors? After night and night of this, they are spent but still unable to sleep. Like someone once sang, they ain’t got no swing – except for the ring of the truncheon thing.

Hundreds injured.  Some killed.  More than $100 million in property damage – lost to looting and arson and destruction, much of it done by whites with no skin in the game.  As it were.

The United States is at war with itself.  Like Dr. King once said, a hundred lifetimes ago, the “nation’s Summers of riots are caused by our Winters of delay.”  They will continue to happen, he said back then, “as long as America postpones justice, equality and humanity.”

The postponement of justice, equality and humanity has been presided over, in the main, by the Republican candidate for President of the United States.  A vile, contemptible shadow of a man, whose default position is racism and and sexism and hate and dark conspiracy theories.

It’s his metier.  In this Summer of Riots, it works for him.  Always has.  He’s been here before.

The Republican nominee decries the riots, but he secretly revels in them. Every brick thrown, every car torched, every small business reduced to ashes – they are re-electing him.

And the Republican smiles, his prophecy nearly complete.

In all, there have been 159 riots.  In Buffalo, the riot started on the East Side.  Some black teenagers had been breaking some windows on William Street.  Within hours, 200 riot police are dispatched, and the street battles commence in earnest. The following day, it gets worse, with cars flipped over, stores looted, graffiti spray-painted everywhere. This time, 400 police are on hand. By the end, forty blacks are seriously injured – nearly half from bullet wounds.

In Newark, two white cops arrest a black cab driver, who has signalled to pass a double-parked police car.  They arrest him, viciously beat him, and take him to the 4th Police Precinct, where he is charged with assaulting the officers and “making insulting remarks.” Residents of a nearby public housing project see the unconscious taxi driver being being dragged into the precinct, and a large crowd gathers outside.  Rocks are thrown; clubs are brought down on black bodies.

Within hours, a march is organized to protest police brutality in Newark. Looting commences, and spreads quickly along Springfield Avenue, the business district. Molotov cocktails are thrown; buildings catch fire. Shotguns are issued to police. They are told to “fire if necessary.” So, a woman is killed in a fusillade of bullets directed at the window of her second-floor apartment. Things get worse: there are more riots, looting, violence, and destruction.  Many, many are hurt; some are killed.

That is just Buffalo and Newark, but it’s happening all over, like some grim newsreel footage of a broken country, falling to pieces.

Hundreds converge on the house where the Republican presidential is huddled behind drawn curtains.  The Republican summons a senior aide, and says he wants “ideas about how to push the line.”  The aide is delighted.

He says the turmoil outside can be “made into a huge incident, if we work hard to crank it up.” It could be a “really major story,” he says, that “might be effective” on Election Day.

And so they get to work.  Having decided to stoke a racial backlash, and then ride it to victory, the Republican Party’s candidate for the presidency threatens the rioters at every opportunity. The rioters are filled with “bitter hatred” for all that is good in America, he says.

“It will get worse unless we take the offensive!” he thunders.  “We must restore order!”

By now, a columnist’s sleight of hand may have been revealed.  The Republican presidential nominee above is not Donald Trump, it is Richard Nixon.  The year is not 2020 – it is 1967 and 1968, when Nixon was catapulted into the White House by a white middle class that has grown terrified of race riots on their TV screens every night.

Dr. King, in those quotes up above – in that speech he made at Stanford in 1967, speaking to a mostly-white audience about the Watts riots in Los Angeles – also said that “riots are the language of the unheard.” And they are.  They don’t just spring out of thin air – riots happen for a reason.

But they are also “socially destructive and self-defeating,” Dr. King said.

And if we’re not careful, they may re-elect Donald Trump.