#WEgate: your money, their friends 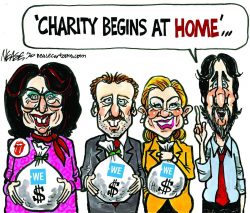 And it was backdated, too.

The deal that WE Charity struck with the federal government allowed it to collect the fee for administering the Canada Student Service Grant within one week of the Trudeau Liberals announcing the group would run the new program.

The contract, which was first announced on June 25, but cancelled on July 3 amid conflict-of-interest accusations against Prime Minister Justin Trudeau, would allow the charity to collect $33-million in fees by July 2.

It was publicly released Monday through the House of Commons finance committee, which is studying the controversy around the government’s decision to award the contract to the charity despite multiple financial ties that the families of Mr. Trudeau and Finance Minister Bill Morneau have with WE. On Monday, the finance committee confirmed that Mr. Trudeau and his chief of staff, Katie Telford, will testify on Thursday afternoon.

Both Mr. Trudeau and Mr. Morneau have apologized for failing to recuse themselves from the cabinet decision to award WE the contract. The Conflict of Interest and Ethics Commissioner is investigating whether they broke federal ethics laws.