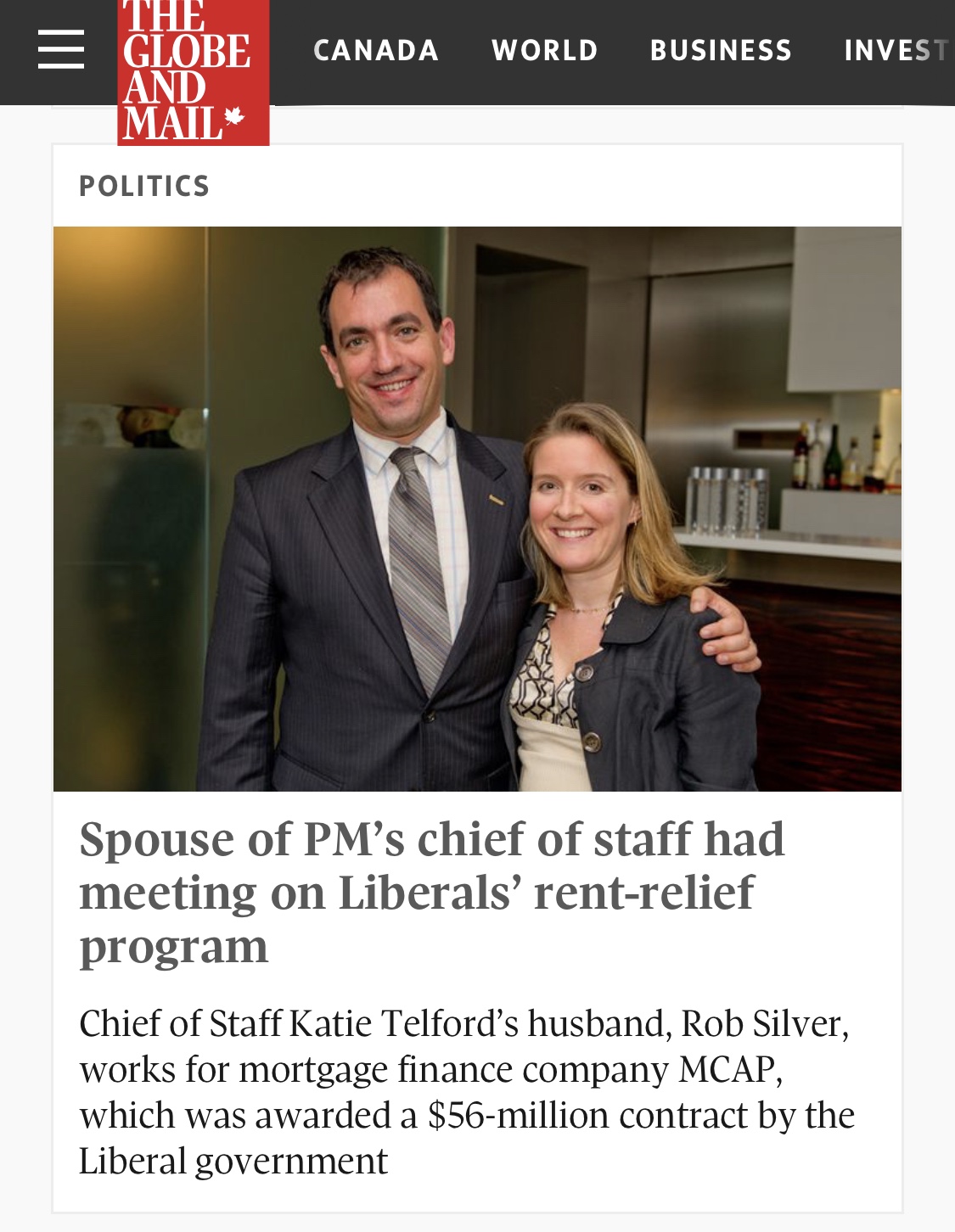 My latest: when you become what you came to change

There’s even a name for it.

It’s in the dictionary and everything. The Merriam-Webster people define it as “government by those who seek chiefly status and personal gain at the expense of the governed.”

That’s what we’ve got in Canada, now. Our national government, the Justin Trudeau-led government, is that.

Katie Telford is the Chief of Staff to Prime Minister Justin Trudeau. The sub-headline read: “The PMO says Telford had nothing to do with the contract between Robert Silver’s firm and a federal crown corporation.”

When the story landed, you could practically picture Trudeau’s factotums congratulating themselves: the story had come out on a Friday evening, when no one would really notice it. One-day wonder, they’d tell themselves, then go back to Googling their names and posting selfies.

But then the Globe and Mail published, too.

“Spouse of PM’s chief of staff had meeting on Liberals’ rent-relief program,” read the headline on the Globe story, written by Marieke Walsh.

The lede paragraph expanded on it: “The spouse of the Prime Minister’s chief of staff took part in a meeting with the Crown corporation responsible for the government’s commercial rent-relief program after the company where he works was awarded the contract to administer the program, and before the contract was extended.”

Both stories were atop their respective web sites. And, at that point, Trudeau’s insular little clan may have fretted, a bit. But then they reminded themselves: the boss had been found guilty of taking gifts from lobbyists, and he got through it.

And he – and his staff – had conspired, 22 separate times, to stop the criminal prosecution of a corrupt Quebec-based corporate donor. And they’d driven out two brilliant women – one Indigenous – who tried to stop them from doing it.

And there was the time the boss had been caught wearing racist blackface – not once, not twice, but three times!

So this latest controversy – wherein Trudeau and his cronies had again been caught prospering in the middle of a pandemic that has seen millions of Canadians lose their jobs – wasn’t such a big deal, to them. They all gave a Trudeauesque shrug, and went back to seeing how many likes they were getting on Instagram.

But they should care. They should.

It’s true that voters hear the “scandal” allegation too often. The media, and politicos, allege wrongdoing all the time, and thereby become the boys and girls who cry wolf.

It’s also true that no one has been outfitted with an orange pantsuit and handcuffs, and trotted off to Millhaven yet. That is true, as Nixonian as it sounds: no one has gone to jail yet.

And it’s true that the coronavirus pandemic should be the biggest concern of every one of us. The virus has infected tens of thousands of Canadians, and killed 9,000 of us. It has shattered our economy, and changed the way we live our lives. All true.

But the reason why all of Justin Trudeau’s latest scandals are so profoundly, irretrievably scandalous is just that: the pandemic. Because the allegation is that Trudeau’s cabal sought to enrich themselves during a pandemic that is impoverishing millions of Canadians.

What’s the problem, the dwindling number of Liberal partisans ask? The problem is this: the governed were losing their homes, losing their jobs, losing their futures. While Trudeau’s gang were apparently making out like bandits.

That is not merely wrong, it is actually evil. It is beyond the pale. Beyond words.

The Prime Minister’s mother, being paid hundreds of thousands of dollars by a “charity” to give two-minute talks? His brother, too? His wife and his Finance Minister getting free trips? The children of cabinet ministers getting jobs when they shouldn’t?

Those aren’t allegations. They are facts. They are things that have happened – provided by a vile, wicked “charity” that hired detectives to spy on Canadian reporters and their families. Was some of the public monies Justin Trudeau earmarked for his friends to be used to tail journalists? Isn’t that against the law?

It goes on and on and on. It never stops, this fetid, foul stew of corruption and moral blindness. Even during a pandemic, the Trudeau government’s descent into the muck continues unabated.