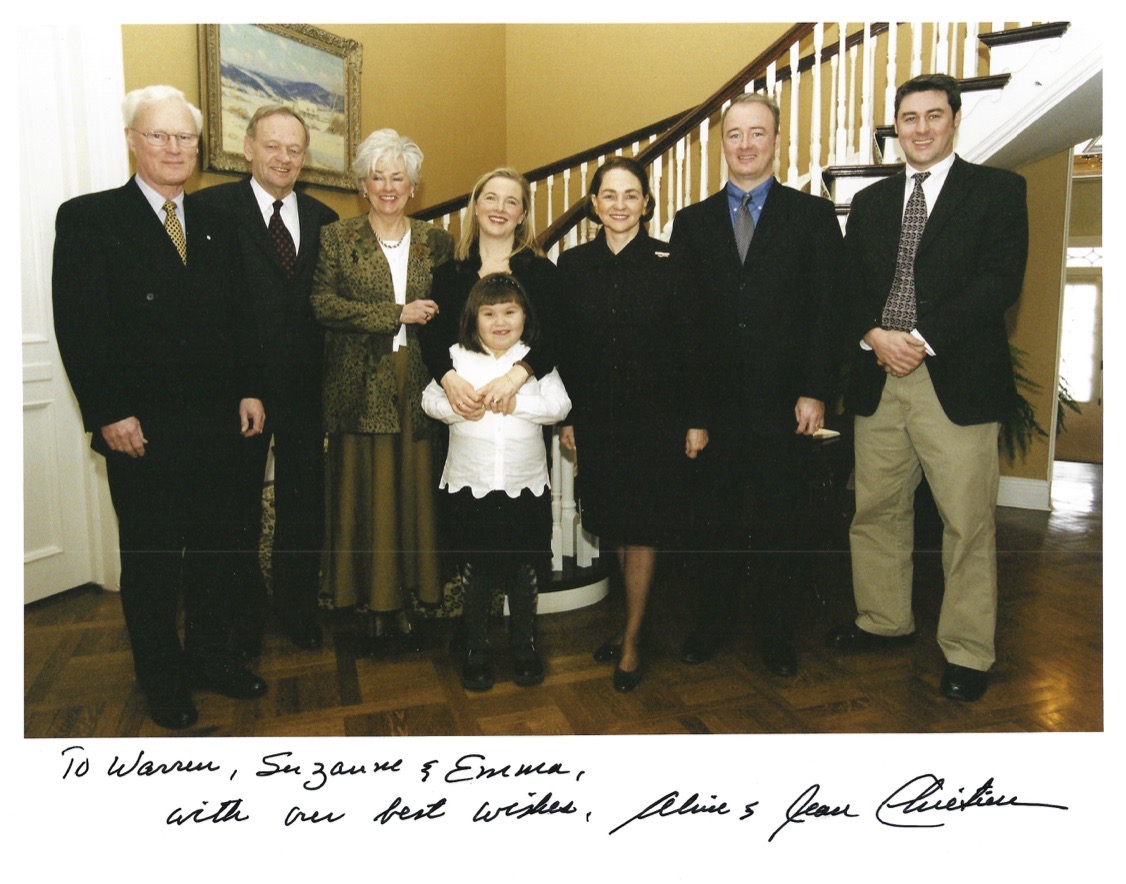 Imagine you are in an Ottawa hotel suite with the former Prime Minister of Canada and a former President of the United States.  The Secret Service are watching the door, and there’s a photographer getting ready to take some shots.  Imagine that.

But then imagine that the door opens, and in walks Aline Chretien, looking as beautiful and as elegant as always.

And then imagine that the former President, Bill Clinton, rises to greet her, like one would an old friend.  And there is genuine affection and respect in his voice.

Imagine that the former Prime Minister, Jean Chretien, also rises to greet his wife.  And there is love and actual reverence shining on his face, and in what he says to her.  She smiles, and it is such a beautiful smile.

Imagine all that.  And then Bill Clinton insists that Aline Chretien stands at the centre, at the middle, because that’s where she belongs.  And everyone smiles, and the photographer takes the picture.

In the office, we simply referred to her as “Madame.” She came from a small town, with humble roots, like him.  She did not ever require us to stand on ceremony for her.  She was quiet, much of the time, and left the politics to him.

But she loved people, and people loved her.  One night, he invited me to come to a party at 24 Sussex.  I wasn’t sure why I was there: the place was full of their old friends from Shawinigan, all laughing and talking. There were no politicians or celebrities. They were cab drivers, and labourers, and teachers and waitresses and small business owners.

The Chretiens introduced me to their Shawinigan friends as “a fighter” for them, which was an honour.  And then Madame sat down at the piano – an instrument she had taught herself to master, later in life – and started to play and sing.  And the place was alive with her voice and everyone singing along.

She fiercely defended her husband for years, going back to when they were teenagers.  When the Conservatives mocked his facial paralysis in an ad, she was furious, and told me that “Jean is handsome.” And everyone knows the story, by now, about how she dispatched an intruder at 24 one night, using an Indigenous sculpture to do what the RCMP could not.

But when a too-ambitious Finance Minister tried to drive her husband out, she became resolute.  They had a mandate, and they would not be pushed.  One night, at a wedding, she took me and a couple other former Chretien staffers aside.  She pointed at me. “He tells the truth about Jean,” she said to them.  “He fights for Jean.  We all have to fight for Jean.”

And we did, we did.  But none as much as her.  She was his rock, his truest love, his everything.  And I confess that I am so worried for him, now.

Did you ever love someone so much, that they took your breath away, when they simply walked into a room?

Did you ever find yourself simply sitting at the edge of a group of people, watching your true love charm and delight those people, and saying nothing, because you are so proud and amazed that she chose you?

Did you ever love someone so much that you accepted, as a matter of course, that God sent her to you, so that you could breathe again, and so you could put one foot in front of the other, and go out into the day?

And we all loved her as we love him.