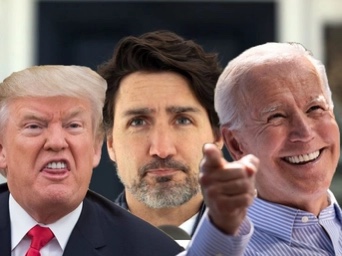 Justin Trudeau is a three.

The late, great Rafe Mair left us with one of the truest of truisms: in politics, if you are a three, it doesn’t matter — if everyone nearby is a two.

Never has Mair’s observation been more true than with Justin Trudeau. The Liberal leader may be a dwarf, politically, but he still dwarfs all the dwarfs around him. (True.)

Such was the case with one Donald Trump, soon to be a private citizen. Trump was the best thing that ever happened to Justin Trudeau.

Trudeau had no shortage of wounds, all of them self-inflicted. And in each and every case, however bad Trudeau looked, Trump could always be counted upon to look far worse.

Take Trudeau‘s commitment to ethics (please). Trudeau is the first sitting prime minister to have been found to have violated ethics rules multiple times.

Remember the Aga Khan scandal? In that one, Trudeau took gifts from a lobbyist – free flights, traveling to a private island, and then saying nothing was wrong when he got caught.

Well, it was wrong. Plenty wrong. So said the ethics commissioner, who found Trudeau had flagrantly violated conflict of interest laws.

Same with the SNC Lavalin scandal, otherwise known as Lavscam. In that one, Trudeau and his officials – including his finance minister, who hastily-departed in the middle of yet another ethics imbroglio — tried to bully his justice minister into giving a sweetheart deal to a Quebec-based Liberal Party donor facing prosecution for corruption.

Because she refused to go along with the scheme, Trudeau drove out his female and Indigenous justice minister. He was again cited for wrongdoing by the ethics counselor.

But, even after all that, Trump made Trudeau look like a rank amateur. Trump actually attempted to get a foreign power to investigate a detested political rival who was also an American citizen – one Joe Biden, Democrat — thereby, earning himself a full congressional investigation and a later impeachment.

Another example: racism. In the middle of last year‘s federal election, Justin Trudeau was found to have worn racist blackface no less than three times. He even admitted that he may have done it more times than that.

It was inarguably racist, and it made Canada an international laughing stock.

Well, Donald Trump outdid even that. After the terrible events in Charlottesville — where an innocent woman was actually killed by a white supremacist — Trump said that there were “fine people” to be found among the ranks of the neo-Nazis and white supremacists.

That’s not all: in the middle of his first debate with Joe Biden, Trump declined to condemn white supremacy and groups like the racist Proud Boys.

During the coronavirus pandemic, which has been the defining political event of our collective lifetimes, Justin Trudeau again found a way to unimpress.

At the start of the pandemic, his government actively discouraged the wearing of masks, sniffed that the risk to Canadians was “low,” and actually called those who wanted to shut the border to China racist.

In retrospect, not impressive. But once again, Donald Trump was determined to impress even less.

He said the virus would go away in the Spring (it didn’t). He said it was a hoax (it wasn’t). He said people should consider injecting themselves with bleach (they shouldn’t).

And so on and so on. Justin Trudeau is a three. But Donald Trump was always, always a two.

Heads up, Justin: Joe Biden may not be perfect, but he’s no two.