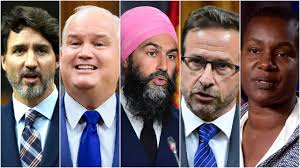 My latest in Sun Media: the best and worst public figures in 2020

1. Justin Trudeau: Did OK at start of pandemic. CERB was a good program. But blew any goodwill with WE scandal. Oozes insincerity. Will probably win again.

2. Erin O’Toole: Smarter than Andrew Scheer, which isn’t hard. Ran as a social conservative, won leadership, executed a whiplash-inducing about-face. Became a progressive conservative. Set self back months with idiotic claim that genocidal residential schools were for “education.”

3. Jagmeet Singh: Shovels Trudeau’s driveway, washes Trudeau’s car, jumps off any bridge Trudeau tells him to. Not a party leader as much as a Liberal Party staffer.

4. Elizabeth May: Who? What? More importantly, why?

5. Maxime Bernier: See Elizabeth May, above.

6. Patty Hajdu: Alleged to be federal Minister of Health. Told us all to stay at home, flew hither and yon at taxpayers’ expense. Told us all to wear masks, didn’t herself when on aforementioned taxpayer-subsidized trips. Other than that stuff, doing great.

7. Derek Sloan: If knuckle-dragging, mouth-breathing cavemen are your choice, Tory MP Sloan is your guy. Otherwise an ongoing embarrassment to his riding, his party, and the nation.

8. Bill Morneau: It’s not nice to pick on the politically dead, but no one ever said we were nice. Forgotten French villas! Unbalanced budgets! WE scandal! Multiple ethics probes! This former finance minister did ‘em all. Then he took the fall.

9. Lynn Beyak: There are lots of things for which Stephen Harper shouldn’t get the blame. For his Senate appointee Beyak, he deserves blame, big time. An unelected nobody who became a somebody for promoting racism, Beyak remains on the public teat. She deserves defeat.

10. The Troughers: You know why most newbie MPs fear another election, don’t you? They need six years of “service” to get their gold-plated MP pension. Until they reach that milestone, an election remains highly unlikely.

1. Premiers, generally: They hail from different regions, they belong to different parties. But our Preems have been the pre-eminent pandemic politicos. They’ve made some mistakes, sure – how would you strike the health/life vs. economy/jobs balance? – but have generally done well.

2. Brian Pallister, specifically: Ditching the script, Manitoba’s Premier made an emotional on-camera plea for people to wear masks and safely distance, and won acclaim from everyone from political opponents to members of KISS. Shout it out loud.

3. Doug Ford, specifically: My firm did work for Ford’s government once in the past, but that hasn’t coloured my judgment: during the pandemic, a new Doug Ford has been revealed, and voters like it. Kinder and gentler sits well on his shoulders. Keep at it.

4. Chrystia Freeland: The erstwhile feminist Deputy Prime Minister isn’t Superwoman – her silence during the savaging of Jody Wilson-Raybould and Jane Philpott was one major lapse – but she is clearly smart and capable. Unlike her boss.

5. Annamie Paul: The newly-minted Green Party leader is unknown to many Canadians – but all Canadians should be happy to see a black, Jewish woman smash several glass ceilings and win. Next, a seat in the Commons!

6. John Horgan: B.C.’s premier deserved condemnation for calling an unnecessary election during the pandemic. But he won a majority because he’s done a good job during the selfsame pandemic.

7. Provincial public health officers: Unlike their federal counterpart, the various provincial/municipal public health bosses have been pretty outstanding. Deena Hinshaw in Alberta, Bonnie Henry in B.C., Horacio Arruda in Quebec, Eileen de Villa in Toronto and others – they communicate, they’re coherent, and they’re clear. (Not the one in Ottawa, however.)

8. The Mayors: Full disclosure – I’ve volunteered for Toronto’s John Tory and Ottawa’s Jim Watson in the past. But those two – along with Calgary’s Naheed Nenshi, Edmonton’s Don Iveson, Mississauga’s Bonnie Crombie, Vancouver’s Kennedy Stewart, and others – have not hesitated to burn political capital to push unpopular public health measures. Gutsy.

9. CERB bureaucrats: The Canadian Emergency Response Benefit literally saved millions of Canadians from hunger and worse during the pandemic. Thank the nameless officials in the Privy Council Office, Revenue Canada and Employment and Social Development who came up with the CERB. Not politicians who later claimed credit.

10. The other unseen leaders: The pandemic has been the biggest political disruption of our lifetimes. We have held it together, mostly, thanks to the selfless efforts of thousands of anonymous public servants everywhere. We owe them thanks, and a (hopefully) better New Year.

Warren Kinsella is a former Special Assistant to Jean Chretien.