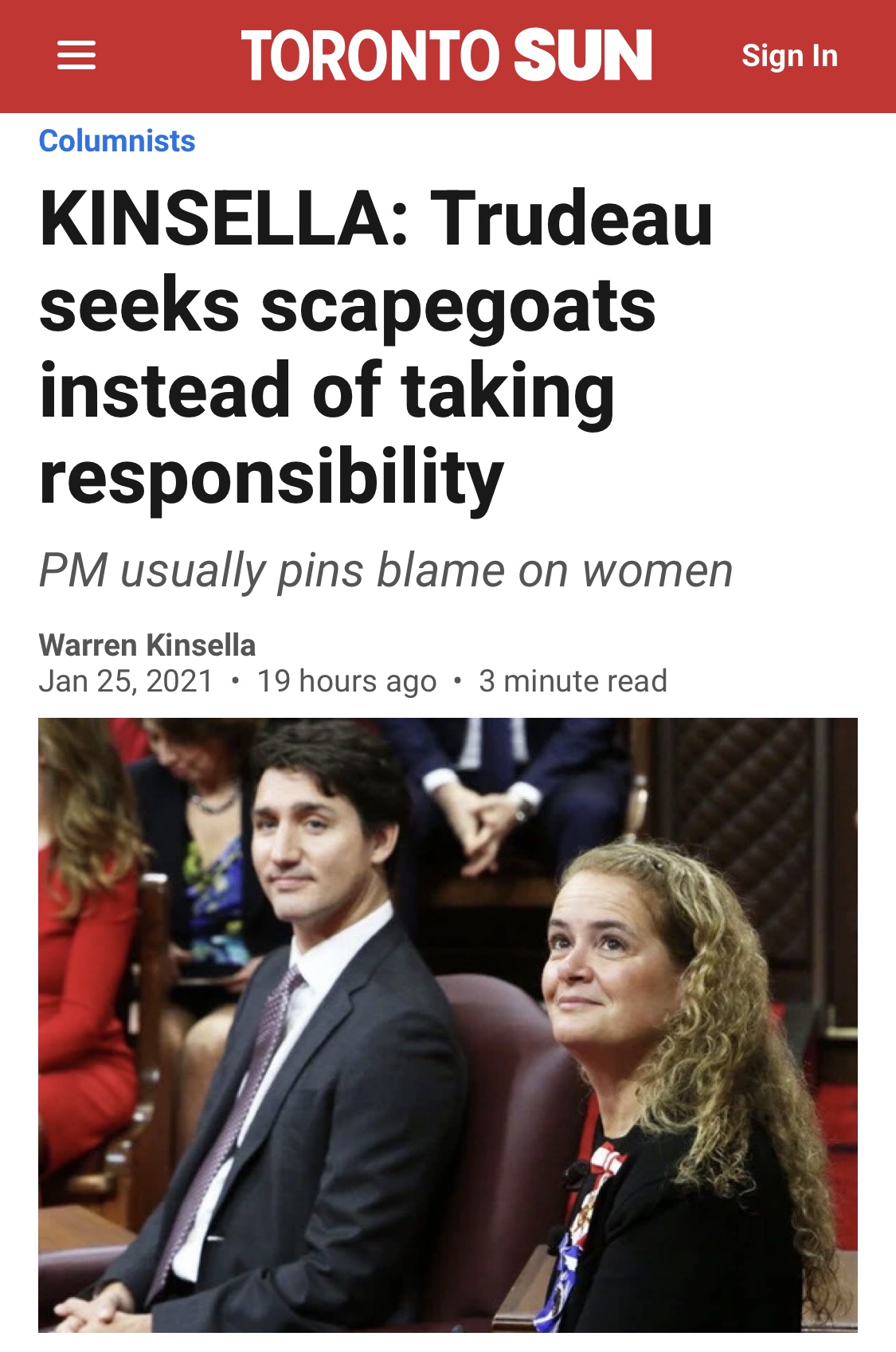 Usually, when Justin Trudeau is looking for someone to throw to the lions, he prefers women.

Jane Philpott was one; she got kicked out of the Trudeau Liberal Party for telling the truth, and for refusing to go along with obstruction of justice. Oftentimes, however, Trudeau exhibits a fondness for scapegoats who are both women and minorities.

Indigenous leader Jody Wilson-Raybould fit both requirements, and was exiled and defamed by Trudeau because she – like Philpott – believed in the rule of law. Bardish Chagger came perilously close to Wilson-Raybould’s fate for the WE scandal. But Bill Morneau – a white guy! – got the bullet instead.

That was almost unprecedented. It should’ve been a Heritage Minute, it was so historic.

“Who knows where her mind was,” said the Feminist-in-Chief, deftly (a) declining to take responsibility for what would likely be a charge of sexual assault for a lesser mortal and (b) insinuating that the victim’s “mind” was, well, not all there.

He was at it again, last week, when it was revealed to all and sundry that ex-Governor General Julie Payette had fewer people skills than Hannibal Lecter. And when we all learned that Trudeau had spent considerably less time vetting Payette than the rest of us reserve for, say, adopting a mid-pandemic rescue puppy.

Payette mocked people who believed in religion. She’d run down a visually-impaired woman who later died. She’d assaulted her ex-husband and was charged, but not prosecuted. She arguably had the managerial skills of Pol Pot.

In no time at all, sordid truths about Payette started to spill out: the abuse of staff, the humiliations, the reign of terror. And – as my colleague Brian Lilley wrote in this paper – the resulting unsourced leaks about Payette to CBC always seemed to coincide with those days when Trudeau’s WE scandal was reaching a fever pitch. Sheer coincidence, we’re sure.

Trudeau, as is his wont, declined to take any responsibility whatsoever for Payette-gate. He wouldn’t apologize, either.

Instead, he sent out anonymous PMO fart-catchers to hiss to the Globe and Mail that Jean Chretien was to blame. Seriously.

You know, Jean Chretien. He was Prime Minister decades ago. Him, my former boss.

Chretien was somehow to blame for Payette, whispered the faceless and gutless PMO assassins. The Globe dutifully printed it.

Was Jean Chretien perhaps asked if Julie Payette seemed okay? Sure. Trudeau needed a female and francophone for GG, and Payette was both.

But, last time we checked, Jean Chretien didn’t run a headhunting firm. He didn’t peck away at Google, doing the Payette vet.

Has been since 1931. Since that year, every single one of Canada’s governors-general has been picked by the Prime Minister. The Queen merely rubber-stamps whomever the PM picks.

The dastardly Stephen Harper, who gets blamed by Trudeau for every bird that falls from the sky, set up an expert panel to help select and vet candidates for Governor-General. It was a good idea. Among other things, if something went wrong, Harper could always blame the committee. Smart.

Instead, Trudeau dumped the panel. And now all of the Payette-mess blame has landed unceremoniously at the novelty-socked feet of Justin Trudeau. He’s wearing it, big time.

In a sense, he’s likely grateful. Payette-gate has diverted the nation’s attention away from the fact that we are no longer getting any vaccines, and that people are literally going to die who weren’t supposed to die. Justin Trudeau was likely grateful for the channel-changer, messy as it was.

Still, it would’ve been nice to find a woman to pin the whole thing on.

Blaming women, after all, is the way Justin Trudeau likes it.