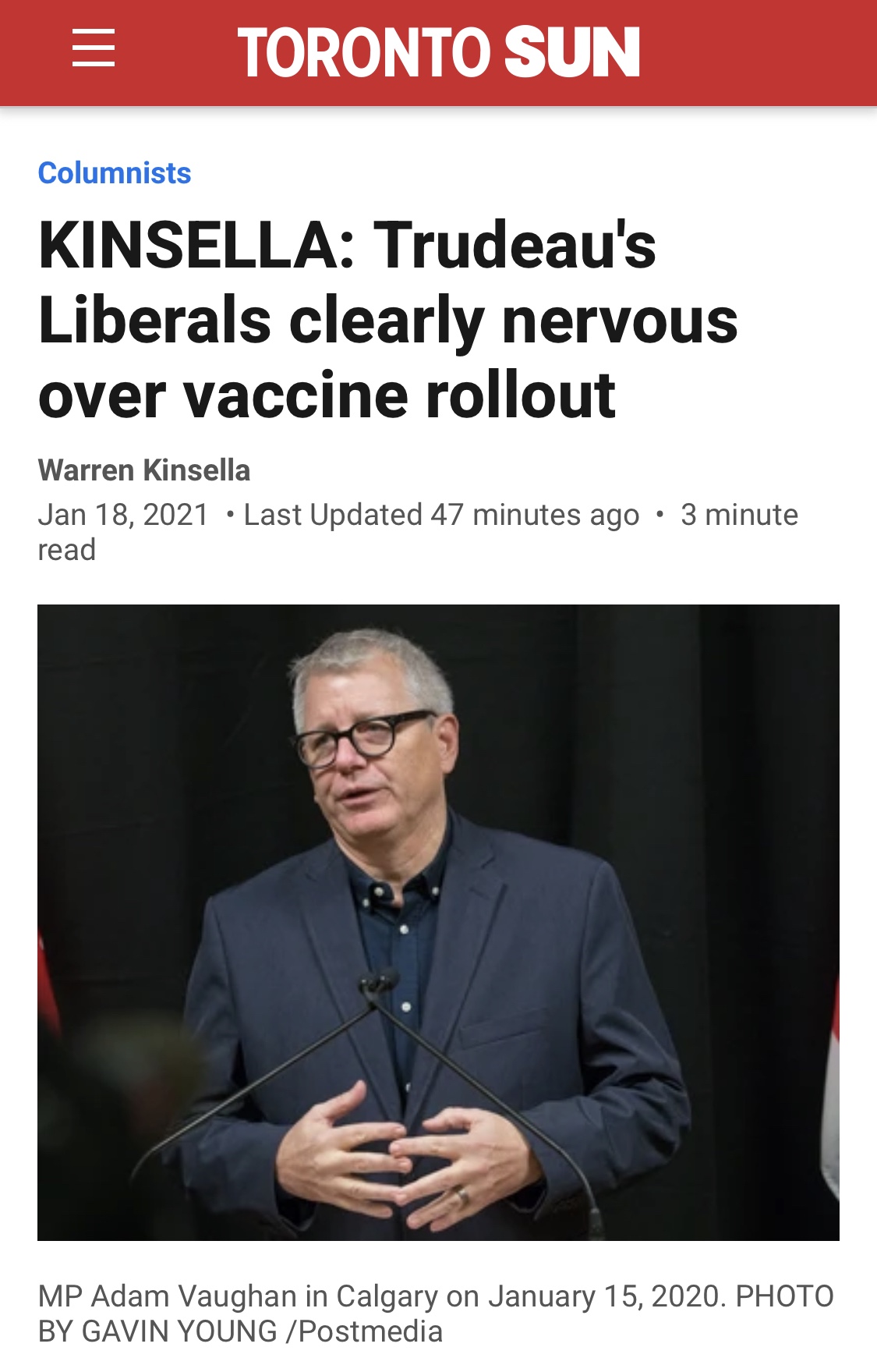 My latest: when they’re attacking you, they’re losing

When they start braying and screeching, you know you’re winning.  When they ignore you, you’re losing.

This writer has managed political war rooms for many years, from coast to coast.  And that’s what I always tell the fresh-faced youngsters who make up these war rooms: “When the other side start going after you personally, you know you’re on the right track.”

(Other war room truisms: “Let your detestation for the other side wash over you like a purifying force.”  And: “Get your foot on their neck, and don’t let up until the day after the election.”)

The war room truth about braying and screeching, above, was particularly true this week.

This week, Canadians – and the world – started to see how the Justin Trudeau government has dropped the ball on obtaining vaccines to fight the coronavirus.

To date, 1.448 per cent of Canadians have received one shot of the Pfizer or Moderna vaccines.  Israel has vaccinated 30 per cent of its population.  The United Arab Emirates, 20 per cent.

As my colleague Brian Lilley reported on the weekend: “Despite being a G7 nation, and one of the first to approve both the Pfizer and Moderna vaccines, Canada ranks 12th in the world.  Why? A lack of supply.  Provinces can’t deliver doses if the federal government doesn’t deliver them.”

And the feds just aren’t delivering them, or delivering them fast enough.  Pfizer, for example, has told Ottawa it is dramatically cutting back on the number of vaccines it will be sending us.  But the European Union countries won’t be facing any delay at all.  None.

Like Lilley, I wrote about how poorly the Trudeau regime has done in acquiring potentially life-saving vaccines.  I also quoted what the likes of the Washington Post has said about Canada’s vaccine performance: “Canada has lagged behind the United States, Britain, Israel and others in getting shots into arms.”

And: Canada’s rollout has been “slow and chaotic.”

And: In Canada, “joy and relief have given way to exasperation.”

When this writer reported on what was said about the Trudeau government by the Washington Post – no raving, ranting Right-wing rag, last time we checked – Liberal MP Adam Vaughan went bananas.

Vaughan tweeted that I was “alt-Right.”

For the purposes of clarification, the Merriam-Webster people define “alt-Right” as those who “espouse extremist beliefs and policies typically centered on ideas of white nationalism.”

Having spent more than three decades exposing and opposing the neo-Nazis, white supremacists and Hitler freaks who comprise the alt-Right – and having received no shortage of death threats for same – Adam Vaughan’s insult was a bit of a surprise.  My daughter, who is Indigenous, certainly thought so, too.

After briefly conferring with David Shiller, one of Canada’s best libel lawyers, a polite note was sent to Vaughan, and – poof! – his alt-Right tweet swiftly disappeared into an alt-dumpster.  Vaughan posted a new tweet, proclaiming that he shouldn’t have ever, ever, ever associated Yours Truly “in any way” with the alt-Right.  “I thank Warren for making it clear where he stands,” Vaughan chirped.

Now, one shouldn’t make too much of stupid Adam Vaughan tweets.  Vaughan makes a lot of them.  You could fill several Hansard volumes with the tweets he’s had to walk back.

But what is revealing, here, is what it reveals: Trudeau’s Liberals are clearly deeply, profoundly nervous (caucus members have privately said as much).  They know that they are vulnerable on vaccines.  If the perception grows that they have botched vaccine acquisition – because they have – they are toast.  They are done like dinner.

[Kinsella has chaired war rooms for federal and provincial Liberals since 1993.]