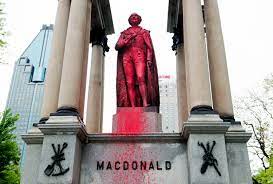 My latest: when it comes to dead children, a tweet isn’t enough

They define that as “the practice of supporting a political or social cause by means such as social media or online petitions, characterized as involving very little effort or commitment.”

Or they offer up thoughts and prayers. Or they fly a flag at half-mast. Or they put some kids’ shoes on their front step.

And sometimes (perhaps) it is enough. Or (at least) it’s better than nothing. Depends on the subject matter.

But when the subject matter is hundreds of dead babies and children, dumped behind a building like they were trash, I’m sorry: A well-meaning tweet or a “215” graphic on Facebook simply isn’t going to cut it. It’s not enough.

Now, I know what you’re going to say: ‘I’m just a regular citizen. I’m just Joe or Jane Frontporch. I have no power like the politicians, or the media do. What can I do?’

Well, for starters, you shouldn’t do what the politicians are now doing, which is nothing. Which is the same damn thing they always do: Thoughts and prayers, sturm und drang.

Press releases no one reads, promises of more Royal Commissions that accomplish nothing, bilingual tweets no one remembers. (In either official language.)

That’s slacktivism. That’s giving the illusion of doing something that is really nothing. I detest that, personally. I’ll bet you do, too.

I also detest it when people try to fit their narratives into a larger narrative. But hear me out: I actually come to this story with legitimate connections.

One, my daughter. She’s Indigenous. We adopted her when she was one day old. She changed my life.

Two, Sir John A. Macdonald. He changed Indigenous lives, too.

He was the monster who came up with the residential school system — the system where it became acceptable to drop babies in unmarked graves. After they had been stolen from their parents, and abused, and destroyed.

And, in some cases, killed. Obviously killed. (Why else hide their deaths from the world?)

“Sir” John A. Macdonald was a young lawyer in Prince Edward County, where I live. I literally live in the area’s old general store and post office, and Macdonald used to come here to get his mail.

And he called people like my daughter “savages,” many times. He called for more “Aryan culture” in Canada. And he acted on those words.

So, what can we do, so long after the fact, you ask? Fair question.

Just this week, the Americans are dealing with a similar act of evil: One hundred years ago this month, a white mob attacked the predominantly black district of Greenwood, in Tulsa, Okla. The mob killed at least 300 African American men, women and children, and they burned 35 square blocks to the ground.

And they did all that, as with Canada’s residential schools, with official sanction. Some had even been made deputies.

So, what are the Americans doing about that, so long after that fact? Plenty.

There’s a massive lawsuit, for starters, against every level of government. It demands a detailed accounting of what was lost and stolen. It calls for the building of a hospital. It calls for an ongoing fund to compensate victims — survivors and descendants. It calls for a tax break for victims until restitution is paid.

That’s not a tweet or a Facebook meme: That’s real, meaningful, concrete action. It’s something that you don’t need to be powerful to do — it in fact is specifically designed to empower the powerless.

So I ask you: Someone wants to take your babies and children away from you, never to be seen again. To steal their language, and their culture, and their lives. What would you do?

You’d do a hell of a lot more than some slacktivism. I know that — you know that.