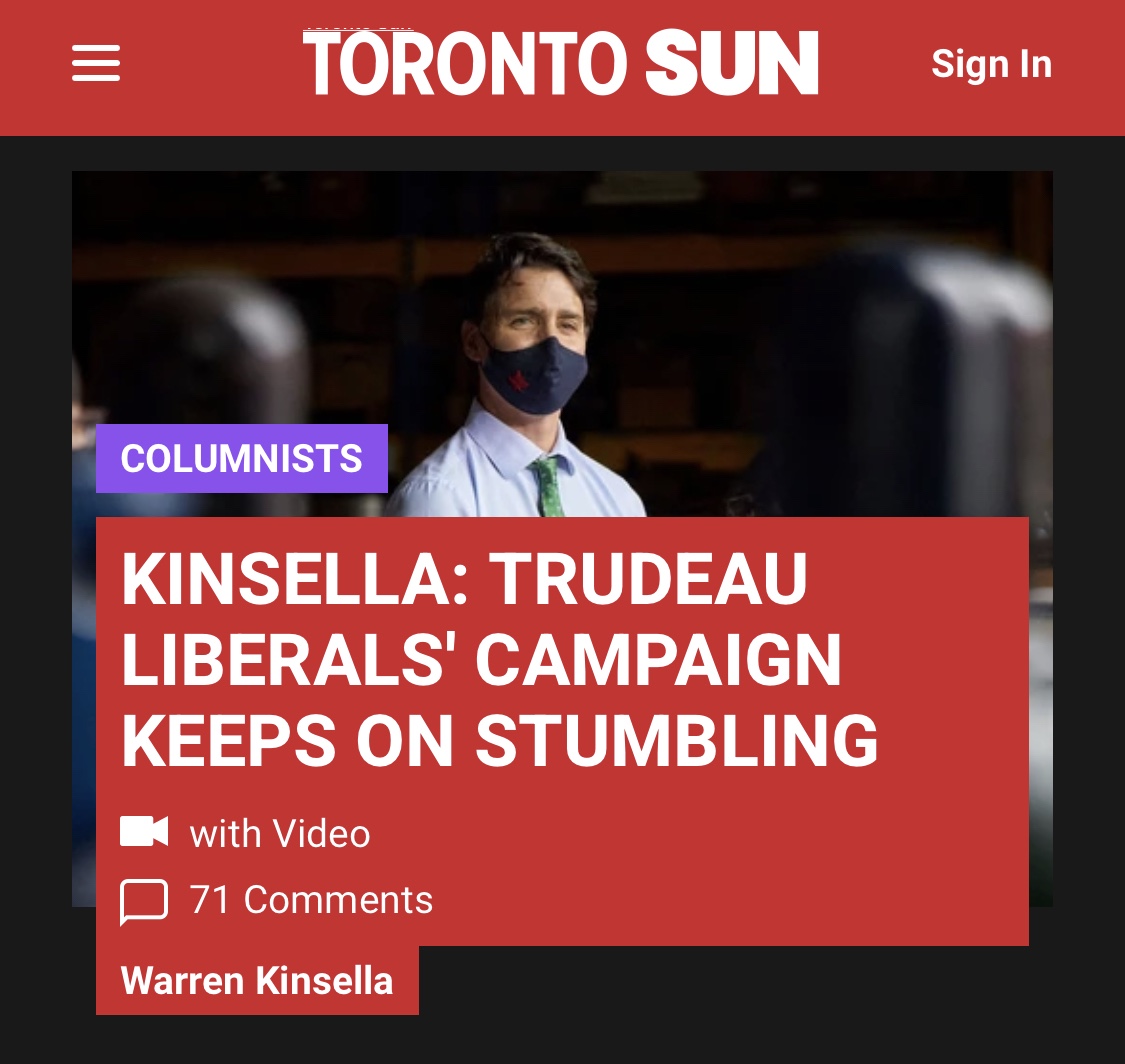 For Justin Trudeau’s Liberals, week one of the campaign went really, really badly.

Here’s a roundup of the past week and a bit. When you eyeball it, you’ll understand why every published poll shows the Conservatives edging ahead.

— Aug. 25: The Liberal Party spent more than all other parties combined on Facebook ads in the first week of the campaign — but you wouldn’t be able to tell from the polling. Because the polling ain’t good. They’re losing.

— Aug. 26: Trudeau’s candidate for Trois-Rivieres wrote a column in July 2020 which criticized Trudeau’s “elastic ethics” in the wake of the WE Charity scandal. In other news, Grit candidate vetting is going swimmingly.

— Aug. 26: Our acting Chief of the Defence Staff says that Canada’s mission in Afghanistan has come to an end — even though Trudeau had said our Armed Forces would remain there until Aug. 31. Shame.

— Aug. 27: After outcry — and after a column by yours truly! — the Public Health Agency of Canada reversed its plans to postpone briefings on the fourth wave during the election campaign. The Sun gets results!

— Aug. 27: The Liberal Party’s candidate for Kildonan-St. Paul previously worked at a think tank which dismissed the stories of residential school survivors as a “myth.” Why is that person still a candidate?

— Aug. 27: Trudeau hosts a rally in Mississauga — which has media and Liberals packed in like cordwood. The attendance is well beyond Ontario’s limits on public gatherings. Trudeau shrugs when asked about it.

— Aug. 27, at the same rally in Mississauga: After attacking the Tories repeatedly for having unvaccinated candidates, Trudeau admits that not all Liberal campaigning candidates are vaccinated, either. Do as I say, not as I do, etc.

— Aug. 28: The Liberal Party’s Marco Mendicino — who should know better — declines to answer questions about visa regulations for Afghans seeking a way out of Taliban-ruled Afghanistan.

— Aug. 30: The Conservatives point out that the Trudeau Liberals voted against a bill to ban foreign purchases of homes. Which the Grits now favour.

— Aug.  30: According to polling from Angus Reid, the number of Canadians who view Canada’s efforts to rescue Afghan nationals as a success “hovers near zero.” It could actually be less than zero.

— Aug. 30: Asked about his party’s process for handling sexual misconduct allegations, Trudeau reminds reporters that “every situation is different.” Which is basically what he also said when a reporter claimed Trudeau had groped her.

— Aug. 30: Trudeau called the election pivotal. But not so pivotal that he has a platform to show Canadians.

— Aug. 30: According to BNN Bloomberg, Canadians reported the sharpest decline in confidence since the middle of the pandemic last year. Rising inflation, the crisis in Afghanistan, and increasing COVID-19 cases are among the factors.

— Aug. 30: Real estate industry associations bash the Liberal housing platform amidst fears that it could “criminalize the way Canadians sell their homes.” Ouch!

Will week three be any better?