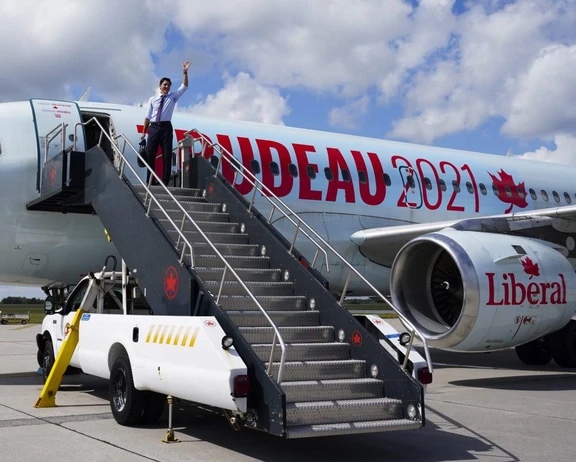 My latest: the stench of death

The stench of death.

That’s the colourful phrase some politicos use — uncharitably, but not inaccurately — to describe a campaign in its death throes.

Justin Trudeau’s campaign? It’s not in the proverbial morgue, yet. But it’s definitely lingering near the Intensive Care Unit.

How can you tell if a political party’s election campaign is dying?

Well, there’s the big things, like when a Trudeau cabinet minister calls the Taliban — who literally killed 158 Canadians — “our brothers.”

You know, the Taliban: the actual terrorist organization that subjugates, enslaves and rapes women.

For the Trudeau Liberals, that represented a really, really bad day on the campaign trail.

Whatever else they wanted to announce was blown up by Monsef’s outrageous, disgusting statement.

But that’s kind of how the Trudeau campaign has gone, this time. Something has gone wrong every single day. To wit:

• Pre-election: On August 12, Theresa Tam announced Canada was in a 4th wave of the pandemic. Trudeau went ahead with the election call anyway.
https://globalnews.ca/news/8107100/fourth-wave-covid-19-canada-dr-theresa-tam/

• August 15: Trudeau calls election just  as Kabul falls to the Taliban. Any other Prime Minister would’ve waited. Not Trudeau: he wants his majority, and to Hell with the consequences.
https://www.washingtonpost.com/video/world/trudeau-announces-withdrawal-of-canadian-diplomats-from-afghanistan/2021/08/15/9f2cdad5-f648-44a0-823d-db35d0276dc0_video.html

• August 16: Trudeau and Global Affairs minister Marc Garneau refuses to say if Canada will recognize the Taliban as a government.  Wouldn’t that have been the, um, brotherly thing to do?
https://torontosun.com/opinion/columnists/lilley-otoole-wont-recognize-taliban-government-trudeau-says-lets-wait-and-see

• August 16: The federal Public Service Union opposes Trudeau’s vaccine mandate for federal employees. Trudeau can’t say if or how it would be enforced.  Oops.
https://calgaryherald.com/opinion/columnists/corbella-trudeau-falls-into-his-own-forced-vaccination-trap-that-he-set-for-otoole

• August 18: Maryam “Taliban Brothers” Monsef posts a Twitter thread accusing O’Toole of being anti-abortion. He isn’t.  But the Trudeau campaign won’t ever let the facts get in the way of the daily smear. Onward and downward.
https://twitter.com/MaryamMonsef/status/1428121957308981249?s=20

• August 20: Canada evacuates 198 people from Afghanistan — while the Americans evacuate 823 on the same kind of plane. Canadian officials fret about seatbelts. Seriously.
https://twitter.com/MercedesGlobal/status/1428750432533368842?s=20

• August 20: Trudeau blames Afghan refugees for being unable to get to the Kabul airport. That’s right: he blames The very people he had previously promised to help.
https://nationalpost.com/opinion/rupa-subramanya-trudeau-blames-afghans-for-not-getting-to-the-airport-fast-enough https://www.youtube.com/embed/u9SBTcejXNA?embed_config={%27relatedChannels%27:%20[],%27autonav%27:true}&autoplay=0&playsinline=1&enablejsapi=1

• August 21: Trudeau minister Mary Ng releases a letter asking O’Toole if he will prohibit his caucus from proposing legislation which bans mandatory vaccinations — when Trudeau himself said for months that he was against mandating vaccinations.
https://twitter.com/mary_ng/status/1429118478192087049?s=20

• August 22: Deputy Prime Minister Chrystia Freeland releases a video of O’Toole  which Twitter says has been manipulated.  Like they used to do for Donald Trump.
https://www.cbc.ca/news/politics/twitter-labels-freeland-tweet-manipulated-media-1.6149734

• August 24: Trudeau threatens a clawback of Saskatchewan health transfers – despite the fact that Quebec has the very same health care approach as Saskatchewan.
https://twitter.com/punditclass/status/1430197147303956482?s=20

Which brings us to Wednesday, the day the Trudeau government declared that the Taliban terrorist organization were “our brothers.“

Is the Trudeau campaign dead? Not yet, but based upon all available evidence, rumours of its impending death are not exaggerated.