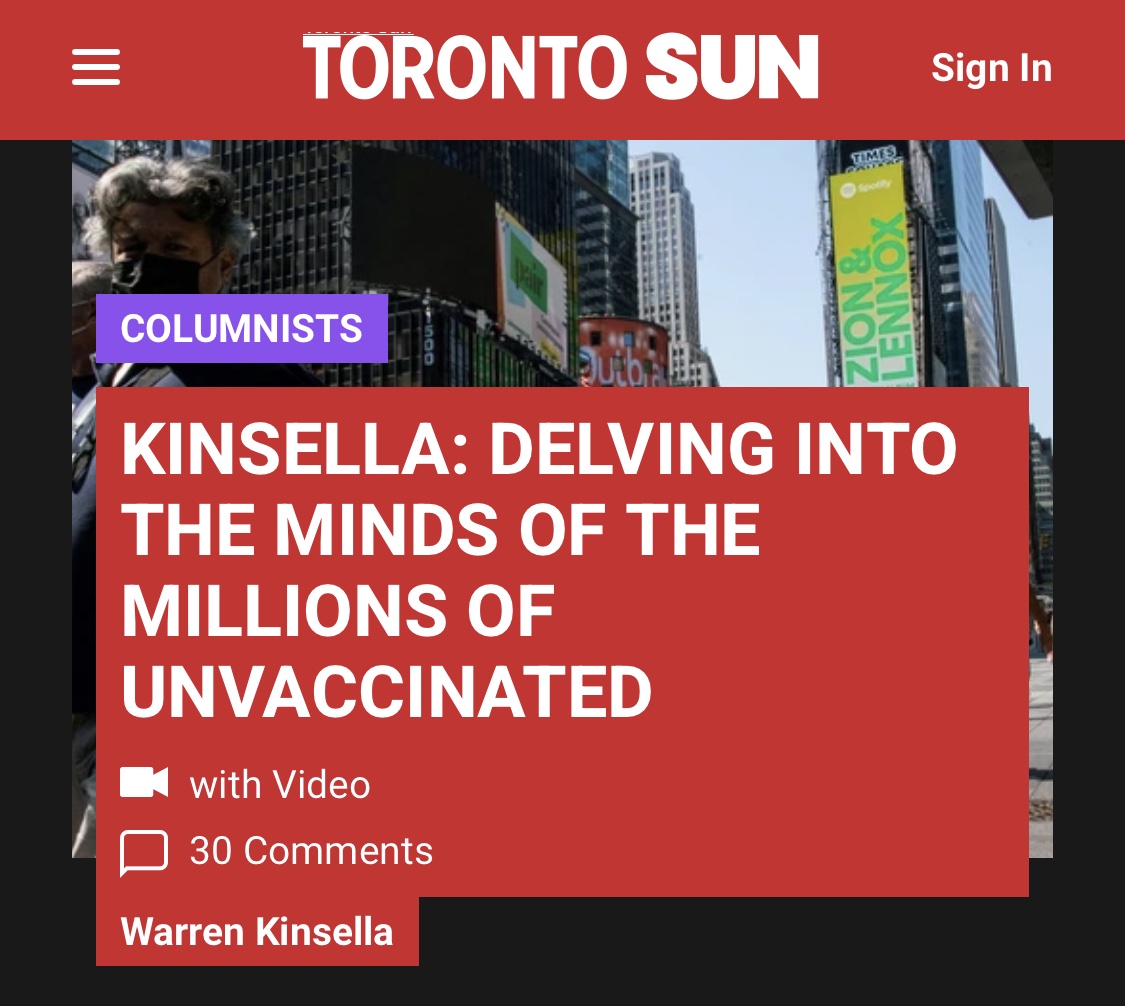 My latest: to vaccinate or not?

With all apologies due to Shakespeare and Hamlet, that isn’t the question. Or it shouldn’t be.

Getting vaccinated — so, you know, you don’t get really sick or die, and/or so you don’t leave someone else sick or dying — shouldn’t be complicated. It should be easy.

The New York Times fronted a story about what it called “the unvaccinated” in Sunday’s paper. Above the fold, colour graphics, across three columns. Four bylines. Big story.

According to the Times, some 93 million Americans are unvaccinated. Given the fact that the satanic delta variant is rampaging across the U.S., sickening and killing those 93 million holdouts, the Times set out to answer the question: Why?

The 93 million aren’t a monolith. They are actually two groups in one.

One group, unsurprisingly, are unrelenting in their opposition to vaccines. They are, the Times wrote, “disproportionately white, rural, evangelical Christian and politically conservative.”

Their opposition to vaccines isn’t about the vaccines per se. This constituency are against pretty much anything that is authored by government: Fluoridation, the metric system, bilingualism, seat belts, speed limits, you name it.

But there’s another group who are not so easily dismissed by the elites as backward, backwoods mouth-breathers. This second group, surprise surprise, “tend to be a more diverse and urban group, including many younger people, Black and Latino Americans, and Democrats.”

This “diverse and urban” group aren’t as hardcore in their opposition. They aren’t saying “never” as much as “not yet.”

They have put off getting vaccinated or are waiting for more information. But therein lies a problem: The information they are getting is often bad.

Up here in the Great White North, too, government pandemic communications have ranged from incoherent to incomprehensible.

Remember our erstwhile federal minister of health demanding that we don’t wear masks? And then flip-flopping and insisting that we do? Or her insinuation that anyone who wanted to close our borders was a crypto-racist, and then reversing herself on that, too?

With our leaders and experts so often publicly contradicting each other — and themselves — it should surprise no one that enthusiasm for getting a potentially life-saving jab would drop precipitously. Millions lack confidence in vaccines simply because they have lost confidence in the very governments who are pushing vaccines.

So, governments have tried all manner of tricks to encourage vaccination: Advertising, lotteries and tickets to special events. But millions of holdouts remain unconvinced and are still holding out.

Plenty of other factors have contributed to our collective failure to achieve the elusive herd immunity. Geography, education, fear of deportation and lack of access to regular health care are all in the mix, too.

But conspiracy theories — as dark and despicable and dishonest as they are — have had an enormous impact on the attitudes of the unvaccinated. They’re everywhere, oozing up through dark corners on the Internet, persuading millions to take the risk of getting sick — or worse.

The conspiracy theories are myriad: That governments can track those who get a shot. That enough metal is being injected to make magnets stick to you. That they will make you infertile. That the U.S. government created COVID-19 as a “bio-weapon” to reduce their own population and defeat Donald Trump (seriously).

In Canada, we are finally doing better than the States in getting people fully vaccinated. But nearly 20% of Canadians still refuse to get a shot.

To vaccinate, or not to vaccinate? For millions, that remains a question, sure. But the answer is equally clear.