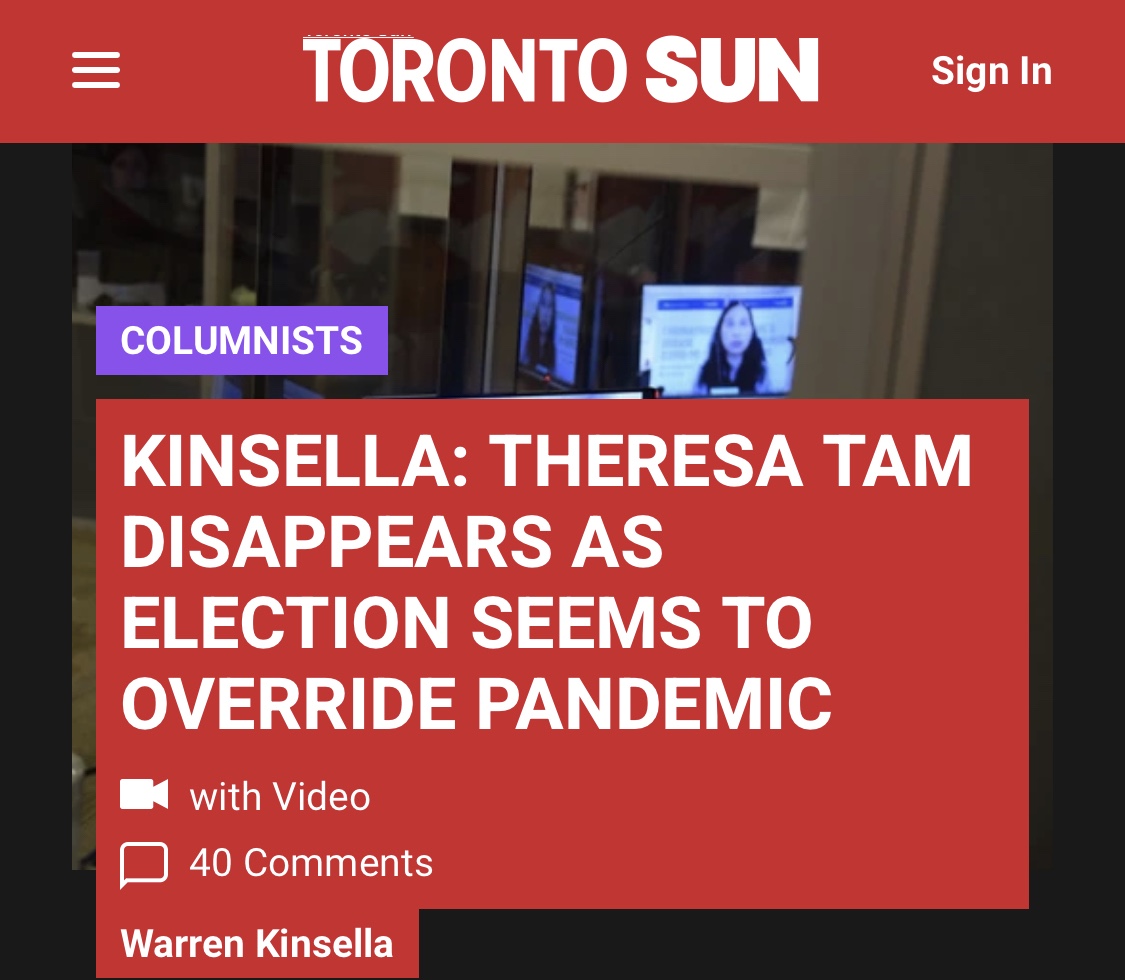 It’s kind of like that popular Where’s Waldo book series, isn’t it? Someone is supposed to be somewhere, except you can’t find them. They’re hiding.

Theresa Tam, as is very well known, is the Chief Public Health Officer of Canada. But where she has gone? That’s not so well known.

Because Tam has been ubiquitous throughout the COVID-19 pandemic, hasn’t she? Every single day, just about, she has appeared in the media, providing information.

Often, the information has been dramatically, wildly wrong. A sampling:

Seriously, she said all those things. And, yes, she’s a doctor and all that.

Now, you might wondering — and no one would blame you for doing so — if it’s possibly a good thing that Dr. Theresa Tam has gone Bermuda Triangle on us.

I mean, with the stuff she’s said, it’s probably better to get medical advice from one of the many epidemiological Nobel laureates found on Twitter, all of whom have pictures of kittens instead of their faces.

But, no. Tam has a job to do. It’s even in legislation. And, you know, the pandemic. It’s still going on. (It’s getting worse again, in fact.)

The statute that governs Tam’s shop is unimaginatively called the Public Health Agency of Canada Act. It has a couple interesting parts to it.

Here’s one, from the preamble: “The Government of Canada considers that the creation of a public health agency for Canada and the appointment of a Chief Public Health Officer will contribute to federal efforts to identify and reduce public health risk factors and to support national readiness for public health threats.”

See that? No less than the government itself says that Tam’s job is to “identify and reduce public health risk factors” and ensure there is “national readiness” for things like COVID-19.

There’s more. Section 7 of the Act says Tam is expected to “communicate with the public … for the purpose of providing information about public health issues.”

That’s Tam’s job. That’s what she was hired to do. But since the election began, Dr. Theresa Tam hasn’t really been doing her job, has she?

Oh, sure, she has a Twitter account, almost certainly maintained by a minion, in both official languages. But during the election? Press conference? Answering questions about the surge in infections?

People have noticed. The Conservative Party has written to the head of Canada’s public service, demanding an investigation — a search party, sort of — into Tam’s whereabouts.

And Conservative Leader Erin O’Toole — who now has a better shot at becoming Tam’s boss than any of us expected — says this: “Has (Justin Trudeau) silenced the public health authority from giving public updates? That’s a question for Mr. Trudeau.”

It sure is. NDP Leader Jagmeet Singh was much more direct, and said this to another newspaper: “I mean, if we needed another reminder why this was a bad decision of Justin Trudeau to call the election, there’s another example. We’re still dealing with this pandemic, still dealing with a crisis. And we’re not able to get briefings of that nature because we’re in a caretaker mode.”

Actually, we’re in Where’s Waldo mode. So what does Trudeau say?

If all of this reminds you of what Donald Trump did to Dr. Anthony Fauci, silencing America’s Chief Medical Advisor during the early days of the pandemic, you’re not alone. Lots of us have thought the same thing.

Like Trump, Trudeau doesn’t want his sunny days clouded with unhelpful talk about the rampaging Delta variant or Canadians gasping for air in ICUs. So, Tam — like Fauci — disappears. Poof.

With one critical difference. Fauci didn’t want to be silenced. Tam? We’re not so sure.

Here’s the thing, Dr. Tam: You were hired to do one job. You’re paid a quarter of a million dollars, annually, to — as the law says — “communicate with the public.” The law doesn’t give you time off for elections.

You work for us, not the Liberal Party.