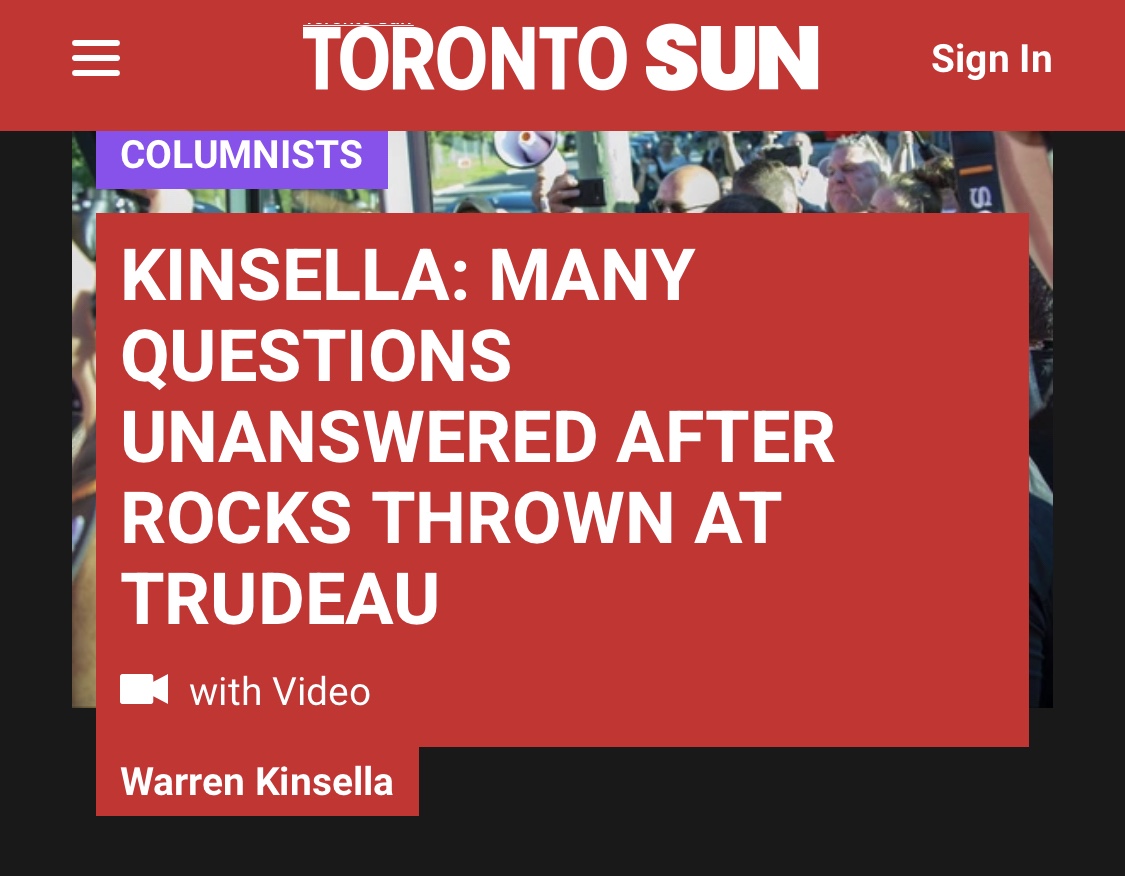 My latest: how to deal with protestors

Jean Chretien tells the tale: “There was a bunch of young kids in front of me. I was signing autographs. The kids were there with Canadian flags, and they asked me to autograph their flags. So that’s why the (RCMP) bodyguards were behind me at that particular moment, to permit me to have access to the kids.”

“(After the speeches and autographs,) I was going back to my car, and these two guys rush towards me, shouting. One had a steel bullhorn. He was screaming things, it was not highly complimentary. So when the first one arrived, I grabbed him by the neck and flipped him over. But the press didn’t ever report that, with the other guy — the one with the steel bullhorn. I pushed down the bullhorn, too, right after I flipped the first guy over. Then an RCMP guy flipped the (bullhorn-waving protester) over.”

He pauses, and shrugs. “I had to grab the guy by the neck and flip him. So I did.”

And so, the Shawinigan Handshake was born.

Chretien went home, wondering if his wife would be mad at him (she was). An aide called. The aide said a Toronto radio station had conducted a quick survey about the Flag Day fracas. Fearing the worst, Chretien preferred to put it off: “I said to him, ‘Don’t tell me give me the results until I’m back at work on Monday.’”

The aide replied: “Mr. Prime Minister, we won’t tell you on Monday, in any event.”

“If we tell you,” answered the press secretary, “we’re afraid you will go out and grab another protester by the neck. It’s gotten an 85% approval rating!”

Monday in London, Ont., for example. Another prime minister, Justin Trudeau, was leaving a Liberal campaign event at a brewery. A mob of angry protesters — many clutching home-made signs, but many more clutching People’s Party of Canada signs — surrounded Trudeau’s bus.

As Trudeau stepped onto the bus, a phalanx of nervous-looking RCMP officers surrounding him, a shower of rocks and gravel rained down — on media, on police, on protesters. It’s unknown if Trudeau himself was hit (asked later by a reporter, Trudeau wouldn’t say).

A video posted to Twitter showed a single protester by the bus — one alleged to be a People’s Party organizer and white supremacist by the Canadian Anti-Hate Network — leaning down to scoop up rocks. And then rocks rained down near Trudeau and others.

Whether Trudeau was hit or not, whether another political party was involved or not, the event was serious. Someone could have been hurt, perhaps badly. And many questions remained unanswered, among them:

Many questions, too few answers.

One thing is for certain: If Jean Chretien was still running things, the rock-throwing protester could count on one thing.

He wouldn’t ever get a chance to do the same thing twice.