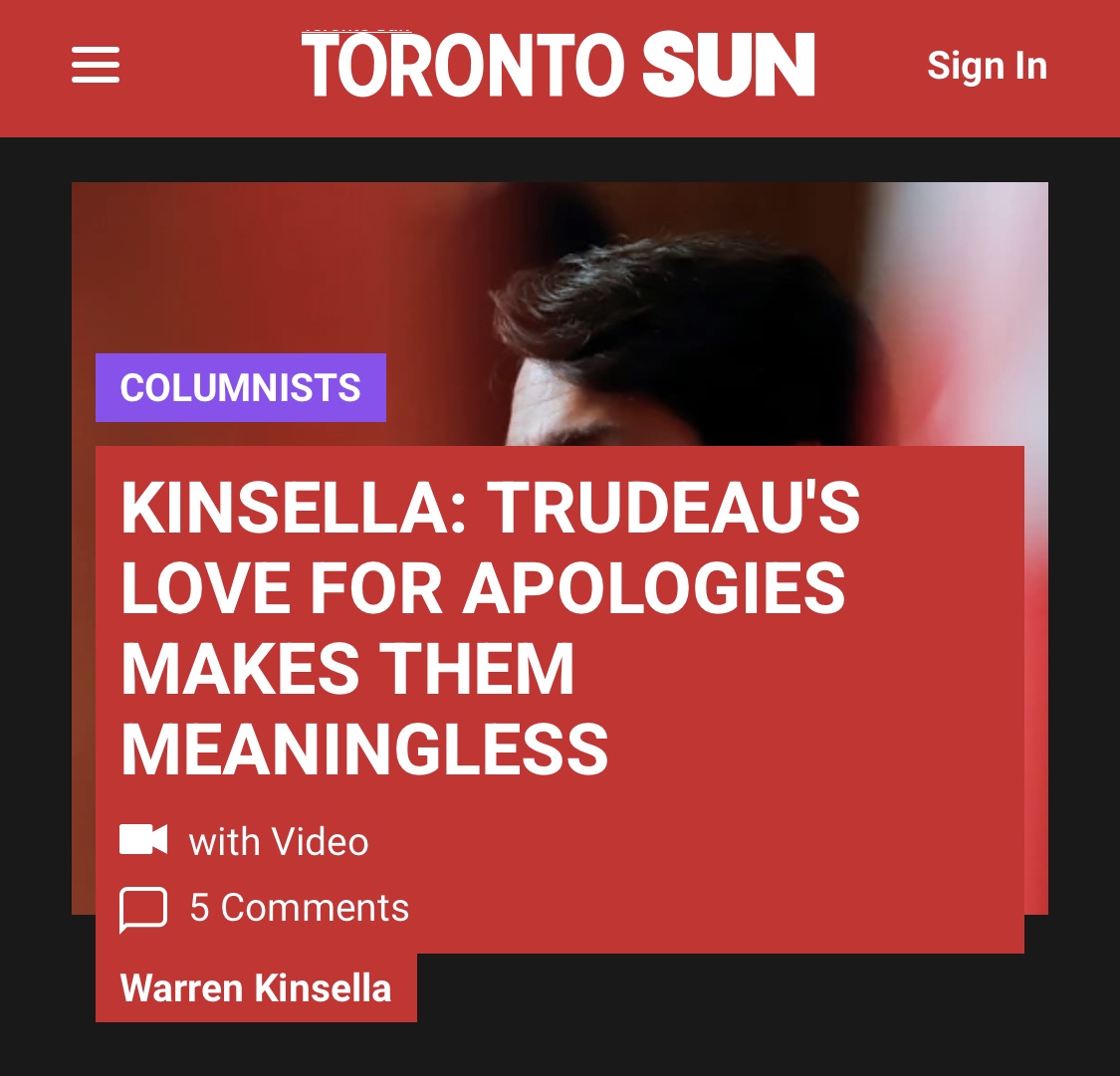 My latest: shove your apology, Trudeau

Sorry, but Justin Trudeau likes apologies. He does.

He makes them all the time. Everyone has noticed. The BBC even published a story about The Apologist-In-Chief, asking: “Does Justin Trudeau apologise too much?”

Their answer: Yes, probably. (And, yes, they spelled “apologize” in the Brit way, naturally, with an “s” and not a “z.” Apologies.)

Here’s a partial list of Justin’s apologies. It’s partial, because we literally do not have enough room to publish all of the details about the Liberal leader’s apologies. We’re a tabloid, not an encyclopedia. (Sorry.)

— When Trudeau and his family were caught with their snout deep in the WE Charity trough, Trudeau apologized. “I made a mistake in not recusing myself immediately from the discussions given our family’s history and I’m sincerely sorry about not having done that.”

— When Trudeau and his family were caught with their well-appointed beaks in another trough — the Aga Khan’s lobbyist trough — he was again super contrite for not getting permission from the ethics czar first. “I’m sorry I didn’t, and in the future I will be clearing all my family vacations with the commissioner.”

— When Trudeau and his family were caught lying on the first National Day of Truth and Reconciliation — lying about where they were, lying about what they were doing, and lying about where they were doing it (an $18-million oceanfront mansion owned by the wife of one of the alleged tax avoiders identified on the Paradise Papers this week, according to the Journal de Montreal) — he again issued another post facto Act of Contrition: “Travelling on September 30th was a mistake, and I regret it.” He didn’t utter the word “apologize,” notably, but he claimed to have done so in a call with an Indigenous leader: “I apologized for not being there with her and her community for (Truth and Reconciliation) day.”

Do you see the oily, serpentine thread that weaves through all of Trudeau’s dewey-eyed, butter-wouldn’t-melt apologies? Yes: They all involve his family. You know: his multimillionaire family, who rarely seem to resist the temptation to plunder the treasury, or someone else’s bank account. About which Prime Minister Penitential then apologizes — always after getting caught. Never before.

But like we say: Justin Trudeau loves apologies. They turn him on. There was his apology for the Komagata Maru incident, wherein a ship full of mostly Sikhs were turned away from Canada about 100 years ago. Then there was the one he made for elbowing NDP MP Ruth-Ellen Brosseau in her chest during a nasty debate in the House of Commons in 2016.

Then there was the one he made for residential school survivors in Newfoundland and Labrador in November 2017. Four days later, he made another one to LGBT people for what he called “state-sponsored, systematic oppression.”

He apologized to the Tsilhqot’in First Nation for the killings of their chiefs in 1864. In that same year, 2018, he apologized because his Liberal predecessor, Mackenzie King, turned away 900 Jews on the MS St. Louis in 1939, most of whom would go on to be murdered in Nazi death camps.

And so on, and so on. Apologies followed to the Inuit, to the Poundmaker Cree Nation, and on and on. And now, because he made the first Truth and Reconciliation Day a farce, a bad memory.

Here’s the best response to your fetish for apologies that are never, ever, ever accompanied by changes in your behaviour, Justin Trudeau. It comes from Assembly of First Nations National Chief RoseAnne Archibald.

“Hollow apologies will no longer be accepted,” Archibald said. “As national chief, on behalf of all First Nations, I expect concrete action and changed behaviours.”

There you go, Justin Trudeau: Take your apologies and shove them.