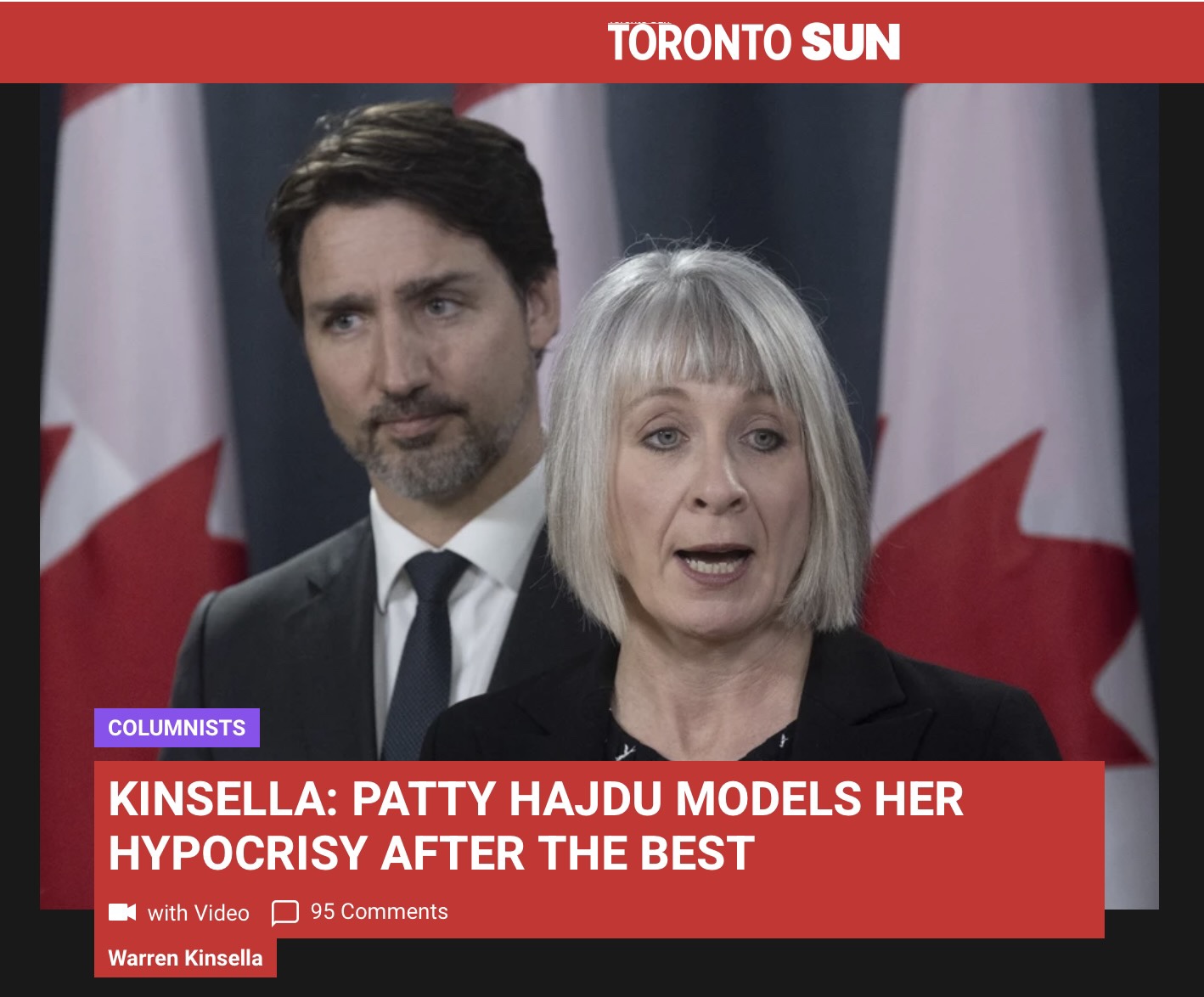 My latest: The Hypocrites

Calling somebody a hypocrite isn’t anything new. In politics, just about anywhere, hypocrisy is the coin of the realm. Everyone in public life seems to practice it.

But the regime of Justin Trudeau is a special case, isn’t it? They have taken hypocrisy to an entirely new level.

They have reached hypocritical heights that have heretofore never been reached. They are in the actual pantheon of hypocrites, for eternity.

I don’t mean to pick on her, even though God knows she deserves it. But Justin Trudeau’s minister of health, Patty Hajdu, is the most recent and most notorious example of a Trudeau cabinet minister who is unashamedly, undeniably hypocritical. It is almost like she relishes it. That it is part of her job description.

Some time ago, she lectured Canadians about wearing masks during the pandemic. Shortly thereafter, she was photographed laughing in a private airport lounge. Maskless.

She extolled the virtues of social distancing, and insisted that Canadians do likewise. She was then seen in the aforementioned private airport lounge, giggling close-up with other well-to-do executive types.

Most recently, following an unwanted and unnecessary election — in which her boss travelled nonstop for more than a month — she demanded that Canadians not travel themselves. With a straight face. She did that.

Do one thing, say another. Talk the talk, but never walk the talk. Preach something, practice something else.

That is what Patty Hajdu does, during the biggest public health crisis Canada has faced in a century. At precisely the moment when it was critical that Canadians receive clear, factual and persuasive health information from their federal minister of health, we were given a former graphic designer who is both incoherent and incompetent.

We were given Patty Hajdu who — over and over and over – says one thing and does another. Who is a hypocrite of the highest order.

But can we really blame her? Can we really get angry with Patty Hajdu, when we consider who her boss is?

Justin Trudeau, who repeatedly proclaimed that he was a feminist, and who covered up the fact that he had been accused of groping a female reporter?

Justin Trudeau, who, when he became Liberal leader in 2013, solemnly pledged to lead an ethical government — and then would go on to become the first sitting prime minister to be found guilty of violating federal ethics laws not once, but twice?

Justin Trudeau, who called for reconciliation with Indigenous people — and then defamed and exiled a proud Indigenous leader, Jody Wilson-Raybould, who refused to obstruct justice for a donor to Trudeau’s party?

Who promised to end boil water advisories for Indigenous people — and has done nothing of the sort? Who promised to clean up environmental disasters in Indigenous communities — and who then mocked a woman who drew attention to mercury poisoning at the Grassy Narrows reserve?

So, in a sad and pathetic way, it’s kind of hard to get mad at Patty Hajdu. She is simply following the example that has been set, over and over, by her boss. By Justin Trudeau.

Like you, I despise hypocrites. But unlike you, perhaps, I’ve spent a lot of time working in politics. So I’ve learned to accept that politics often attracts people who are rank hypocrites.

But I swear to God: Justin Trudeau and Patty Hajdu and their ilk are the biggest bunch of hypocrites I’ve ever seen. Ever.

And by voting for them, in 2019 and 2021, too many Canadians are saying that they are OK with hypocrisy.

And that is the worst, and most hypocritical, thing of all.