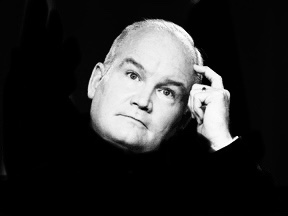 With thousands of British Columbians facing dangerous flooding, inflation soaring to 20-year highs, and the virus surging again, it’s comforting to know that the Conservative Party of Canada is focused on the timing of a leadership review.

They’d rather talk about themselves. Not you, Canada.

It’s nothing new, but it’s still plenty weird. They’re the only credible alternative to the worst prime minister in a century. They held him to a minority government, twice, when it looked certain he’d do much better. They have representation in every region and every province.

But their eyes are trained, laser-like, on their own navels.

There they were, again, this week. A Conservative senator from Saskatchewan, Denise Batters, announced the launch of a slick online petition to ditch her leader, Erin O’Toole.

This writer has gotten to know Batters over the past couple years, and can attest to the fact that she is no bloodthirsty Paul Martin-style mutineer. She’s a sensitive and thoughtful person, and therefore harder for Team O’Toole to demonize.

And she’s a fan of irony. “Mr. O’Toole flip-flopped on policies core to our party within the same week, the same day, and even within the same sentence. The members didn’t have a say on that, but we must have one on his leadership,” Batters declared in a statement she released to the media.

This is where the irony part comes in. Said the good senator: “We can’t afford to see our party ripped apart again. When we’re divided, the Liberals win.”

Except, um, publicly calling for your party’s leader to be fired is the dictionary definition of “divided.” That’s what “ripping part” literally is.

Look, this space carries no brief for Ever O’Terrible. He’s remarkably unremarkable, and he prefers to have multiple positions on single issues — carbon taxes, assault weapons, vaccinating his candidates, you name it. The federal Conservative leader is the Chinese food buffet of Canadian politics — an hour after trying him out, you’re feeling hungry again.

But declaring a Tory civil war, right now, is a really bad idea. Three reasons. First, as noted above, it’s a minority Parliament. With the able assistance of The Prime Minister Without A Portfolio, Jagmeet Singh, Justin Trudeau could engineer an election in a snap.

Secondly, as was also noted above, there’s more pressing issues to be pressed. I mean, Senator Batters, have you looked at the footage of what B.C. is experiencing this week? At all?

Thirdly, we in the media positively love every skirmish in every civil war, because if something bleeds, it leads, etc. Writing about political fratricide is a lot more fun than writing about boring old policy stuff.

But you won’t like the result, Team Tory. This writer was a frontline warrior in the Jean Chretien-Paul Martin wars, which went on for years. I personally had a lot of fun, because I’m a walking Irish pub fight. But did anyone else win?

The Liberal Party of Canada sure didn’t. For the political sin of washing its dirty laundry in public, the public put the Grits in the penalty box for a decade.

Will the Conservatives listen to me? Of course not. Nobody listens to me.

Even so, you’d be well-advised to exercise extreme caution, Senator Batters et al. Wars are easy to start.

They’re not ever easy to stop.