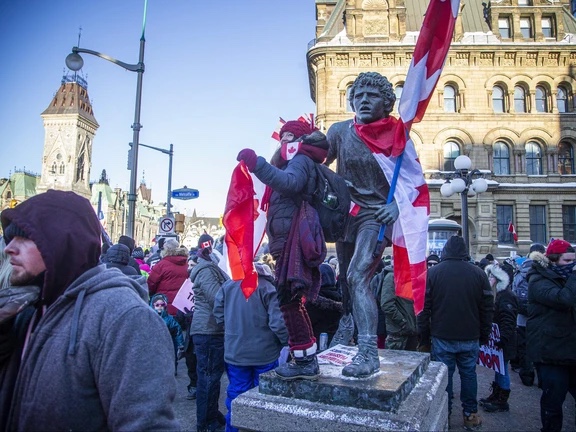 Let’s do a recap, shall we?

People partying on the Tomb of the Unknown Soldier.

People breaking into the Shepherds of Good Hope to take food that was being prepared for poor people.

People threatening teenagers at fast food places because the teenagers politely asked them to wear a mask.

People parking wherever they want, and screaming at passersby, and having drinking parties around the clock.

And, of course, people displaying swastikas and Confederate flags and calls for Prime Minister Justin Trudeau to be assassinated.

That’s just some of the stuff that went on in Ottawa this weekend. That’s based on what I have seen with my own eyes, or from uncontradicted news reports by organizations like this one.

It happened. It’s real. And it’s been condemned by everyone from a Liberal prime minister to a Progressive Conservative Ontario premier.

Oh, by the by, don’t start telling us in the media how to do our damn job. Our job is not to provide sunny ways reports about the majority of people at the protest obeying the law.

That’s not news. People are supposed to obey the law. Obeying the law and acting like a civilized human being is not news, ever.

But when someone holds up a Nazi flag near Parliament, and thousands of other people don’t do a damn thing about it? That’s news.

As for the suggestion that we are on the Trudeau government’s payroll? That’s more than laughable. That’s a lie of Nazi-like proportions, frankly. A big one.

This newspaper has relentlessly documented the failings of Justin Trudeau‘s government. And this writer, to be blunt, does more to bring about the end of the Trudeau government — in a single afternoon — than most of you would do in 10 lifetimes.

So, take some responsibility, folks. If you were there, or you supported those who were there — and if you are in any way honest — you know that this weekend looked really, really ugly to a lot of regular, unaffiliated voters. Normal people. Not just so-called Lefties.

Now, most of the protesters were not there because of vaccines. They were there to oppose Justin Trudeau‘s government. That’s fine. I oppose it, too.

But here’s the problem, Trudeau critics: The people you have now alienated are the people you needed to reach.

Since you are not going to dethrone him with some nutbar manifesto removing all elected Members of Parliament, and then creating a whackadoodle regime where we are governed by an unelected Governor General and some unelected senators. That is crazy. It is insane.

No, if you are going to remove Justin Trudeau, you needed to reach other voters, folks. You need to make those voters less enthusiastic about him. In an election.

You didn’t do that, trucker fans. You did the opposite.

And, along the way, you have re-elected Justin Trudeau.