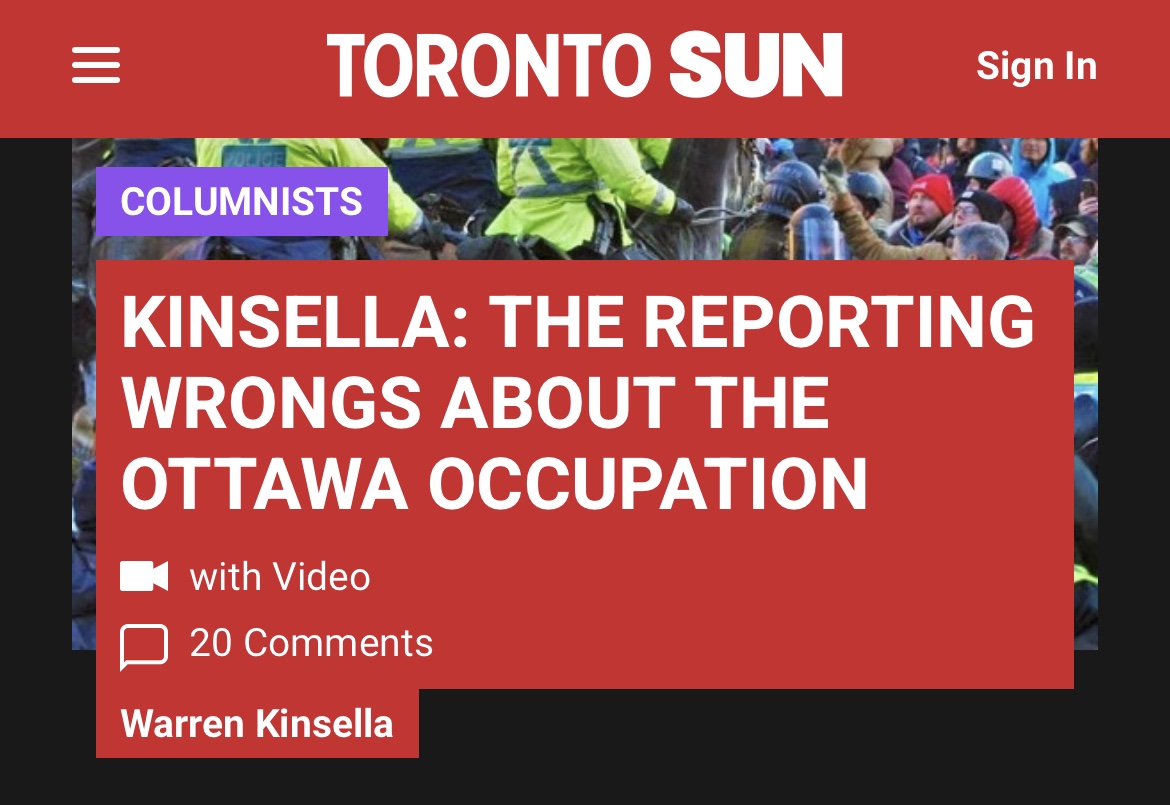 My latest: stop the media bullshit

At the risk of sounding indelicate, I had to ask: Where’s the body?

It’s an awkward question, to be sure. It makes people uncomfortable, when you demand to see human remains. But not a few folks were asking it over the weekend, just the same.

On Friday night, Fox News — and too many others — reported that an elderly female protester had been trampled to death by mounted police in Ottawa. Sara A. Carter, a longtime Fox News personality, tweeted this: “Reports are the woman trampled by a Canadian horse patrol just died at the hospital.”

Except, well, no. The woman — happily — didn’t die. No one died, in fact. (And Ontario’s Special Investigations Unit, properly, is investigating what happened to the woman.)

Carter later had to issue a complete retraction and apology. The acting chief of the Ottawa Police Service was restrained, and called the trampled-to-death report “misinformation.” The rest of us would have another name for it: Bullshit.

Last weekend, combined police forces came together, from Vancouver to the SAQ police in Quebec. They were efficient, professional and restrained. There was, as my Sun colleague Brian Lilley stated many times, no instances of police brutality. Whatsoever.

But that didn’t stop the the fibbers, fabulists and fabricators — on both sides of the ideological divide — from attempting to peddle, um, horse hooey. In Ottawa, along with protesters and trucks, there was quite a lot of horse manure to be seen. (Horses, too.)

Take (please) one of the head honchos at Rebel News, which I personally regard as neither rebels (in the traditional sense) nor news (in any sense). He tweeted this about the woman-trampled-to-death incident: “Trudeau orders mounted police to charge the crowd of unarmed civilians.”

Let’s look at that, shall we? There are big problems with it.

For starters, the two starting words are flat-out false. Prime Minister Justin Trudeau, whatever else his powers, does not have the power to “order” police to do anything. Also: The protesters were warned the horses were advancing, multiple times. If that’s a “charge,” it’s not a very good one.

And “unarmed civilians?” Really? Does that make the victim more victim-ish? Perhaps the “rebel” could have also tweeted that the woman in question — who, again, is quite alive — also goes to church every morning, and donates all of her wages to orphanages. And has a halo.

The New York Times, which is usually considered one of the best newspapers in the world (after the one you now happily grip in your hands), had this as an actual headline on page 11 of their Sunday edition: “Police in Ottawa Arrest Truckers at Gunpoint as They Clear Downtown.”

The Times got it wildly, dramatically wrong. None of the 191 people arrested in Ottawa — not a single solitary one of them — was arrested at gunpoint. Zero, zippo, zilch.

The lede was even worse: “Canadian police officers advanced on demonstrators at gunpoint.”

Well, no. The police had guns, yes. Police usually do. But those guns were holstered. And whatever you think about the assembled anti-vaxxer folks in Ottawa — and this writer doesn’t think much of them — none of them needed to be arrested “at gunpoint.” Most went quietly.

Many inquiries and commissions are soon to take place, examining how the Ottawa occupation happened, and how to avoid it from happening again. They will go on for months and years.

— Warren Kinsella has taught media law and legal journalism at the University of Calgary and Carleton University.