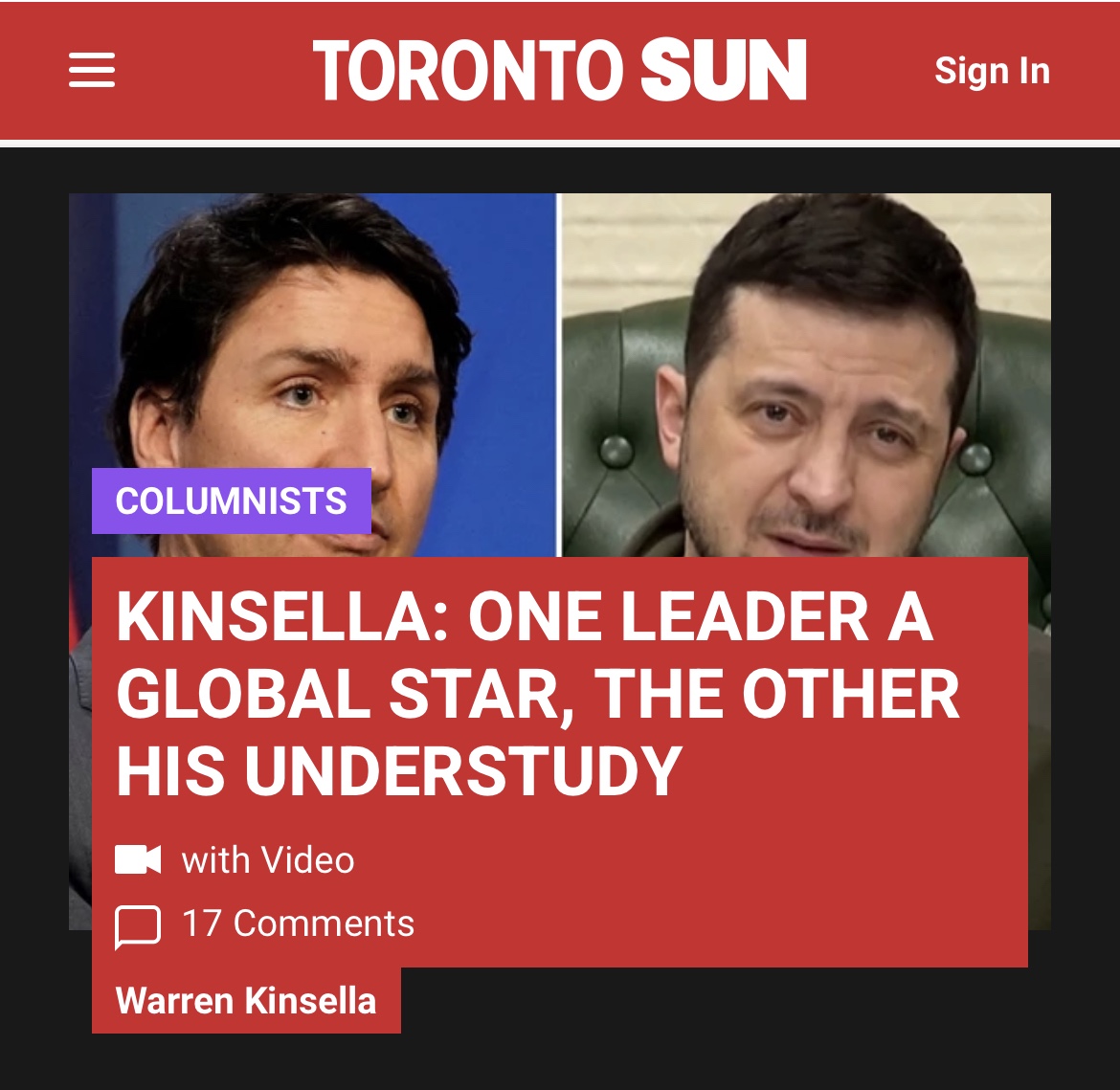 My latest: actors in politics, politicians in acting

People involved with politics make good actors, someone once said.

But do actors make for good politicians?

Yes and no. When we Canadians get asked a question like that, we immediately think about one Justin Pierre James Trudeau, PC, MP.

Canada’s prime minister did a lot acting, as the Conservative Party never tires of reminding us. And Trudeau was indeed an actor.

He even has his own IMDB page, where we are informed that Trudeau was the star of a film called — ironically, given what he and we have been preoccupied with, lately — The Great War. In that 2007 CBC mini-series, Trudeau portrayed Talbot Papineau, a soldier.

But there the similarities end. Papineau enlisted, and was killed during shelling at the Battle of Passchendaele, near Ypres, Belgium. He was a true Canadian military hero.

Trudeau never enlisted, never fought in a war, and — as most of our NATO allies now grimly note — has presided over a historic hollowing-out of the Canadian military.

Until a couple weeks ago, Trudeau wasn’t much of an actor. He was, as a female friend once observed, the national yoga instructor — all breathy and moist, all tone but never content. Stretch, Canada. Stretch.

And then, the war happened.

I believe that Trudeau, and the world, changed on the evening of Feb. 24, 2022. On that evening, a day after fascist leader Vladimir Putin invaded, Ukrainian leader Volodymyr Oleksandrovych Zelenskyy appeared before European leaders via a flickering video link.

As the Europeans sat in suits and ties in a well-appointed Brussels boardroom, Zelenskyy seemed to be in a bunker somewhere in Ukraine, wearing stubble and his ubiquitous military-green T-shirt.

“This may be the last time you see me alive,” Zelenskyy said, and renewed his plea for more weapons and sanctions.

The New York Times takes it from there: “When the leaders emerged from the room, they were visibly shaken. Some described Zelenskyy’s appearance as a catalyst and a game-changer.”

It was. Within hours, the Europeans — and the Canadians, and the Americans, and much of the world — froze the personal accounts of Putin and his cabal, and expelled Russia from the global banking system. The civilized world came together, spurred into action by the powerful words of one man.

Was Zelenskyy’s appearance a performance? An act? Perhaps. Maybe. Like Trudeau, he used to be an actor, something Putin’s Satanic propaganda machine never tired of reminding us. He was on the Ukrainian version of Dancing With The Stars, wearing fringe and hot pink. He was the voice of Paddington Bear, in the Ukrainian version of that children’s film. He did stand-up comedy.

And now? Well, now, Volodymyr Oleksandrovych Zelenskyy isn’t just the leader of Ukraine. He is the leader of the free world, basically. With his for-the-ages refusal to leave his homeland — “I don’t need a ride, I need more ammunition,” he told the Americans who offered him safe passage out of Ukraine — he has won the hearts and minds of all of us who cherish democracy and decency.

Did Trudeau witness Zelenskyy’s appearance, his performance, on the night of Feb. 24? Perhaps. Maybe. He certainly would have heard all about it, by now.

And, as with so many others, I believe it has changed him. Gone is the glib, smirking yoga instructor. In its place, a serious, sober leader. For once.

Is Justin Trudeau an actor? Of course he is. So is everyone in politics.

And being an attentive understudy to Volodymyr Oleksandrovych Zelenskyy?

There are worse roles.