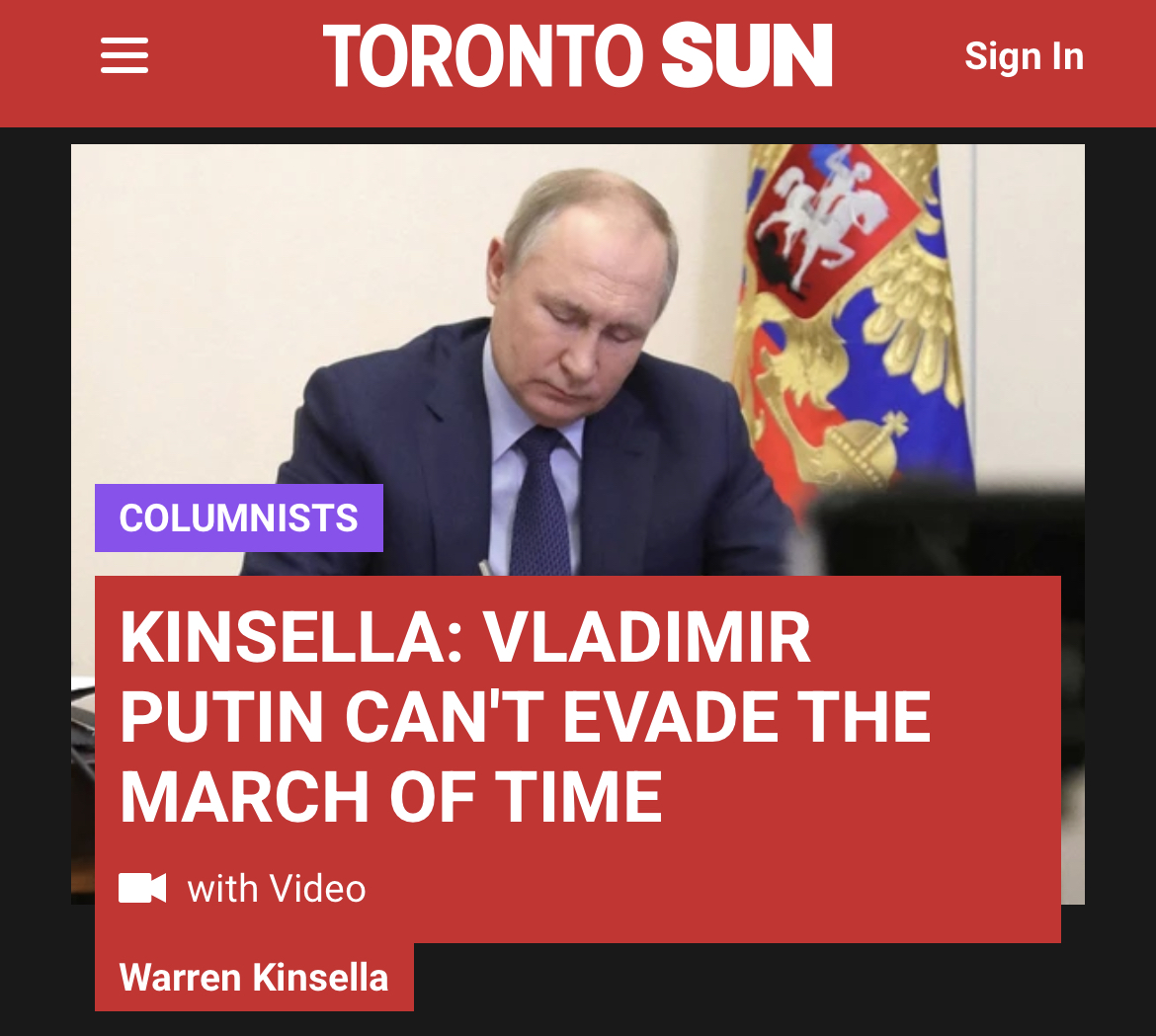 Vladimir Putin is going to be 70 years old this year.

He may be the richest man in the world. He may have super-yachts, and Swiss bank accounts containing ill-gotten billions. He may have been victorious in armed conflicts in Crimea, Syria, Belarus, Africa and Kazakhstan.

But he can’t stop the march of time, can he? He can’t outrun death.

Any of us who have hit the milestone birthdays — for punk-rocking me it was 20, seriously — know what all those birthday parties signify. They start to add up. They mean you’re getting a lot closer to the end than the start.

And, predictably, the Russian dictator has frantically attempted to forestall the end. There’s been those vaguely homoerotic airbrushed photos of him shirtless, on horseback. There’s been the staged judo competitions. There’s been the nipping and tucking, evidenced by the fact that his head closely resembles a balloon — a balloon found at one of those aforementioned birthday parties.

Because Putin grows old, grows old, per T.S. Eliot. And that, more than anything, is what will ultimately defeat him. Just as you can’t take it with you, you also can’t invade any more countries when you’re dead. Can you?

Because he knows the end may be nigh, Putin is in search of a legacy. All leaders do that. Justin Trudeau, for example, actually formed a coalition government with the NDP last week to give himself enough time to craft a legacy. (Because his only legacy, so far, is serial scandal and serial blackface.)

The New York Times’ Roger Cohen published a magnum opus about Putin’s own legacy hunt on the weekend. Cohen’s piece is as long as a book, but it’s meticulously-researched and well worth reading. It’ll tell you more about Vladimir Putin, and Vladimir Putin’s plans, than anything else out there to date.

Here’s a sampling of what Cohen reported:

And that last observation may be so, for now. While returning Ukraine to Mother Russia has taken more time than anyone thought, Putin has not yet abandoned his obscene, genocidal war. He hasn’t won, but he hasn’t lost, either.

But he has dramatically miscalculated. All the things he most wanted to avoid — a unification of NATO, a stronger European Union, a militarized Germany, a teetering Russian economy, and a defiant Ukrainian people — have now happened.

Over the weekend, U.S. President Joe Biden declared that Vladimir Putin “cannot remain in power.” His aides later denied that Biden is seeking regime change in Russia, but the president’s meaning could not have been more clear: He wants Putin gone. Dead or alive. But gone.

He will be. If not via an assassin’s bullet, or a Kremlin coup, or a popular uprising, Putin will be gone.