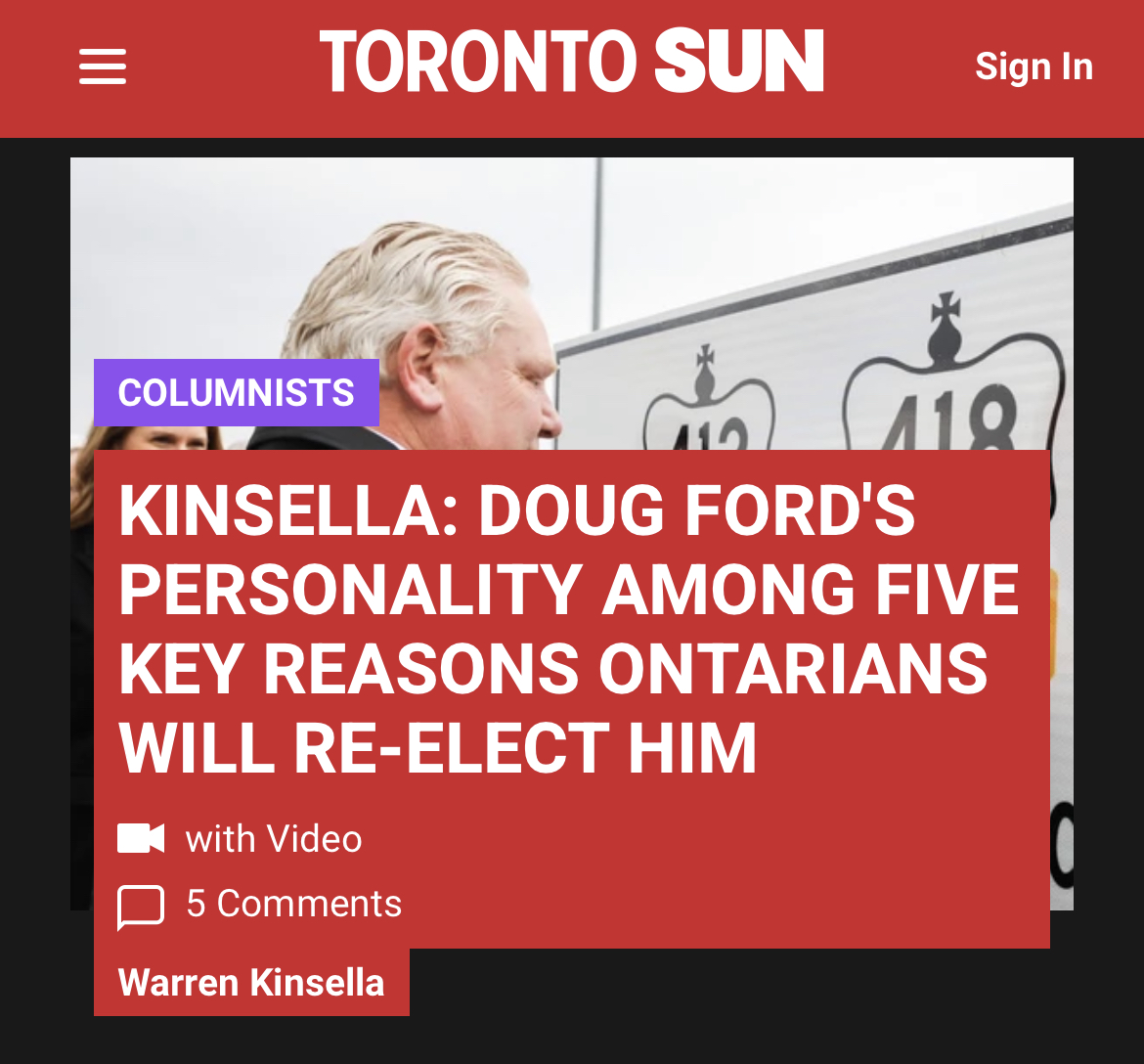 My latest: Ford will win

And, before we get this little column going, further full disclosure: my firm sometimes lobbies his government, just like we did all the ones before his.

Also: we’re on the Ontario government’s standing offer list for communications. But we haven’t gotten a stitch of work from him. Zero, zippo, zilch.

That’s okay, because here’s a bit more disclosure: I like the guy. My mom, an Irish Catholic Montreal Liberal, loves him. Asked her why.

And he does, he does. If you’d told me that a few years back, when Ford and I would duel to the death on radio and TV political panels, I would’ve said you were crazy. Back then, I didn’t really know him, and I figured he was one of those Trump-style ideological right-wing types.

I was wrong, wrong, wrong. He ain’t. And I’m not the only one who knows it, now. Polls say he is cruising towards a second big majority government on June 2.

1. Ford Nation. I don’t like the name, because it sounds a bit boasty to me. But that’s quibbling. Despite the criticisms of the pink-skinned, Blundstone-wearing deepest Annex types, I’d wager that Ford’s base is more racially diverse than that of any other conservative politician in North America. I first saw it almost a decade ago, during a Toronto mayoral race. Downtown progressives sneered that he was a racist – but Ford had the support of 70% of people of colour. Ford Nation is like the United Nations: everyone is represented there.

2. The pandemic. He’s made a misstep or two during the pandemic — the quickly-rescinded playground and police lockdown comes to mind — but, for the most part, Ford has done a pretty good job throughout the past two tough years. His critics didn’t expect that. They assumed he hated government, and he’d leave people to the ravages of the virus. He didn’t. He pushed vaccinations and sensible public health measures, and he pushed hope. You could see, too, that the COVID-related death toll weighed heavily on him on TV every morning — his voice raw, his face ashen. He didn’t care what his haters said, but he sure seemed to care about keeping them alive.

3. His government. The pandemic was the biggest economic, cultural and personal event of our collective lifetimes. Everyone had an opinion on it, because everyone was hurt by it. More than once, the hardcore Leftie types were mad at Ford for not shutting everything down. Simultaneously, the hardcore Rightie types were mad at him for shutting anything down. I spoke to a former Liberal prime minister about it. “When the hard Left and the hard Right are both mad at you, it’s a good day,” he said. And it’s true: Ontario voters are smack-dab in the middle of the road. That’s where Ford mostly is, too.

4. His opponents. Ontario New Democrats grumble that their leader, Andrea Horwath, has lost too many elections and needs to go. But they don’t do anything about it. Ontario Liberals give interviews to the Toronto Star — anonymously — and agree their guy, Steven Del Duca, is “not a leader.” During the pandemic, when the consequences were literally life-and-death, Horwath and Del Duca were up and down like a toilet seat — demanding masking, then holding mask-free superspreader rallies (as Del Duca did). Or falsely claiming public sector workers had “a Charter right” to refuse vaccinations (as Horwath did). Right now, the Ontario election is a battle for second place, between the Dippers and the Grits. And they act like Ford has already won. But he doesn’t — it’s not his personality to take anything for granted.

5. His personality. So, this column ends where it started: on Doug Ford’s personality. Way back when, I used to crap all over Doug Ford in the media. I went after him every chance I got. And then one day, when I got in a whole lot of trouble for a stupid tweet, guess who was the first person to call? Yep: Doug Ford. “Warren, you’ve kicked me and my brother around a lot, but we respect you,” he said. “Hang in there.”

I’ve heard dozens of similar tales from dozens of other folks, of all political persuasions. Doug Ford, they agree, is one of the best retail politicians Canada has ever produced. (My former boss Jean Chretien, naturally, is the best. And Chretien and Ford know and like each other, tellingly.)

Are other factors at play? Sure. Justin Trudeau’s re-election helped Doug Ford, because Ontario voters prefer to have different parties representing them in Ottawa and Queen’s Park. And Pierre Poilievre’s crusade to turn the Conservative Party into a wing of the far-Right People’s Party doesn’t hurt, either: it makes Ford look like a kind-hearted centrist.

Except he already was. He is.

And, full disclosure: that’s why he’s going to win again.