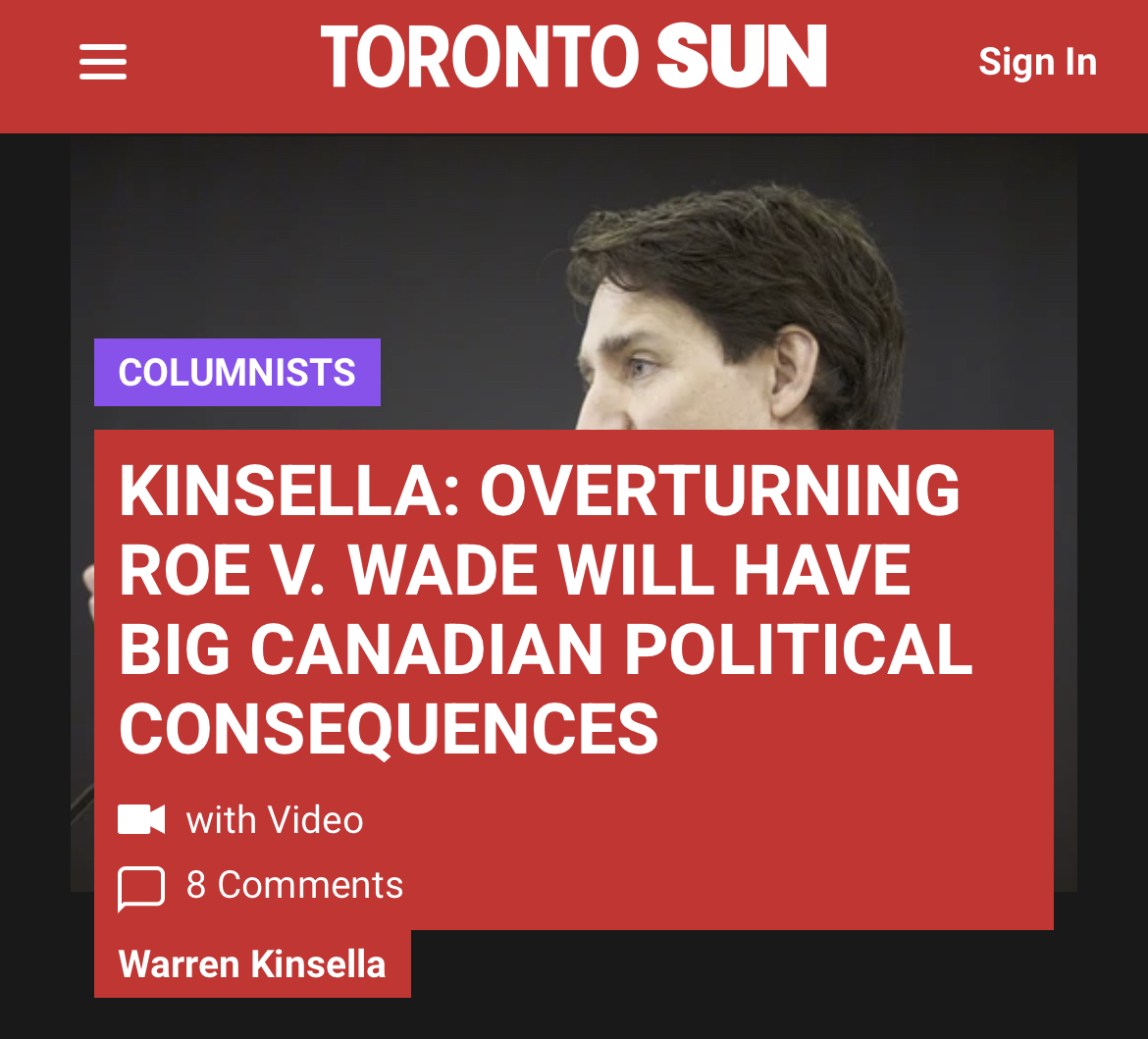 My latest: abortion is back

Think the U.S. Supreme Court decision to outlaw abortion is irrelevant to Canada?

Because Politico’s bombshell revelation Monday night — a leak of a draft opinion of America’s highest court on the seminal decision that legalized abortion in the United States, Roe v. Wade — is going to have profound consequences for many politicians. On both sides of the border.

In the U.S., overturning Roe v. Wade isn’t a political earthquake — it is bigger than that. It’s something beyond description. It’s akin to the shifting of political tectonic plates.

Among other things, it will lead to many Democratic Party victories in the coming mid-terms. That’s important, because Joe Biden was heading to an electoral pounding in November. No longer: He now has a wedge that will hasten the end of Republican careers.

It’ll lead to demands — which Biden may grant, after the mid-terms — to enlarge the high court and load it up with progressive jurists. That’s a given.

And how Politico got their hands on a draft Supreme Court opinion? That’s big, too. The resulting inquiries will certainly preoccupy lawyers and politicos (and maybe detectives) for years to come. Why? Because such a leak is something that has never, ever happened before. It means the Supreme Court justices are at war with each other, basically.

But overturning Roe v. Wade won’t just shake up American politics. It is going to have big political consequences up here, too.

Because if you think Justin Trudeau will hesitate to use abortion against his conservative opponents, you are dreaming in Technicolor. Abortion is the ultimate political wedge — one that mobilizes most Canadian women, of all stripes, to vote to maintain control over their bodies.

For Pierre Poilievre, the frontrunner in the Conservative Party leadership race, the return of the abortion debate is very, very unhelpful. For years, the Ottawa-area MP has enjoyed the support of the Campaign Life Coalition, the powerful lobby group that wants to outlaw abortion, gay marriage and euthanasia.

On its web site, the Campaign Life Coalition gave approving green check marks to Poilievre for voting for bills that would make it an offence to “kill or injure a pre-born child” — and to “protect women from coercion to abort.” For most of his political career, Poilievre has opposed abortion, full stop.

Only very recently — as the prospect of seizing the Conservative leadership grew larger — did Poilievre abandon his previous positions on abortion and gay marriage, thereby angering the Campaign Life Coalition. But, under his leadership, he still admits he would permit MPs to bring forward laws to criminalize abortion.

That matters. Because, even if Poilievre has magically experienced a whiplash-inducing reversal on abortion, the likes of MP Leslyn Lewis have not. Lewis is a social conservative extremist — and her presence in the upper ranks of the leadership contenders can’t be dismissed. Lewis doesn’t hide her opposition to abortion, saying: (There’s) nothing hidden about it.”

But do you think Trudeau will ever hesitate to use a divisive social issue to pulverize his Conservative opponents? In 2015, 2019 and 2021, did the Liberal leader ever seem reluctant to beat Tories with whatever club was laying nearby, however cynical that may be?

No and no. Trudeau has used abortion to hobble Conservatives before, and he’ll do so again. The reversal of Roe v. Wade guarantees it.

On Monday night, you could almost hear the corks being popped on the Veuve Clicquot at the Office of the Prime Minister.

Because abortion is back.