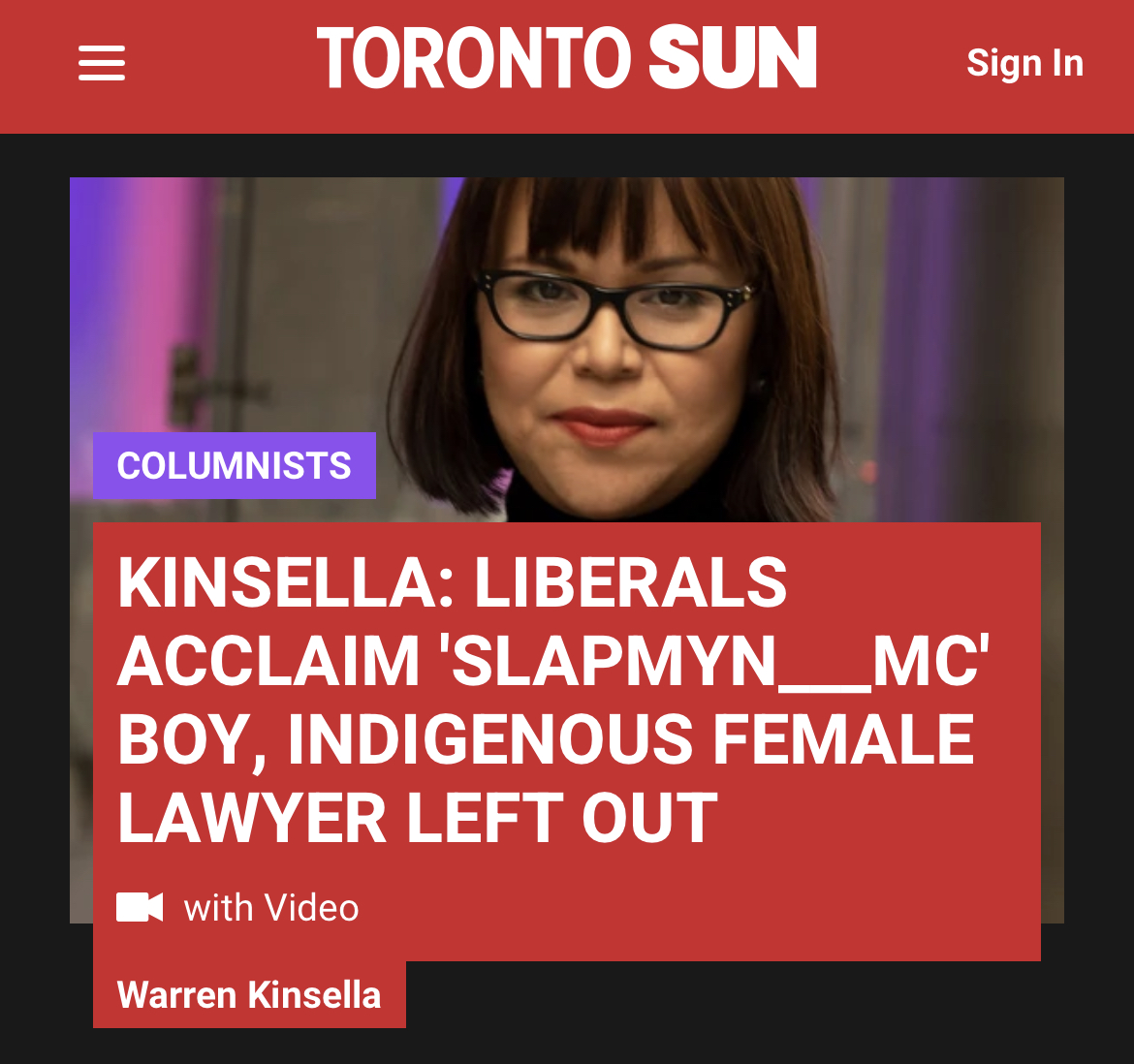 My latest: OLP’s “SlapMineNuts” candidate is slapped – out

SlapMineNutsMC’ has been slapped — right out as an Ontario Liberal candidate.

Following an exclusive report in the Toronto Sun, Sudbury-area high school student, Aidan Kallioinen, has been told he will not be permitted to run as a candidate for the Ontario Liberals in Sault Ste Marie in the June 2 election.

Responding to this newspaper, Andrea Ernesaks, the party’s press secretary wrote: “These reports were not disclosed to us in the vetting process. We have spoken to Mr. Kallioinen and have informed him that he will not be running as part of our Liberal team.”

The “reports” Ernesaks refers to, and which reported earlier in the Sun, revealed that Kallioinen referred to himself in online chats as “SlapMineN___MC” and had participated in discussions where participants joked about people “dying of AIDS.” The Sun has not verified whether Kallioinen was one of the participants joking.

The former Liberal candidate was chosen over Naomi Sayers, an experienced and respected Indigenous lawyer. Sayers has been legal counsel to one of the largest electricity providers in Canada, and is called to the bar in Ontario and Alberta.

She has appeared before courts and tribunals at all levels. Her work has been cited at the Supreme Court of Canada, and she has been a university professor at Algoma University.

They did so on Monday night, news outlet Soo Today reported, with 16 minutes notice given to local Liberals. “Aidan Kallioinen will be acclaimed as the candidate of the Ontario Liberal Party in the electoral district of Sault Ste. Marie,” declared Mike Cavanaugh and Jordan Hudyma in an email sent to party members.

The appointment contradicted Del Duca’s own pronouncements about elevating female candidates to the legislature. Just a few weeks ago, Del Duca issued a statement on International Women’s Day, and said: “Ontario Liberals will fight to make sure our province has an equitable recovery. We are also committed to ensuring that come this June, at least 50% of our candidates are women.”

Sayers is active on social media. In the past, she did sex work, which she has not hidden. The law societies of Ontario and Alberta evidently weren’t concerned, because they both admitted her to the bar.

Nor did the Ontario Liberals ever raise Sayers’ sex worker past with her.

Instead, they denied her candidacy because she disclosed too much material to them.

Charrissa Klander, the “nomination commissioner” for the Ontario Liberals, wrote to Sayers and said: “Given the fact that we are days away from the election being called, and we will be unable to complete full vetting, I am writing to advise you that I have instructed staff to stop further review of your nomination application.”

There was an “enormous volume of material” provided by Sayers, Klander complained.

So, Sayers was out. A few days later, the Ontario Liberals picked young Aidan Kallioinen, who had scrubbed his own social media — but not all of it. Now he’s out, too.

Naomi Sayers is now running as independent in Sault Ste. Marie. She’s expressed sadness about what Steven Del Duca’s party did to her.

“People are upset and not happy with how the party treated me. Those are the facts — I can’t change the facts,” says Sayers. “But I am happy to have my name on the ballot as an independent candidate, and I’m looking forward to participating in the democratic process to bring a voice for Sault Ste. Marie to the legislature.”

– Kinsella ran the Ontario Liberal war room in 2003, 2007 and 2011, and has been an adjunct professor at the University of Calgary’s Faculty of Law.