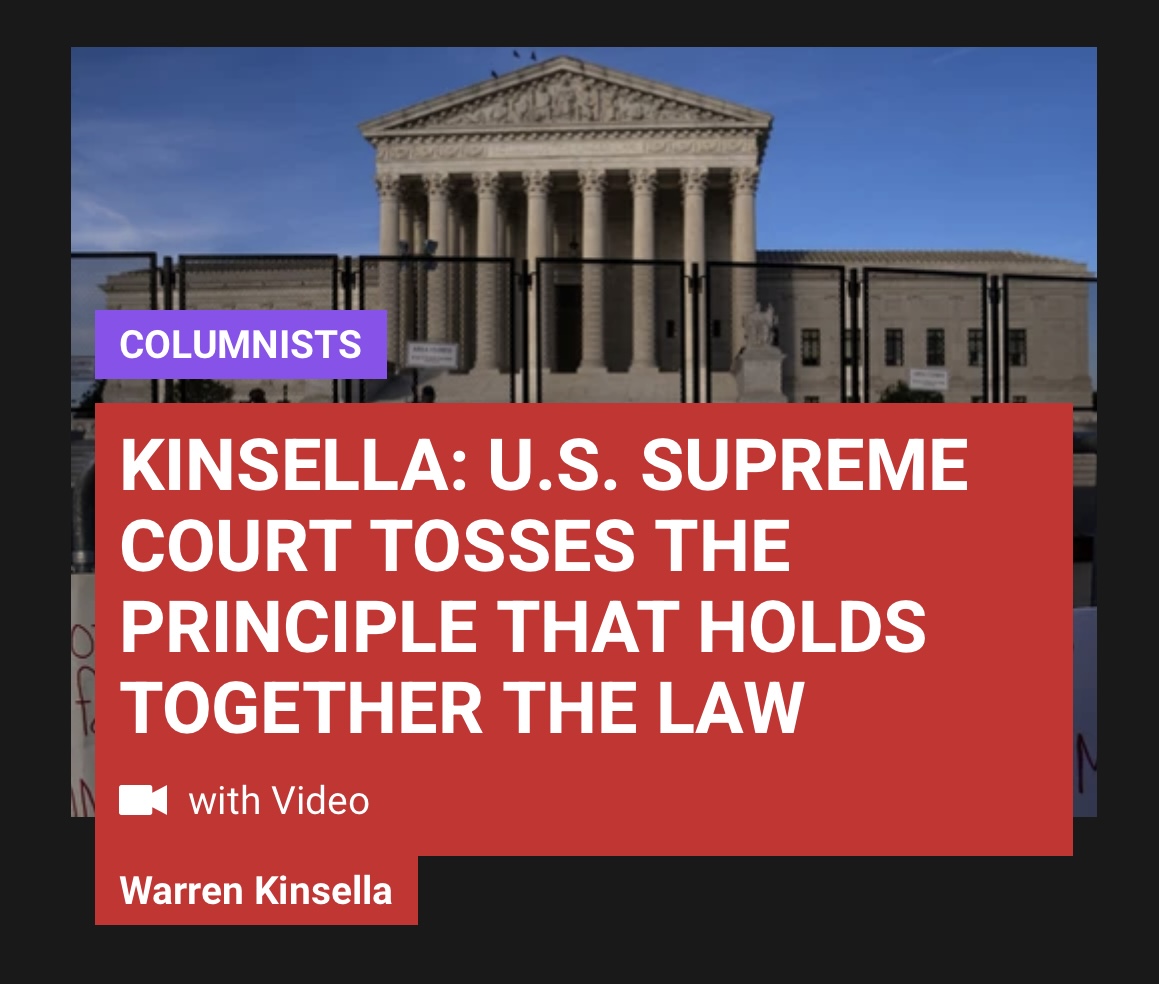 My law: the end of law

What if there are no more rules?

What if there are no more laws? No more precedents, no more constitutions, no more charters?

What if the law just becomes what people in power say it is?

That – along with the obvious implications for American women – is one of the most dangerous consequences of the US Supreme Court’s decision to toss out Roe v. Wade last week. For half a century, Roe v. Wade has permitted American women to legally obtain safe abortions.

And now that’s gone. A decision that had had the effect of a constitutional proclamation – that is, untouchable in law – was tossed out. Tossed out by three unelected, unaccountable partisan judges who had lied about “stare decisis.”

“Stare decisis” is a legal doctrine. It’s Latin, and it basically means “to stand by things decided.“ Stare decisis is the immutable legal rule that courts will stick to established precedent when making decisions.

Last week, the Supreme Court of the United States of America tossed stare decesis in a dumpster. They threw out the principle that holds together the law, and democracy, too. And that is very, very ominous.

The law comes from statute, passed by legislatures. But the law also comes from wise decisions made by judges in court rooms. Some of those decisions can be centuries-old, but still stand today.

In the United Kingdom, for example, there is Bushel’s Case, from 1670, which prohibits a judge from trying to coerce a jury plot convict.

There’s Entick v. Carrington, in 1765, which imposed limits on the power of Kings and Queens.

There’s the Carlill case, in 1893, that established the rules for creating contracts.

In the US, there’s been cases like that, too. The 1914 Weeks case, which said a person can’t be prosecuted with evidence obtained illegally. Or Brown v. Mississippi, in 1936, which said that confessions cannot be obtained through police violence.

In Canada, we’ve had no shortage of landmark legal decisions as well. Hunter v. Southam, in 1984, which threw out evidence when the authorities rampages through media newsrooms to find evidence.

Or R. v. Sparrow, in 1990, which held that Indigenous people had rights. Or the Feeney case, in 1997, which determined that the police can’t enter your house without a warrant.

It’s hard to imagine all of those rules being tossed out on the whim of some partisan hack. But that is what happens when unelected, unaccountable judges are given unlimited power, and an unhinged view of the law: they can change society with the stroke of a pen. And there’s not a damn thing you can do about it.

There are many, of course, who are happy that the US Supreme Court ended abortion rights for American women last week. They feel that they won, and they arguably did.

But if “stare decisis” no longer exist, how will conservatives feel if this or a future Democratic president decides to stack the high court with his or her own partisans? What if that future court allows the authorities to seize private property without compensation, or take away gun rights, or declares pedophilia a legitimate form of sexual expression?

The loss of stare decisis cuts both ways, you see. If courts no longer feel bound by well-reasoned, long-accepted legal precedents, the law will become a joke. It will become only what those with power says it is. It will become an abomination.

And make no mistake: the US high court, no longer bound by precedent, has signaled it is going after gay marriage and equality rights next. When there are no more rules, the rules only become what the powerful say they should be.

The Americans are adrift in dark, dark waters, and God knows where they will end up.

[Kinsella has been an adjunct professor at the University of Calgary’s Faculty of Law.]