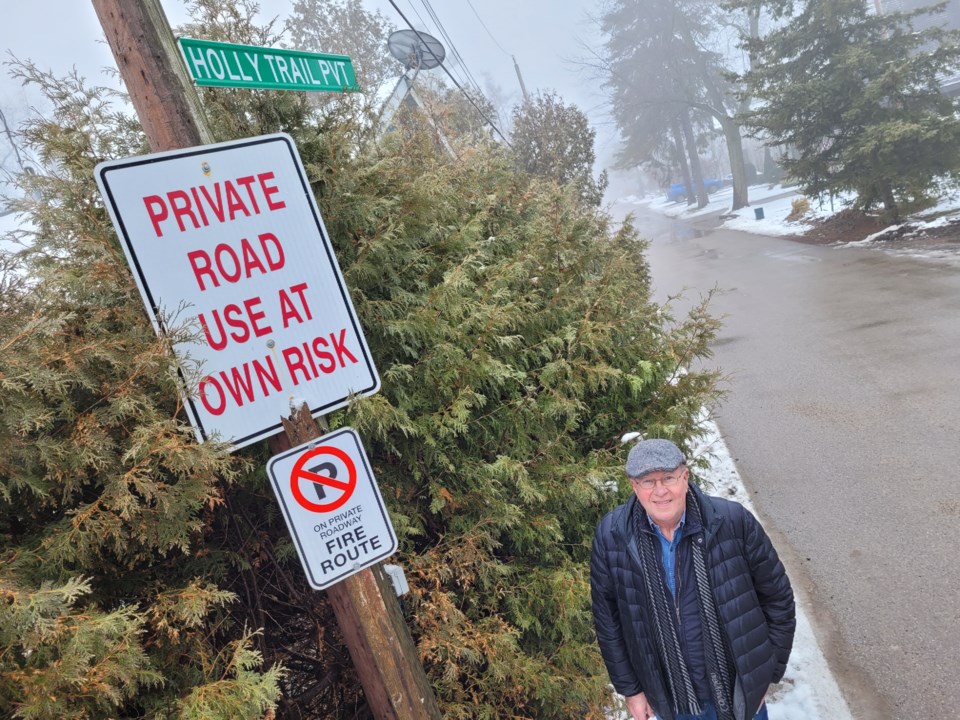 Swastika Trail is no more

PUSLINCH – Randy Guzar has waited months for this day.

As fog and rain descended over Puslinch Lake early Tuesday, Guzar woke to learn Puslinch township staff had followed through on a promise to change the sign at the end of his street from Swastika Trail to Holly Trail, ending a decades long effort to remove the street name that for many is offensive because of its indelible link to the Nazi regime.

“After decades of advocacy, outreach, and struggle, we are encouraged that Puslinch Township has renamed Swastika Trail – taking a first step towards an inclusive future for our community,” Guzar said in a statement to CambridgeToday.

In October, Puslinch township council voted 4-1 in favour of the name change, setting in motion what Guzar calls an enormous amount of work by township staff to ensure the old name was removed and the new name made its way onto the tax roll, address lists, maps and into dispatch systems for emergency response.

He praised the work of the township for making it happen.

“Additionally, I hope to extend my thanks to leaders including former Senator Linda Frum for her tireless advocacy, MP Bryan May for sponsoring our petition, the Friends of Simon Wiesenthal for their support, and Jon Lee, John Danner, and Warren Kinsella and Daisy Group for their assistance.”

Residents of the trail have spent the last few months switching addresses over on everything from licenses to credit cards, and despite some hiccups along the way, Guzar said it was a small effort with a big reward.

Canada Post will continue to deliver mail addressed to Swastika Trail for the next year.

“I am grateful for the support of fellow Puslinch residents and Canadians from across the country who offered their support through petitions, statements, deputations, and letters – to name a few. Each of them has made a lasting contribution to our community.

Support for the name change grew in 2021 when Guzar and some of his neighbours asked Cambridge MP Bryan May to take his 1,800-name petition to the House of Commons.

Then Warren Kinsella took up the cause to rename Swastika Trail.

The former journalist, Toronto lawyer and former Liberal Party strategist who founded the anti-hate group Standing Against Misogyny and Prejudice (STAMP) and his consulting firm The Daisy Group agreed to work pro-bono for the cause, saying he wanted to move public opinion on the name change, not only in Puslinch, but for the northern Ontario town Swastika as well.

He enlisted the help of Friends of Simon Wiesenthal Centre to encourage Puslinch councillors to vote for what they believed was a “no brainer” in removing the name they and others consider “extraordinarily offensive to the spirit and intent of what Canadians stand for.”

The effort gained significant traction in June 2021 but took well over a year to be considered by Puslinch council, with some members opposed until the final vote.

Swastika Trail neighbours who were opposed to the name change pointed to the fact that the swastika is a “symbol of peace, prosperity and good luck,” and continues to be used by Hindus, Buddhists and Jains around the world.

They also argued the private road was named in the 1920s, years before the rise of the Nazi party in Germany.

But Guzar and others said it didn’t matter, and were tired of being embarrassed and compelled to explain whenever they were asked to provide their address.

They argued that since the symbol was co-opted by Hitler’s regime it had come to represent hate and antisemitism in the decades that followed the Second World War.

“Swastika Trail was a reminder of the unspeakable losses felt by some of our neighbours, and so many around the world,” Guzar said. “In this time where hatred continues to spread, it was critical that our municipality act in a manner which showed its opposition to discrimination. While there is no simple means of ending hatred, we can each do our part to make the world a little bit safer – and that’s what a majority of our council voted to do.”

“It is with great pride and gratitude that today we can all finally say, it’s a beautiful day in our neighbourhood!”