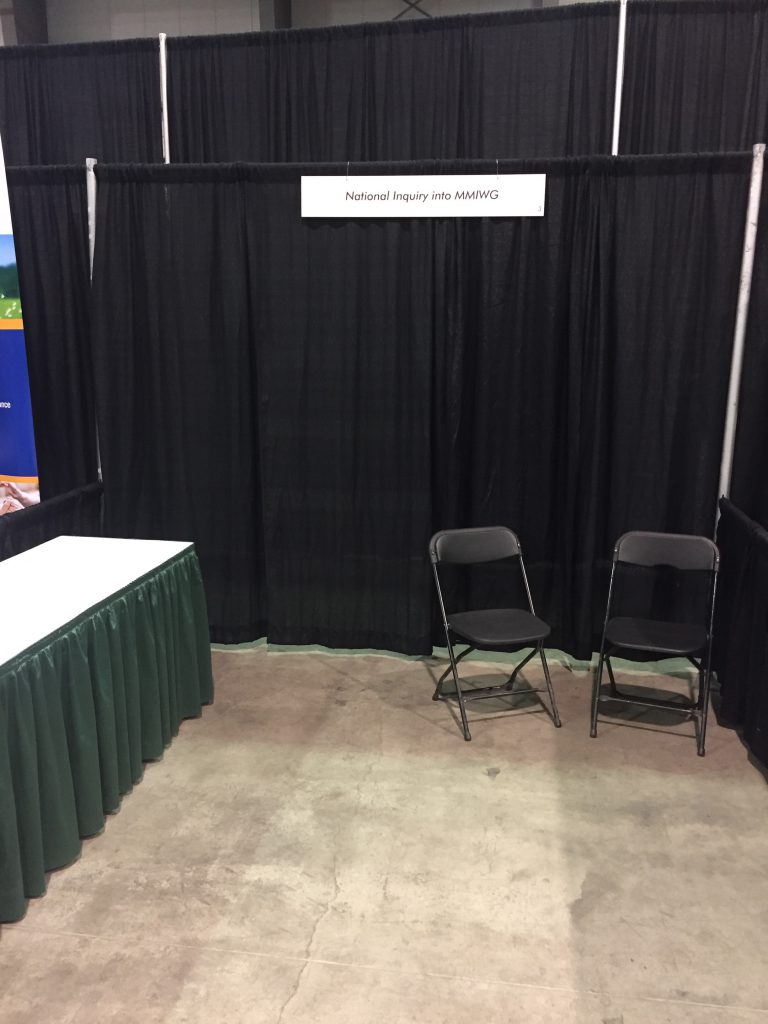 July 2017: the Assembly of First Nations have gathered for their 38th general assembly in downtown Regina.

Thousands of indigenous people from across Canada are in attendance. Along with speeches, seminars and cultural events, there is a trade show.

Dozens of businesses and organizations have paid thousands for booths to advertise their services and wares at the trade show. One of them is the inquiry into Missing and Murdered Indigenous Women and Girls.

The booth is empty.

There are two folding chairs, a few folding tables, and a sign: “National Inquiry into MMIWG,” it says. Photocopied.

No one is staffing booth. There is no literature, no displays, nothing.

My wife is a paid attendee at the AFN general assembly. She tries to take a picture of the empty booth with her iPhone, and an angry woman approaches her. The angry woman demands to know why she is taking a photo. Dissatisfied with the answer she gets, the angry woman goes to complain to organizers.

The next day, the booth is still empty. No staff, no materials, nothing.

My wife and I happen to be visiting the then-Premier of Saskatchewan, Brad Wall, that same day. We show him the picture. He shakes his head. “That is a disgrace,” I tell him. He doesn’t disagree.

And “disgrace,” generally, has remained the best word to describe the Trudeau government’s inquiry into the murders and disappearances of thousands of indigenous woman and girls. It is a multi-million-dollar disgrace, in fact, one that the father of the Minister of Justice – himself a hereditary chief – called “a bloody farce.”

“I would think that young [Justin] Trudeau should darn well know that this thing is not working and he should fire these people,” Chief Bill Wilson told CBC a few weeks before AFN’s general assembly.

“It just makes me sick. People have been sitting on their hands for…months, spending a good ton of money and they haven’t done a doggone thing.”

And, in the intervening months, the inquiry has more or less continued to do just that: spending a good ton of money, and not “a doggone thing.”

A summary of the myriad controversies that have followed the inquiry everywhere it goes:

And then, last week, the latest revelation: the inquiry issued a multi-million-dollar, sole-source contract with a law firm. A contract that stinks.

The unseemly little contract was discovered by Brian Lilley of Ottawa’s CFRA. Reports Lilley: “It’s a staggering amount for a contract that only lasts 8 months. The law firm McCarthy Tetrault is being paid $5,320,766.60 in a sole sourced contract. A contract worth almost 10 per cent of the inquiry’s $54 million budget,” he writes.

The sole-sourced contract was to run from September 6, 2017 and end on May 15, 2018. It wasn’t put up for competition because, Lilley reported, it supposedly related to “Consulting Services Regarding Matters of a Confidential Nature.”

As such, Lilley wasn’t told why McCarthy Tetrault was handed this sole-sourced, “confidential” sweetheart deal. We did figure out the math about the cost, however. Lilley worked it out. “[The] $5.3 million fee is for a contract that lasts just 251 days. That works out to $21,198.27 for each day of the contract. If we assumed a 10-hour work day, that would mean McCarthy’s is billing out at $2,119 per hour.”

Read that again: $2,119 an hour. Considering that the standard rate is $235 an hour, this contract is an obscenity.

(Full disclosure: I know the usual hourly rate because that is what I was periodically paid to work with First Nations for Liberal and Conservative Prime Ministers as a Ministerial Special representative – until I was terminated by inquiry champion Carolyn Bennett, without explanation and over the objections of officials, immediately following the October 2015 general election.)

More than two thousand dollars an hour. As the Minister of Justice’s Dad said, this “inquiry” was and is a farce. It should make everyone sick.

After this writer condemned the contract online, a spokesperson for the inquiry wrote to the Hill Times. The spokesperson wrote that the contract is for “the electronic processing and analysis” of documents by a little-known McCarthy Tetrault business arm. As in, documents provided by witnesses.

Get that? We are paying millions for some clerks to “process documents.” Not even professional legal advice.

Well Carolyn Bennett give us answers?