How to win tonight’s #ONpoli debate 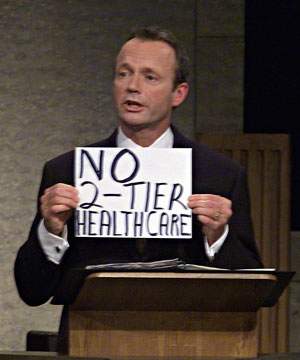 What not to do.

From The War Room, available at all fine bookstores near you:

Televised leaders’ debates — like the one in which Reagan clobbered Carter — show us all why this narrative stuff is so crucial. TV debates give candidates a chance to stress basic campaign themes, and in front of what is usually the biggest audience of the campaign. They also let candidates depict their opponents’ campaign message in an unflattering way. Contrary to what some media pundits claim, debates are not about defining moments (although, admittedly, Reagan’s “are you better off” line was certainly a defining moment). Debates are about ratifying your side’s issues — and the issues in the campaign — and looking good at the same time. They’re not about defeating the opposition’s claims, proving something, or answering reporters’ questions, either. They’re about getting your story — your spin, your message — heard by as many people as possible. Full stop.

Now, keep in mind that a single night’s debate is not going to change voters’ minds about the key issues. To win, you first develop and then repeat your campaign’s theme. That’s it, pretty much.

The most successful presidential and prime ministerial performers enter debates with a single clear message they wish to get across — and they use questions and interruptions to return to, or highlight, their single key message. As Dick Morris has noted, a simple way to measure success is to count the number of debate minutes devoted to your key messages (eg. for a liberal like me, health or the environment) and not the opposition’s (eg. for a conservative, tax cuts or “getting tough on crime”). You win when your story has taken up the greatest number of minutes. Before they head off to bed, you want the people who tuned in to conclude that your guy or gal is humble, energetic, trustworthy, passionate, positive — and that he or she is “fighting for me.”

Losing, on the other hand, is easy. If a liberal guy or gal performs well on an issue like “getting tough on crime,” and the other side doesn’t, it doesn’t matter that the liberal did a fabulous job presenting his or her case and sounded like the best debater in the history of planet Earth. The “getting tough on crime” issue is their issue. The other side will always sound more credible when the subject matter is their issue.

During the 2000 Canadian election campaign, which saw Liberal leader Jean Chrétien win more seats than he won in 1997, I was part of a little group that helped to prepare him for the TV debates. In the mock debates, I played the role of Canadian Alliance leader Stockwell Day, which was quite amusing. Chrétien certainly thought it was.

I sat in on quite a few meetings of the debate preparation group, and I didn’t find a lot of it particularly helpful. A couple of the people in the group were idiots. And a lot of the people gathered around the table and talked a lot about their theories on defining moments and so on, but I thought it was a lot of crap. To me, defining moments just happen, like when you win the lottery. You don’t spend time planning a lottery win. Either you win it or you don’t.

I was frustrated, so I wrote a little memo, and I gave it to Jean Chrétien. I told him that it was about telling people what his story was, telling the story, and then reminding people that he just told them his story. I also wrote another very brief memo, part of which read like this: “Our key message is about choosing between two messages, one of which is extreme. It is choice between a reasonable and reasoned Liberal alternative on taxes (big, and better for moderate and middle income Canadians) and Stockwell Day’s extremist choice (tax cuts which are only better for a select few); between a Liberal alternative on health care (well-funded, national standards with all that implies, etc.) and Day’s version (privatized, ten-tier, no national enforcement of standards, etc.); and other issues, as necessary.”

Health care, education, and the environment were all good things to talk about, so that’s what Chrétien did, even though the other party leaders were attacking him like a pack of crazed, rabid dogs. Chrétien, meanwhile, effectively avoided talking about things that were bad for him. Stockwell Day, however, persisted in going on and on and on about things that were unhelpful to his cause — to the point, even, of repeatedly holding up a little handmade sign in the English language debates, to protest that he had been misunderstood about health care. “No Two Tier Health Care,” it said. It looked like it had been written in crayon. At that point, there was only one way we Liberals could have managed the dialogue better, and that would have been to make up the little “Two Tier” sign ourselves and request that Day hold it up on TV.

Political storytelling — political spinning — requires some intestinal fortitude. It’s important that one doesn’t whine, and former Canadian Alliance leader Stockwell Day had a penchant for whining a lot. Politics is a nasty, unpleasant, mean-spirited business, which is presumably why some of us are drawn to it. (Many of us are nasty, unpleasant, and mean-spirited people.)

Stockwell Day had come from my home province of Alberta, which has been properly likened to a one-party state. Once on the national scene, he quickly distinguished himself as a youngster who could not take a punch without complaining about it to the school principal. (In that way, he resembled future Liberal leader Paul Martin, but with a great deal less formal education.) As we continued to try and ensure that our issues dominated the political discussion, a thought occurred to us: we were dealing with a great big, wet, bona fide fish here. So we kept putting interesting things at the end of our fishing line — things like health care, or pensions, or abortion, or referendums. And Stockwell Day, being a hungry little fish, could not resist taking the bait. He’d complain about all this, sure. He was being misconstrued and misquoted and misunderstood, he whined, by the worldwide Liberal conspiracy. It was unfair. It was mean.

“Call off your attack dogs, Mr. Chrétien,” was one favourite headline — which we promptly enlarged and posted on the war room wall.

To the very end, however, Stockwell Day couldn’t resist blathering on and on about his own negatives. And his negatives, of course, were our positives. That, as my mother likes to say, is how you get your ass kicked on Election Day. Stockwell Day helped us get a bigger share of the popular vote than we did in 1997. That isn’t easy to do, but he did it.

To recap: facts tell, stories sell. And when you’ve got a winning story, stick to it. Don’t talk about the other guy’s story.