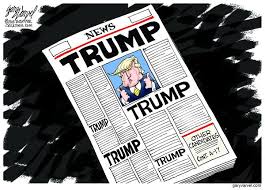 Donald Trump is the winner

A bit from next week’s Hill Times column.  Comments are open.

Donald Trump won.  He beat us all.  He has dominated the politics of this era like no other, standing bestride it like a Cheeto-coloured colossus.

In Britain’s The Times, just two stories – one about their World Cup loss, naturally, but the other is about Trump, coming to have tea with the Queen.  In Germany, the verdict in a homicidal neo-Nazi’s trial is ubiquitous – and then there is Donald Trump coverage, above or near every fold. And so on.

…At this point, in this year in this Century, winning is simply defined as sheer dominance.  Winning is not just securing power – it is wielding power in such a way that no one else can be heard anymore.

And that is why Donald Trump is the winner: he does not merely dominate the news cycle.

He is the news cycle.