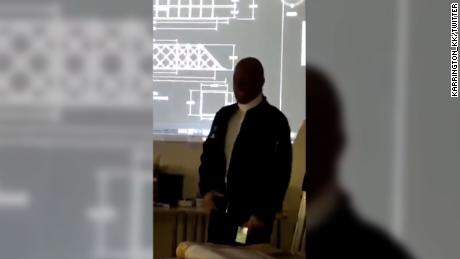 That’s how you do it, Canada

You don’t hire him again. You suspend him.

A high school teacher has been placed on administrative leave in California after he wore blackface to school on Halloween, according to the Milpitas Unified School District.

A video posted on social media shows the teacher with his face painted black and dressed up in an apparent attempt to imitate the rapper Common.
Milpitas High School Principal Francis Rojas and MUSD Superintendent Cheryl Jordan said in a statement that the teacher, who has not been named, was suspended and now is under investigation for the “disparaging” act.

“In a school community where we welcome learners and families from over 50 languages who represent cultures and religions throughout the world, and where our long-standing neighborhood, Sunnyhills, was established as the first city in the nation for planned integration, it hurts to know that this type of cultural insensitivity and lack of cultural awareness still hovers in the background,” reads the statement.

Chris Norwood, the MUSD school board president, called the teacher’s actions “inappropriate, unprofessional and insensitive,” according to an online statement.
“As an African American man, the history of Blackface reminds me of the cruelty, hatred and fear my parents and people of African Ancestry have dealt with in the past and still experience today around the world,” Norwood said.