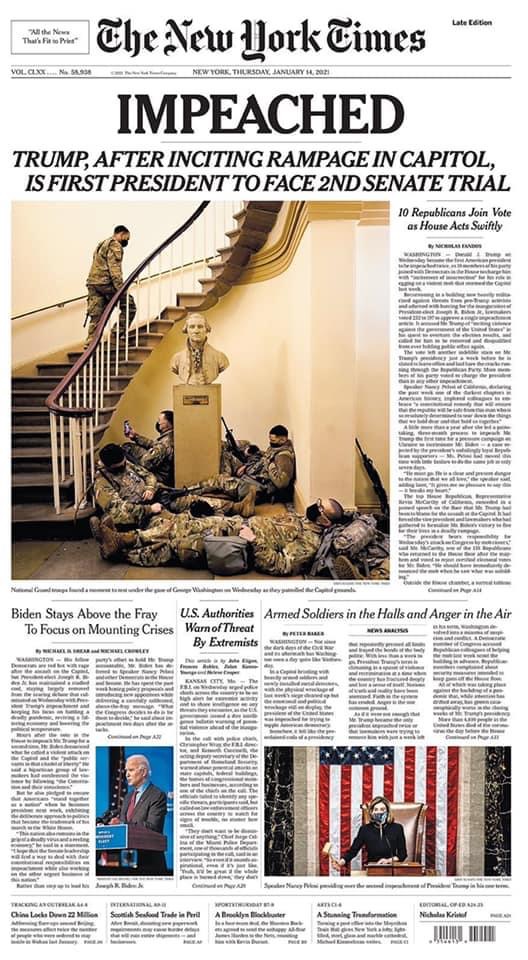 My latest: Trumpism is here to stay

They’re too late, and they don’t matter.

For sure: Donald Trump, the Mango Mussolini, will slink out of town like the carnival huckster that he is. He’s not going to the inauguration, and everyone there will be relieved by that — like when you hear your angry drunk uncle won’t be coming to wreck your wedding.

There’s a week left, give or take, and there’s not enough time — or votes — to impeach and convict. There’s not any chance he’ll be declared unfit under the 25th Amendment, either.

But Trump is like a bad stain in a good rug: you can’t get the stain out. However much civil society tries to eliminate the stench of his “presidency,” we will fail.

Because Trumpism is here to stay.

Trump and Trumpism — populist, racist, sexist, dishonest — was born in the ashes of the 2008-2009 global economic collapse. Back then, it called itself the Tea Party. It was one of two populist movements that were birthed that year.

The other was Occupy: the group of kids, mostly, who took over city parks, and didn’t have a leader or a bank account or an ad campaign.

They differed, however, in this way: Occupy atomized, and fell between the blades of grass in the city parks, never to be seen again. The Tea Party kept going.

It took over the Republican Party, squeezing out horrified New England GOP veterans.

The reality TV star, Donald J. Trump — looking down from his gilded perch on Fifth Avenue — had previously been a Democrat. But he saw the Tea Party putsch, and he saw opportunity. It needed a leader and he would be it.

He had never run for anything before, really. Not seriously. And the grifters in his circle didn’t know how to run a presidential campaign.

But Trump had two things none of his future Republican rivals would have: his “fake news” refrain and his mastery of social media.

That’s where the ratings are, and Trump understands ratings better than most. He shortly became the biggest presence on social media in the world. He would come to not just dominate the agenda: he owned it.

He’d drop a little silver ball on Twitter, and we in the media would chase it. Every. Single. Time.

But when negative stories would start to surface in traditional media, it was inevitable the president-to-be had a solution. It was all “fake news,” he’d say.

Over and over he’d say that, like an incantation, and it would do its magic. “Fake news” was a way to cast doubt on every news story Trump didn’t like.

It worked, just like the Twitter strategy did. And it inevitably led to 100,000 deranged mouth-breathers storming Capitol Hill, leaving bodies and destruction in their wake.

Impeachment or not, 25th Amendment or not, Trump will soon be gone. And for those who say we’ll never see his like again?

We will, we will.

The beast that Trump aroused is awake, and it is slouching towards Bethlehem, once again.